From the Life and Times of Washington, Volume II, by John Frederick Schroeder, Benson John Lossing and Edward Cornelius Towne, published in 1903:

General Putnam, who was on duty during the whole siege of Boston, and who enjoyed in a high degree the confidence of Washington, was entrusted with the bold undertaking of fortifying Cobble Hill, afterward called Barrell’s Farm.

It is the beautiful eminence which forms the site of the McLean Hospital.

Here Putnam, with a strong detachment of the army, broke ground on the night of the 22d of November (1775), without the least annoyance from the enemy, whose works at Bunker Hill were very near.

Next day General Heath followed with another detachment to complete the works.

The enemy were expected to sally out and attack the entrenching party, and Colonel Bond’s regiment and the picket guard on Prospect Hill were ordered to support General Heath.

But General Howe adhered to his policy of inaction till the works were completed.

It was considered at the time to be the most perfect piece of fortification constructed by the Americans during the siege, and “on the day of its completion was named Putnam’s Impregnable Fortress.”

Washington, knowing the weakness and destitution of his army in comparison with that of the enemy, considered his position at this time as extremely critical.

“Our situation,” he writes, November 28 (1775),” is truly alarming; and of this General Howe is well apprised, it being the common topic of conversation with the people who left Boston last Friday. No doubt when he is reinforced he will avail himself of the information.”

Washington thus describes the works in addition to those at Cobble Hill, which were erected in November:

“I have caused two half-moon batteries to be thrown up for occasional use, between Lechmere’s Point and the mouth of Cambridge river, and another work at the causey going to Lechmere’s Point, to command that pass and rake the little rivulet that runs by it to Patterson’s Fort. Besides these I have been and marked out three places between Sewall’s Point and our lines on Roxbury Neck, for works to be thrown up, and occasionally manned, in case of a sortie when the bay gets froze.”

In December, 1775, notwithstanding the severe cold and a heavy fall of snow, Washington caused strong fortifications to be erected at Lechmere’s Point.

The enemy did not fire upon the entrenching party.

Washington declares (December 15th) that he was unable to account for their silence, unless it were to lull him into a fatal security to favor some attempt they might have in view for the last of the month.

“If this be their drift,” he writes, “they deceive themselves, for, if possible, it has increased my vigilance, and induced me to fortify all the avenues to our camp, to guard against any approaches on the ice.”

The expectation of an assault from the enemy was now general in the army, but the works at Lechmere’s Point nevertheless went on.

A causeway over the marsh leading to this point was completed on the 16th of December, and on the 17th General Putnam, with a detachment of 300 men, broke ground near the water side, within half a mile of a British man-of-war.

A few shots from Cobble Hill drove one of the enemy’s ships down the river below the ferry.

General Heath, with a second detachment, going to complete the works begun by Putnam, was assailed by a cannonade from the enemy’s batteries, which lasted several days.

Washington and his staff visited the spot during this time, and the work was persisted in until it was completed, when it was considered as commanding Boston, so that in the event of the bombardment of the town being deemed advisable, it could easily have been effected from this point.

“It will be possible,” wrote Colonel Moylan, “to bombard Boston from Lechmere’s Point. Give us powder and authority (for that, you know, we want, as well as the other), I say, give us these, and Boston can be set in flames.”

The Sesquicentennial of American Independence Commemorative Silver Half Dollar Coin shows with an artist’s portrayal of General Israel Putnam. 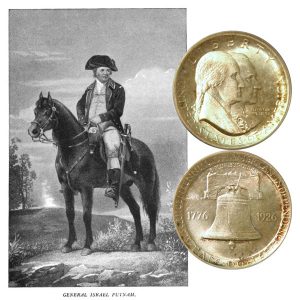