Today, the West Point Commemorative Silver Dollar Coin remembers when a private citizen erected a monument on October 2, 1879, remembering Major Andre’s execution as a spy on that date in 1780.

From the New York Herald newspaper of October 3, 1879:

On the ninety-ninth anniversary of Major Andre’s death, and almost at the hour of his execution, Mr. Cyrus W. Field caused a memorial shaft to be erected on Traitor’s Hill, in Tappan, Rockland county, yesterday.

The scene, though bereft of all pomp and circumstance, was an impressive one, and every one of the small party congregated to witness it appeared to be affected by the peculiarity of the occasion.

“Many heroes who have laid down their lives fighting for this Republic are sleeping in unknown and forgotten graves, and here we stand to mark the spot where an enemy of the United States was hanged as a spy.”

These were the unspoken thoughts, yet plainly visible on the faces of those who surrounded the workingmen engaged in erecting the memorial shaft.

While beyond Traitor’s Hill lay a landscape of unparalleled beauty the spot itself where the party assembled was a secluded orchard, lying on the very borders of New Jersey, but yet claimed as forming part of New York State.

When the hour of noon had arrived Mr. Field gave orders to place the shaft on the summit of the hill, and without the slightest ceremony the monument was presented to the view of the surrounders.

The monument, which is of the finest Maine granite, is six feet eight inches high, and along with the foundation weighs about fifteen tons.

It bears the following inscription, the lines being arranged in the order here given:

Here died October 2d, 1780,
Major John Andre,
of the British Army,
who, entering the American lines
on a secret mission to Benedict Arnold
for the surrender of West Point,
was taken prisoner, tried and condemned as a spy.
His Death,
though according to the stern code of war,
moved even his enemies to pity,
and both armies mourned the fate
of one so young and so brave.
In 1821 his remains were received in Westminster Abbey.
A hundred years after his execution
this stone was placed above the spot where he lay
by a citizen of the States against which he fought,
not to perpetuate the record of strife,
but in token of those better feelings
which have since united two nations,
one in race, in language and in religion
with the earnest hope that this friendly union
Will Never Be Broken.

On the west side of the shaft is the following:—

On the south side is the following quotation:—

On the north side are the following words attributed to General Washington, who signed Andre’s death warrant: —

“He was more unfortunate than criminal; an accomplished man, and a gallant otllcer.” George Washington.

When the workmen had accomplished their task the party of visitors left Traitor’s Hill and repaired to the De Wint House, used by General Washington as his headquarters.

There they entered the room where the Commander-in-chief signed Andre’s death warrant.

The old Dutch tiles, the immense hearth and all the surroundings brought back to the minds of the visitors “the times that tried men’s souls;” and when the numerous relics had all been carefully inspected a visit was made to the Maby tavern, now known as the “76 stone house,” where Andre was tried and confined during eight days.

The question as to the exact spot where he was executed having been mooted, three of the oldest residents of the vicinity came to the rescue of Mr. Field by proclaiming that they were present in 1821 when Andre’s body was exhumed, taken to New York, shipped on board a British man-of-war and sent to England.

The names of the old residents of Tappan are David D. Brower, John H. Outwater and John J. Griffith.

It is upon the strength of their testimony that the exact spot where Andre lay has been designated.

Mr. Cyrus W. Field has purchased thirteen acres of land, including Traitor’s Hill, and intends to create a park there, so as to beautify the neighborhood and attract visitors to a place made doubly interesting by yesterday’s event.

The West Point Commemorative Silver Dollar Coin shows with an image of the monument to Major Andre. 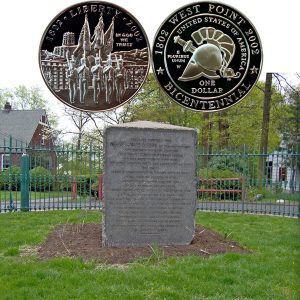