Today, the Seated Liberty Silver Quarter Coin remembers the ongoing investigation into the explosion of the steamer Riverdale 136 years ago.

From the New York Tribune newspaper of September 18, 1883:

Startling Story of a Passenger.

What He Heard the Fireman Tell the Engineer About Holes in the Boiler.

Albert H. Hyatt, formerly an express agent on the steamer Riverdale, made a statement to a Tribune reporter last night, which, if true, shows extreme recklessness on the part of the officers of that ill-fated steamer.

Hyatt, in his capacity of express messenger, made the trip from Sing Sing to this city and return on the Riverdale every day. On the day in which she was blown up he was on board the steamer as usual.

He was seated near the door of the engine-room before the steamer left her pier. He saw the fireman come up, and heard him say to the engineer:

“She has blown a hole in her boiler.”

“Is it the old hole or a new one?” asked the engineer.

“It’s a new one,” replied the fireman. “It is going just so,” and he made a gesture to indicate that the steam was coming out in a jet. “There is so much steam that I can’t stay down there,” added the fireman as he turned away.

The steamer then got under way and proceeded up the river. Hyatt was near the bow of the boat and saw large volumes of steam coming up out of the fore-hatch, which was not far from the end of the boilers.

Pretty soon the Captain came and ordered a deck hand to put down the fore-hatch. The hatch was closed tightly and the steam no longer came through to the deck. ln four minutes from that time the explosion took place.

On the Friday following the explosion Hyatt told this story to a gentleman at Yonkers, saying that it weighed on his mind and he must tell someone. Subsequently he told the same story of two other people.

The man to whom he first related the story went to Coroner Martin, but was told that the inquest was closed. The foreman of the jury in the case, however, on hearing the story, said that he would have the case reopened for the purpose of taking Hyatt’s testimony. A subpoena was issued for Hyatt, but was returned “not found.”

A Tribune reporter found Hyatt last night at his home in Sing Sing. He was disinclined to talk about the matter at first, but finally made a clean breast of it.

He declared that his statements were absolutely true, and that he was willing to testify to their truth. When asked if he was not frightened when he heard the conversation between the fireman and engineer he said: “Well, I was, but when I saw the steam coming up out of the fire hatch I felt relieved, for I thought that if the steam was escaping that way the boiler would not explode. That shows what I knew about boilers. I’ll know better next time, though.”

Hyatt is about thirty years old, and is well spoken of by those who know him. As far as the reporter was able to ascertain, he has no possible object in telling the story if it is not true, while the fact that his brother is express messenger on the Chrystenah, a steamer belonging to the same company, would be an inducement for him to keep back anything that would injure the company.

The investigation into the causes of the Riverdale explosion was resumed yesterday at the office of the Supervising Inspector of Steam Vessels, George H. Starbuck, in the Post Office Building.

The first witness was Thomas McGee, a boiler maker employed at Nyack, where the boilers of the Riverdale were repaired. He said that the repairs consisted of putting on “soft” patches. The double patch on one of the pieces taken from the exploded boiler showed that the iron was too thin to hold bolts without being reinforced. The double patch would also be likely to prevent the boiler from being eaten away more at that point. Mr. McGee, when asked to what he attributed the explosion, replied that under the boilers there was more or less dampness and consequent corrosion, and the boilers were corroded inside from the fact that water remained in them all the time, year in and year out, and he thought that there was something in the iron of the boilers, imparted probably in the puddling, which rendered it particularly susceptible to corrosion from salt water.

Nicholas St. Pierre, foreman of Mr. McGee’s shop, said that he puttwo cylindrical patches on the boilers of the Riverdale by direction of Boiler Inspection Cauldwell. He discovered at that time salt on the caulking edges of the seams. The double patch was put on because there was not strength enough in the shell to hold a single one. There was no way of his getting to the bottom of the boiler on the inside, and the only way he could test it was to sound it with a hammer. He ascribed the corrosion to the salt water, some of which lay in the boiler the year round. Some galvanic action might have taken place on account of the copper of the feed-pipe.

The next witness was Daniel W. Taulman, the engineer of the steamer. He contradicted the previous witness and said that not only the three cylindrical patched, but all the patches (excepting one which he put on himself) were put on by McGee’s man.

Tjarck Crevert, of Yonkers, assistant fireman of the Riverdale, testified that the boilers were cleaned once a week. The boilers were blown off, the hand pole plates in the “leg” were taken off and the leg washed. He said that he had been inside the boiler, but had seen no scales in it.

John McCurdy testified that he repaired the boilers of the Riverdale sometime last spring. His foreman is to appear today and testify to the particulars of the repairs.

The United States Grand Jury is making an investigation into the Riverdale explosion, with a view to indicting those responsible for the accident.

The Seated Liberty Silver Quarter Coin shows with an image of the steamer Chrystenah of the same line as the Riverdale. 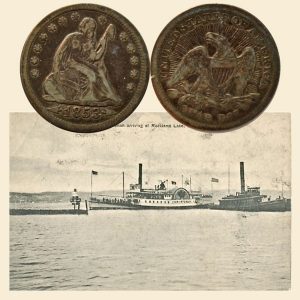