Taller won the first set 21-19, but lost the match with the remaining sets going to Presby.

From the New Haven, Connecticut, Morning Journal and Courier newspaper of August 21, 1888:

Newport, Aug. 20. No pleasanter day could be desired for the annual tournament of the National Lawn Tennis association. The sun was partly obscured by clouds and a light breeze cooled the air.

The courts were in fine condition and the greatest interest and enthusiasm were exhibited. Nearly all the tennis celebrities were present either as spectators or as participants.

It was an exciting struggle from start to finish. Chase took the first set, 7-5; Slocum the second, 6-2, and the third, 6-1. The fourth also went to Slocum, 6-2. After a fifteen minute rest the fifth and final set was begun. Slocum showed the greater steadiness and defeated his opponent, who seemed to lose heart after a close decision went against him. The set was 6-3.

Slocum’s victory may perhaps be accounted for by the fact that he was playing to save his reputation, while Chase was playing to win one. This necessitated Slocum’s playing the more desperate game.

While the Chase-Slocum match was in progress other players were contesting in the matches of the first round. They, however, had to play by themselves with no spectators to encourage them in their good plays and for the most part without any umpire.

The most interesting tennis of the first round was between J. S. Clark and F. L. V. Hoppin. Clark is one of the leading players of the country and won the Wright and Ditson tournament in 1886. Hoppin is from the New York Tennis club and is a strong player. He played a good game, but was unable to compete with Clark, who beat him three sets to one, the score being 6-3, 3-6, 6-1, 6-2.

The first match in the afternoon was between J. A. Pyerson and Allan Hubbard. Pyerson is from Chicago and distinguished himself last week at Narragansett pier by pressing Slocum very hard. Pyerson won the match by the score of 8-6, 6-0, 3-6, 6-0.

After this match T. S. Taller and Palmer E. Presby resumed their match, which they were unable to finish in the morning. Taller had won the first set, 21-19. This breaks the record in length for any set played in a tennis tournament.

This closed the playing for the day. The preliminary and first rounds have been completed with the exception of the match between Slocum and Barnes.

The tennis as a whole was comparatively uninteresting, as a large number of matches were won by default, as most of the “cracks” were pitted against men no match for them.

The Tennis Commemorative Silver Dollar Coin shows with an image of lawn tennis, circa 1887. 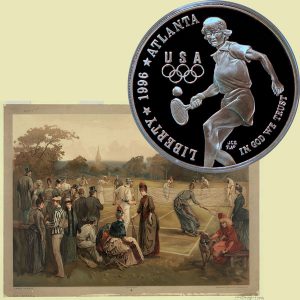