Today, the George Washington Presidential One Dollar Coin remembers the correspondence from the Baltimore Mechanical Society to the president and his reply printed in the newspaper of the day.

Basically, the letter was an appreciation for President Washington’s wisdom and efforts on behalf of the country and its citizens.

The Address of the Baltimore Mechanical Society,

To George Washington, President of the United States,

Having our hopes and expectations principally fixed on the National Government for protection and encouragement in our various pursuits, and being sensible that our happiness and prosperity, in a great measure, depends on the continuance of peace, and our being in a state of amity with the European nations now engaged in war, we beg leave, in addition to what others of our fellow citizens of this town have presented, to express the high sense we entertain of the wisdom and goodness which dictated your late declaration, of the disposition of the government to observe a strict neutrality towards the belligerent powers, who are now desolating the finest countries of Europe.

Our country lately experienced all the miseries of a desolating and cruel war, but by the interposition of a kind Providence, the Americans were enabled under your wise direction and patriotic exertions during their arduous struggle, to secure the invaluable blessings they now enjoy.

Being thus exalted to the position of civil and religions liberty, and enjoying the benefits of a free and equal government, we cannot divest ourselves of sympathy for all who struggle for the same blessings.

But the miseries of war we deprecate, and circumstanced as our country and government are, the generous French will acquiesce with the American citizens in the acknowledgment of that political truth which you has wisely enjoined, “That the duty and interest of the United States require that we should with sincerity and good faith, adopt and pursue a conduct friendly and impartial towards the belligerent powers.”

This conduct we do for ourselves adopt and mean to pursue, and we are persuaded it will be the conduct of all our good virtuous citizens.

Peace will be thus preserved, the true interest of our country promoted, happiness extended, and an asylum secured to the oppressed of every nation and country.

To the Baltimore Mechanical Society.

The language of your address shows that you have rightly estimated the purposes for which our general government was established—and so evident are the benefits resulting to the industrious citizens of every description throughout the United States, from the operation of equal laws, and from the security and tranquility with which they have pursued their various avocations, under a government of their own choice, that it becomes the duty of those who are entrusted with the management of their public affairs, to endeavor, by all proper means, to continue and promote those invaluable blessings.

And that the happiness and true interest of a people are best secured by observing such a line of conduct as will, while they discharge their political obligations, preserve to their country peace with other nations, and cultivate the good will of mankind towards them, I trust no one will deny.

If the citizens of the United States have obtained the character of an enlightened and liberal people, they will prove that they deserve it, by showing themselves to be the true friends of mankind, and making their country not only an asylum for the oppressed of every nation, but a desirable residence for the virtuous and industrious of every country.

The George Washington Presidential One Dollar Coin shows with an image of the Baltimore Mechanical Society letter to the president in 1793. 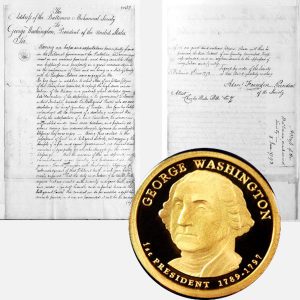