Today, the Connecticut Tercentenary Commemorative Silver Half Dollar Coin remembers when the Sons of American Revolution celebrated the preservation of the Nathan Hale School House on June 6, 1900.

From the New Haven, Connecticut Daily Morning Journal and Courier newspaper of June 07, 1900:

Of the Nathan Hale School House — Immense Gathering in Historic Old Town — Building in Which Hale Taught Preserved as a Memorial by Sons of American Revolution.

East Haddam, June 6. This was perhaps the greatest day East Haddam, once important as commanding a large West India trade and later as a manufacturing center, has ever known.

The town conducted a dual celebration, that of the two hundredth anniversary of the separation of the town from the mother town of Haddam and of the dedication of the house where Nathan Hale, the martyr spy, first taught school after his graduation from Yale college, by the Society of the Sons of the American Revolution of New York and Connecticut to the uses of the society that the building may stand as a perpetual memorial to Hale.

Today was chosen for the exercises, as it was the one hundred and forty-fifth anniversary of the birth of Hale.

The arrangements for the two events, so closely connected as to be almost one, had been going forward for weeks and were complete in every detail.

The large gathering had fully anticipated and ample provision had been made for their comfort and entertainment.

Open handed hospitality greeted the visitors on every hand.

The celebration began at 10 o’clock this morning , in Goodspeed’s opera house, where the exercises connected with the town’s anniversary were held.

They included a musical program and an historical address by Anthony E. Emory Johnson of Johnsonvllle (East Haddam) and an address by Judge Julius Attwood.

At the close of these exercises a procession was formed to march to what Is known as the Upper Landing.

The First company, Governor’s Foot Guard, acted as an escort.

Music was furnished by Colt’s band of Hartford and the famous old Moodus drum corps.

A stop was made a quarter of a mile up the street, where the Nathan Hale sehool house Is now located, on a bluff overlooking the river, and a short distance west of the main thoroughfare.

Mrs. Marcellus Hartley of New York, a grandniece of Nathan Hale, unveiled the bronze statue of Hale made by Enoch S. Woods, the Hartford sculptor, the gift of the town of East Haddam to mark the place where Hale taught in the winter of 1773-4.

The unveiling was attended by appropriate exercises.

The line of march was then continued to the building formerly known as the Maplewood Music seminary, and in the old opera house portion of the building dinner was served to the visitors by the ladies of the town.

This concluded the town part of the program, and the exercises of the afternoon were conducted by the Sons of the American Revolution.

A vast crowd assembled at the plot of ground surrounding the school house where the exercises of dedication were held.

The band gave n concert program of seven pieces. The opening prayer there was an address by Dr. Edward Everett Hale of Boston, a poem by Judge Francis M. Finche of New York, the address of presentation of the house by the New York Society of the Sons of the American Revolution to the Connecticut society by the Hon. Frederick S. Tallmadge, president of the New York society; an address accepting the building by the Hon. Morgan G. Bulkeley, president of the Connecticut society, a native of East Haddam; and an address by Richard W. Greene of New York, also a native of East Haddam, a descendant of General Greene of Revolutionary fame, and through whose efforts the building will be preserved to posterity.

The exercises were brought to a close by singing “America” by the children of the town schools under the direction of Professor R. R. Cone.

The Nathan Hale school house, as it is now known, was erected about 1773 and stood on a triangular piece of ground that afterward became the location of the village smithy under a spreading elm tree.

There has been some pretension of a park on this site during the last fifteen years.

In 1799 the building came into the possession of the Attwood family and was moved northward on the west side of Main street about an eighth of a mile.

In 1847 the building with the land on which it stood came into the possession of Judge Julius Atwood.

After his marriage he established his home near the original site of the building. His sister, Miss Harriet Atwood, and his brother Edward lived in the old building many years afterward.

After the death of Edward Atwood Miss Harriet Atwood continued to live in the house alone until advancing age compelled her to seek the society of her relatives.

In 1889 Judge Atwood gave St. Stephen’s Episcopal church, of which he is a warden, a plot of land in the rear of the house for the erection of a church, with the understanding that the building should not be moved as long as his sister lived, although it shut off most of the view of the church from the street.

Miss Atwood’s change of residence altered the conditions of the gift somewhat and last year he gave the building to the New York Society of the Sons of the American Revolution through Richard Henry Greene.

Former Governor Bulkeley purchased from W. R. Goodspeed the eight acres of land to which the building, minus the ell of modern construction, was moved.

A park has been established surrounding the building, which is now located but a short distance northwest from the church and next to the village cemetery.

The building is one story and a half high and as a dwelling house contained three rooms on each floor.

The Connecticut Tercentenary Commemorative Silver Half Dollar Coin shows with an image of the Nathan Hale School House, circa 1900s. 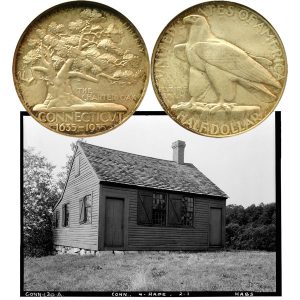