Today, the California Diamond Jubilee Commemorative Silver Half Dollar Coin remembers when the presidio at San Francisco was formally celebrated on September 17, 1776.

From the History of California, Volume I, by Theodore Henry Hittell, published in 1897:

On June 27 the party reached San Francisco and pitched their camp of fifteen tents near the spot which afterwards became the mission.

It was on the bank of the lakelet or lagoon, named by Anza that of Nuestra Señora de los Dolores, which discharged into the Ensenada de los Llorones as Mission bay had been named.

Around it spread a comparatively level and grassy plain, almost entirely surrounded by hills but affording glimpses of the bay a mile or so distant.

On the next day a booth was erected and an altar set up; and the following day, June 29, that according to the Catholic calendar of St. Peter and St. Paul, the first mass at Dolores was celebrated.

One of the first things to be done was to station a look-out for the San Carlos. That vessel had been expected to arrive as early as the land expedition; but it had not made its appearance.

It was thought that some delay had occurred at Monterey and that it could not be far off. But day after day went by without tidings of it. A month passed and still nothing was seen or heard.

In the meanwhile the soldiers were employed in cutting timber for the presidio; and Moraga made a very minute examination of the entire northern end of the peninsula. He found various springs, small lakes and green patches of ground suitable for pasture.

On the eastern slope of the hill or point, forming the south side of the Golden Gate, he selected a good site for the presidio, being in view of the port and entrance and not far from the point where the fort was to be constructed, and having near it two springs yielding sufficient water for the use of the settlement.

It was there that he resolved to locate it; and at length, having waited a whole month in vain for the San Carlos and thinking it high time to commence the foundation, he determined to go ahead.

Though his orders from Rivera y Moncada only applied to the presidio and not to the mission, he deemed it proper to allow the missionaries to remain and maintain the settlement at Dolores as the nucleus of the future mission.

Accordingly on July 26, leaving six soldiers and two pobladores and all the cattle at Dolores, he with the rest of the soldiers and people proceeded to the chosen site of the presidio and immediately began erecting huts of brush and tules and a chapel, in which the first mass was celebrated on July 28.

On August 18, about three weeks after the start was thus given to the presidio, the San Carlos sailed into the bay and anchored in the port or cove in front of it.

This was the second time the vessel had entered the Golden Gate. Its commander now was Fernando Quiros and its pilots Jose Cañizares and Christoval Revilla.

There had been two chaplains; but Father Santa Maria had gone south with Junípero and only Father Jose Nocedal remained.

It appeared that they had left Monterey soon after the march of the land expedition, but had experienced violent head winds and been driven out to sea and as far south as the parallel of San Diego.

They had managed only with great difficulty to beat up and had run as far north as parallel 42°, from which they had come down along the coast; run in between Point Reyes and the Farallones, and on the night of August 17 anchored in what is now known as Drake’s bay.

The next morning they had sailed without trouble into the port. Upon landing, Quiros, the two pilots and Nocedal proceeded to Moraga’s camp and pronounced the site excellently chosen.

With their assistance a square space of ninety-two varas or two hundred and forty-seven and a half feet on each side was laid out and places designated in it for church, head-quarters, store-house, guard-house, barracks and houses for the pobladores or settlers.

Cañizares drew a plan or map of the whole. The work of building houses immediately commenced; two carpenters and a company of sailors from the ship assisted at the labor; and in a short time a store-house for the provisions, a house for the comandante and a chapel, all made of palisades of wood plastered with mud and thatched with tules, were constructed and also many of the houses for the soldiers and families.

As soon as the work at the presidio was well under way, Quiros, Father Nocedal, one of the pilots, the surgeon of the ship and six sailors went over to the site of the proposed mission on the Laguna de los Dolores, which they also pronounced well chosen, and assisted in building a church or chapel and a house for the missionaries.

These, like those at the presidio, were of palisades plastered with mud and thatched with tules.

By the middle of September all were finished — the provisions and supplies from the ships housed and the soldiers and pobladores furnished with habitations.

There still remained to be performed the formal celebration of the foundation of the presidio.

The day chosen for the ceremonies was September 17, 1776, the day known in the Catholic calendar as that of the Impression of the wounds of St. Francis, the patron of the establishment.

On that day all the people congregated, as well those from Dolores and the crews from the ships as those belonging to the presidio.

There was also present Father Tomas de la Peña Saravia, who had been named as missionary for Santa Clara and had come up from Monterey to urge forward the foundation of that mission.

Everything being ready, the royal standard was hoisted in front of the buildings that had been put up; and formal possession of the place and region around about was taken in the name of Charles III., king of Spain.

At the same time the cross was elevated and mass performed by Father Palou assisted by his brother missionaries; and at the conclusion of the ceremonies the Te Deum was sung, accompanied, as was usual whenever practicable on such occasions, with ringing of bells, salvos of artillery and fusillades from land and sea.

A collation, the best the circumstances afforded, was then spread for the entertainment of the company by Comandante Moraga; and the day closed with a feast, if not of luxuries, of food seasoned with greater joys than any luxuries alone could have produced.

The California Diamond Jubilee Commemorative Silver Half Dollar Coin shows with an artist’s portrayal of the early days of the presidio. 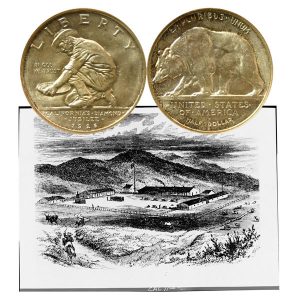