From the History of the Liverpool Privateers and Letters of Marque by Gomer Williams, published in 1897:

At two p.m., on the 10th of July, 1799, the ship Planter, of 12 nine-pounders, 6 six-pounders, and 43 men, Captain John Watts, on her passage from Virginia to Liverpool, espied a lofty ship to the southward in chase of them.

Captain Watts, in a letter dated off Dover, July 15th, gives the following account of the subsequent proceedings: —

“By her appearance we were fully convinced she was an enemy, and being likewise certain we could not outsail her, at four p.m. had all ready for action, down all small sails, up courses, spread boarding nettings, etc.

“At half-past five p.m., we backed our main top-sail, and laid by for her, all hands giving her three cheers.

“She then bore down under our starboard quarter, fired one gun into us, and showed National colors.

“We found her to be a privateer of 22 guns, twelves, nines, and sixes, with small arms in the tops, and full of men.

“We immediately rounded to, and gave her a broadside, which commenced the action on both sides.

“The first broadside we received cut away all our halyards, top-sheets, and braces, and killed three men on the quarter-deck.

“We kept up a constant fire for two glasses and-a-half, when she sheered off to repair damages; and in about one glass returned to board us, with his Bloody Flag hoisted.

“We were all in readiness to receive him, got our broadsides to bear upon him, and poured in our langrage and grape shot with great success.

“A heavy fire kept up on both sides for three glasses this second time.

“In all, the engagement continued firing for five glasses. At last he found we would not give out, and night coming on, sheered off and stood to the south-west.

“His loss, no doubt, was considerable, as the last two glasses we were so nigh each other that our fire must have done great execution.

“My ship’s company acted with a degree of courage which does credit to the Flag.

“I cannot help mentioning the good conduct of my passengers during the action: Mr. M’Kennon and Mr. Hodgson, with small arms, stood to their quarters with a degree of noble spirit; my two lady passengers, Mrs. Macdowall and Miss Mary Harley, kept conveying the cartridges from the magazine to the deck, and were very attentive to the wounded, both during and after the action, in dressing their wounds and administering every comfort the ship could afford; in which we were not deficient for a merchant ship.

“When he sheered off, saw him heaving dead bodies over board in abundance.

“Our ship is damaged in the hull; one twelve pound shot under the starboard cat head splintered the sides much; one double-headed shot through the long boat; sails, rigging, spars, prodigiously injured.

“We had four killed, and eight wounded.”

A letter from Whitehaven supplies the following additional particulars: —

“Mrs. Macdowall and Miss Mary Harley, who lately distinguished themselves so much in the gallant defense of the ship Planter, of Liverpool, against an enemy of very superior force, off Dover, are now at Whitehaven.

“These ladies were remarkable, not only for their solicitude and tenderness for the wounded, but also for their contempt of personal danger, serving the seamen with ammunition, and encouraging them by their presence.

“The merchants of that town have accordingly acknowledged their services in the handsomest manner, and have also instituted an enquiry for the parents of one William Aickin, a native of that town, who was killed in the action, after signalizing himself in a most exemplary manner.

“Early in the conflict he received two wounds, one of which almost separated his hand from the arm, notwithstanding which, without any other assistance than the application of some styptic, and a bandage by Mrs. Macdowall and her companion, he returned to his station and continued his exertions in defense of the ship, till he fell in a manner covered with wounds, from a broadside too successfully directed by the adversary.

“He was then carried below, where he expired in a few minutes after requesting Mrs. Macdowall to convey his duty to his parents, and to let them know that ‘he died in a good cause.'”

Little is known about John Watts other than that he was an American merchant captain at the end of the eighteenth century and the beginning of the nineteenth. Probably born about 1778, location unknown but most likely in Virginia, he was captain of the 18-gun, armed merchantman Planter in 1799.

Watts is remembered for an action between Planter and a 22-gun French privateer which took place on 10 July 1799 in the eastern Atlantic during the Quasi-War with France.

During that five-hour engagement, Watts and Planter’s 43-man crew successfully fought off two concerted attacks by the more heavily armed Frenchman and thwarted the privateers’ attempt to take the American ship.

Watts and his crew received a generous reward for their efforts from Lloyd’s Coffee House in London, the forerunner of the world-famous insurance company Lloyd’s of London.

Watts presumably continued in merchant service after the adventure with the French privateer, but he never served in the United States Navy. John Watts died in 1823, again location unknown.

The American Eagle Gold $50 Coin shows with an image (circa 1955) of the USS Watts, named for the Planter’s Captain Watts, a Fletcher class destroyer launched December 1943. 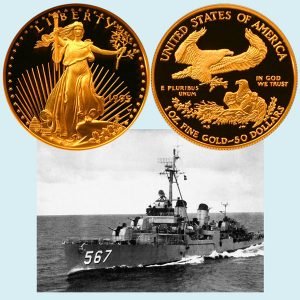