Today, the Jamestown Commemorative Silver Dollar Coin remembers when the famished colonists abandoning their small settlement turned around after meeting the long boat of their Governor on June 8, 1610.

From the January 1883 Magazine of American History, an excerpt of their article Sir Thomas West, Third Lord De la Warr:

April 1, 1610, Lord De la Warr left Cowes in his own good ship, the De la Warr, and with two other vessels, the Blessing and the Hercules, sailed for Virginia, carrying under his absolute command one hundred and fifty colonists and a full supply of provisions for four hundred men for twelve months, to the relief of the colony.

But the colony, although reinforced by those who had been shipwrecked on the Bermudas, for reasons over which they had no control, could not exist any longer, and, June 7, 1610, it was determined to abandon the country.

Accordingly “that night they fell down with the tide to Hogg Island, and the next morning the tide brought them to Mulberry Island, where they met the long boat of Lord De la Warr, in which he had sent Captain Edward Brewster with letters to Sir Thomas Gates, instructing him to return to James town.”

Gates, “the very next daye, to the great griefe of all his company (only except Captain John Martin) as winde and weather gave leave retorned his whole company with charge to take possession againe of those poore ruinated habitations at Jamestown, which we had formerly abandoned; himselfe in a boate proceeded downeward to meete his Lordship, who making all speede up, arrived shortly after at James Towne,” reaching there on the 10th of June.

“Being Sonday, and in the afternoon went ashoare,” where “he first fell on his knees and remained for some time in silent prayer; he then repaired to the church where he first heard a sermon made by Mr. Buck, Sir Thomas Gates, his preacher; after the services he caused his commission to be read, upon which Sir Thomas Gates delivered up to him his owne commission, both patents and the Counsell seale.”

The Governor then delivered “some few wordes ” of reproach, warning, advice and good cheer.

“We have no way to judge the future save by the past,” and there was nothing in the past experience of the colony to give hope for the future.

The colony had been abandoned, the enterprise had proved a failure; “none had enjoyed one day of happiness;” none of the old colony (only except Captain John Martin) wished to return.

There was “found scarcely the print of twenty hundred groats disbursed, which had truly cost the adventurers above twenty thousand pounds;” over seven hundred colonists had been sent out, and in three years over five hundred of these had died, “with cruel diseases and swellings, Mixes, burning fevers, and by warres, and some departed suddenly; but for the most part they died of mere famine;” some had left the colony and others had been sent to England “to answer some misdemeanors.”

Jamestown was “ruinated,” it was perfumed by the odor from the dead bodies of the English, and “surrounded by the watching, subtile, and offended Indian.”

As Lord De la Warr wrote to Salisbury, “if it had not have been for the most happy news of Sir Thomas Gates, his arrival, it would have been sufficient to break my heart.”

For years the expeditions went to Virginia via the tropics, the emigrants being crowded together in the “hot holes” of the small vessels of the period; when the voyage was made in warm weather the calenture was bred among them.

De la Warr reached Virginia in the summer; his people were suffering with the calenture, and in a few months many died.

It is apparent that the Governor deserves far more credit for determining, under such discouraging circumstances, to persevere in his undertaking to plant a colony in America, than he would have done if there had been no previous effort.

With nothing but failure and misfortune to look back on, with disaster and disease around him, kneeling down on the bank of the river, in silent prayer, he found his only solace from on high; he placed his only hope on the strong arm of the Almighty, and went most resolutely to work to plant his colony.

“Can there be a better beginning than from God, whose wisdome is not questioned and whose footsteps in all succeeding ages have been followed?”

Under Lord De la Warr’s guidance, the prospect at once brightened. On June 15th, Sir George Sommers, writing to Salisbury from Jamestown, says: “They are now in good hope to plant and abide there, for greater care than ever is taken.”

On June 12th, the Governor organized his government; on the 19th, Sir George Sommers and Captain Argall were sent to the Bermudas, from thence they “would fetch six months’ provisions of flesh and fish, and some live hoggs.”

During this voyage, Argall entered the present Delaware Bay and named a cape for the Governor.

On the 7th of July, 1610, the Governor and his Council in Virginia wrote a letter to the Company in London, giving a relation of recent accidents, a brief description of the country, and stating the various items of men, provisions, physic, etc., thought necessary for the present welfare of the colony.

Sir Thomas Gates and Captain Newport, being sent in the Blessing and the Hercules for these necessaries, carried this and other letters from Lord De la Warr to England, where they arrived about September, 1610, and found Virginia everywhere evil spoken of, some of those who left Virginia in the Swallow about the first of 1610, having reached England and given sad accounts of the condition in which they left the colony.

The abandonment of the undertaking was seriously debated by the Company; and was only given up after earnest deliberations over the letters from Lord De la Warr, and consultations with Sir Thomas Gates.

The damaging accounts had then to be met, and November 8, 1610, Sir Thomas Smith, Sir Maurice Berkeley, Sir George Coffin, and the celebrated lawyer, Richard Martin, entered a book at Stationers’ Hall, praising the soil and climate of Virginia, confronting the scandalous reports by referring to the letters from the Governor and to Sir Thomas Gates in person.

This publication is styled “A True Declaration of the Estate of the Colonie in Virginia,” &c.

Referring to Lord De la Warr it says: “Shall their venemous tongues blast the reputation of an ancient and worthy Peere, who, upon the ocular certainty of future blessings, hath protested in his letters that he will sacrifice himselfe for his countrie in this service, if he may be seconded; and if the Company doe give it over he will yet lay all his fortunes upon the prosecution of the Plantation.”

“R. Rich, gent, one of the voyage,” who possibly returned with Gates, wrote an account of the colony in verse, published at London in 1610, in which, referring to Lord De la Warr, he says:

“And to the Adventurers thus he writes,
Be not dismayed at all,
For scandall cannot doe us wrong,
God will not let us fall.
Let England know our Willingnesse,
For that our work is good,
Wee hope to plant a nation,
Where none before hath stood.”

As soon as the Company determined not to give up the enterprise, they went to work to supply the items called for by De la Warr.

The Hercules was returned the latter part of 1610.

The next supplies were sent in three vessels in charge of Sir Thomas Dale and Captain Newport, who went down the Thames the latter part of February, and left Land’s End, March 17, 1610-11.

In order to enable Gates to follow “in Maie next,” His Majestie’s Council for Virginia, February 28, 1610-11, issued a circular letter asking assistance.

In this letter they say: “The eyes of all Europe are looking upon our endeavors to spread the Gospell among the Heathen People of Virginia, to Plant our English nation there and to settle at in those Parts.”

Governor De la Warr, while in Virginia, “reduced chaos to order,” brought about the harmony necessary to success; organized a regular system of labor; built Forts Henry and Charles near Southampton River, and another fort near The Falles; repaired and remodelled the church at Jamestown, which he caused to be kept “passing sweet and trimmed with divers flowers” — never failing for a day to implore the favor of God, to look principally to religion, and to practise it themselves,” following, possibly for the first time in the Colony, the “Advice for the Colony on Landing”:

“Lastly and chiefly, the way to prosper and achieve good success is to make yourselves all of one mind for the good of your country and your owne — and to serve and fear God the Giver of all Goodness, for every plantation which our Heavenly Father hath not planted shall be rooted out.” 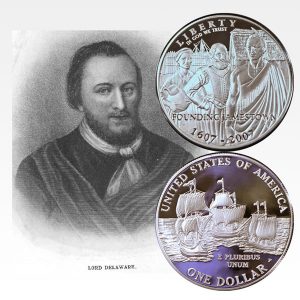