First, some of the early life from the book, Edgar Allan Poe, by John Alexander Joyce published in 1901:

What to do with a young man of twenty years of age was a puzzle to his adopted father, but after several months of cogitation it was determined to send him to the Military Academy at West Point.

In the meantime Mr. Allan had published for private distribution a small volume of juvenile poems, composed at various times by his talented son, and many of them have been pronounced very good, considering that some were written when Poe was only thirteen years of age.

If ever a boy had good endorsers for West Point, Poe had, for his recommendations were signed by Chief Justice Marshall, General Scott, and John Randolph.

Putting a race horse to the plough, a watch maker to the blacksmith trade, or an oculist to the butcher business, was about as reasonable as to send a boy of ethereal imagination to a strictly mathematical school, where scholars are taught and drilled into the rudiments of killing their fellow man according to national vengeance or law! — official murder, the officer’s future trade and ambition.

Poe was admitted into the Academy on the 1st of July, 1830, and was dismissed from the same institution on the 6th of March, 1831, having been convicted by court martial of disobedience of orders and neglect of duty.

He lasted but one session, being pronounced by the other boys on his entrance as a “January colt,” one that kicked in the traces and didn’t give a “continental” whether school kept or not.

While at West Point he was continually writing satirical verses, lampooning those that came under the scope of his displeasure, and was a “toast” with the “boys,” who flattered his poetical genius.

He hits off his Inspecting Officer as follows:

After the dismissal of Poe from West Point he drifted back to New York, where a publisher named Bliss issued his third volume of poetry, which had been subscribed for by many of the military cadets.

It sold very well to the public, and such men as Bryant, Longfellow, Whittier, Willis, Griswold, Goodrich, Morris, and Washington Irving saw that a new poetic meteor had appeared in the sky of letters.

At the General Court-Martial, of which Lieutenant Thomas J. Leslie, of the Corps of Engineers, is President, convened at West Point, New York, on the 5th ult., in virtue of Military Academy Order No. 46 dated the 31st December 1830, was arraigned and tried. . . .

The Court next proceeded to the trial of Cadet E. A. Poe of the U. S. Military Academy on the following charges and specifications: —

Specification 1st. — In this, that he, the said Cadet Poe, after having been directed by the officer of the day to attend church on the 23rd January 1831, did fail to obey such order; this at West Point, New York.

Specification 2nd. — In this, that he, the said Cadet Poe, did fail to attend the Academy on the 25th January 1 831, after having been directed so to do by the officer of the day; this at West Point, New York.

The Court, after mature deliberation on the testimony adduced, find the prisoner “Guilty” of the 1st specification, 1st charge, and confirm his plea to the remainder of the charges and specifications, and adjudged that he, Cadet E. A. Poe, be dismissed the service of the United States. . . .

Cadet Edgar A. Poe will be dismissed the service of the United States, and cease to be considered a member of the Military Academy after the 6th March, 1831. 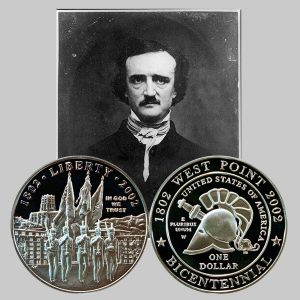