Today, the Illinois Centennial Commemorative Silver Half Dollar Coin remembers the signing of the first state constitution at Kaskaskia on August 26, 1818.

Statehood was granted and Illinois joined the Union in December.

The next year, the First General Assembly recognized the need for a state seal to replace the territorial seal.

From the History of the Flag of the United States of America, And of the Naval and Yacht-club Signals, Seals, and Arms, and Principal National Songs of the United States, with a Chronicle of the Symbols, Standards, Banners, and Flags of Ancient and Modern Nations by George Henry Preble, published in 1882:

Illinois has never adopted a State flag, but makes use of the national colors on all occasions.

The devices upon the regimental colors of the State militia have varied with the taste of their donors, or are at the caprice of the regimental officers.

During the civil war, many of the regiments carried, besides the national ensign, a regimental color, generally presented to them; but two of these have the State arms, the others have various designs, viz.:

Sometimes a national flag was presented, inscribed with the names of the battles in which the regiment had been engaged.

It is named for its principal river, and the name is said to signify the ‘river of men.’

There is no legal description of the State seal of Illinois.

In 1819, the Secretary of State was ordered to procure one, but the law prescribed no design.

The seal in use is two inches in diameter, and bears around its circumference the legend, “Seal of the State of Illinois, * Aug. 26th 1818. * ”

In the center, an American spread eagle perched on an American shield; back of the shield and helping to support it, an olive branch.

In its beak a scroll, containing the motto, “State Sovereignty — National Union.”

The dates 1868-1818 appear on a rock to the left of the eagle, and a rising sun gilds the background on the left.

The State arms are, by law, an eagle sitting on a boulder in a prairie. A rising sun in the background. Motto, in a scroll from the beak of the eagle, “State Sovereignty — National Union.”

When the State was first organized, the Governor’s private seal was used.

In 1867, the ‘Chicago Tribune’ said: “It is proposed to ‘renew’ the State seal of Illinois, from which we infer that the present die is worn out, and that a new one must be procured.

“The motto upon the seal is ‘State Sovereignty — National Union.’

“It appears to us that this is a favorable time for changing the motto, and adapting it to existing facts.

“There is no such thing as ‘State sovereignty ‘ in this country.

“Illinois has sent more than two hundred thousand soldiers into the field within five years to overthrow and expunge the very idea of State sovereignty.

“Sovereignty implies the power to do everything that a government may do, — the power to coin money, to conclude treaties, to make war and peace, and to secede from the Union.

“The Rebellion was instituted upon the theory of State sovereignty. It was crushed by the opposite theory. Let the ‘lost cause’ cease to be emblazoned upon the State seal of Illinois.”

Though the Secretary of State attempted to change the motto in the 1860s, the General Assembly chose to retain their historical symbols.

He did, however, turn the banner in the eagle’s beak such that “National Union” became more prominent and “Sovereignty” was written upside down.

In 1915, Illinois did adopt a state flag with the symbols of the state’s seal on a white background.

In 1970, the state added “Illinois” below the emblem on the flag at the request of a Vietnam veteran who commented that people did not recognize the state’s emblem alone.

The Illinois Centennial Commemorative Silver Half Dollar Coin shows with the historical seals of the territory and state of Illinois, seal images courtesy of Illinois.gov. 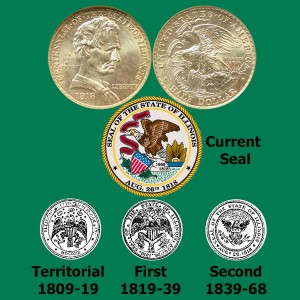