Today, the World War II Commemorative Silver Dollar Coin helps us remember and honor the many men and women who gallantly fought and died for our country and our way of life through the years.

In times of hardship, which wartime certainly is, the human spirit finds ways to lighten the burdens.

From the Deseret News of Salt Lake City, Utah, this article printed on May 25, 1944 described one example of how the military, so far from home, produced a “normal” activity during wartime.

Kudos to their ingenuity in finding a respite from the war and helping them remember what life had been like back in the states.

This island’s first formal dinner-dance was held here recently with bracelets made of scrap airplane aluminum for favors.

Foot powder was sprinkled on the concrete floor for dancing.

Honors went to members of Soncool unit who, inviting a delegation of recently arrived navy nurses, proceeded to do it up in the best Emily Post tradition.

While veterans of South Sea jungle fighting gawked in amazement, the Seabees borrowed an army orchestra, decked out a recreation hut, and set to work on a menu such as men scarcely dream about in this land of K rations and stew.

The Seabee galley staff worked for a couple of days on the preparations. Native flowers were used for table decorations. Napkins were cut from navy dress white ducks, and table-cloths were borrowed from a navy ship.

Name cards and printed and die-cut menus were at each place. The nurses were seated according to the best etiquette, with a gentleman on either side.

Since the dance occurred after the liberation of Guadacanal, perhaps all the attendees made it back home after the war. But, maybe some were deployed elsewhere and didn’t get to see their homeland again.

Regardless, we remember their sacrifices with sadness and a heavy heart.

We smile and give thanks that they found ways to lighten their loads for a brief time.

The World War II Commemorative Silver Dollar Coin shows against an image of supplies arriving on Guadacanal in 1940. 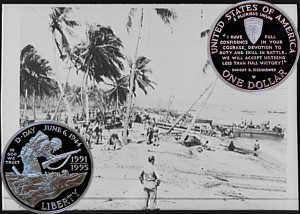