Today, the reverse of the Chief Justice John Marshall Commemorative Silver Dollar coin tells the story of Myra Clark Gaines and her lifelong legal battle for her inheritance.

The New Bedford Mercury newspaper included an article on January 21, 1848 that began:

“The Great Gaines Case—This stupendous claim involving an amount of about $17,000,000, was decided in the Supreme Court of the U.S. on the 13th inst., in favor of Mrs. Gains. The suit is one of the most important and interesting ever before the American Courts, and has been in litigation about fourteen years…”

However, her struggles for her inheritance did not end with the Supreme Court’s award in 1848.

Shortly after her death in 1885, Arthur’s Illustrated Home Magazine of April 1885 provided a synopsis of her legal war up to her passing:

MRS. GAINES’S recent death closes a most romantic chapter in the legal history of the United States. Her wonderful life-story, stranger than fiction, has made her one of the most interesting characters of the age. Briefly told, the story is as follows:

Myra Clark Gaines was the daughter of Daniel Clark, a wealthy Irish gentleman who had settled in New Orleans and married a beautiful Creole, generally known as Madame Zulieme. Previous to her marriage with Clark, Zulieme had been the wife of a French refugee of high birth and fortune, named De Grange; but, upon her discovering that the latter was already married, she left him, and soon after married her second husband.

To prove that Zulieme’s first marriage was not legal and that her second was, consequently that Zulieme’s daughter was the legitimate heiress to Daniel Clark’s vast estate, was one of the chief difficulties at the outset of Mrs. Gaines’s famous law suits.

Clark, it appears, kept his young wife in seclusion, and, soon tiring of her, left her in a country-house near New Orleans while he went to Washington, where he became a social lion, passing off for a brilliant bachelor.

Later, his chief ambition was to make money, and his large possessions in and about New Orleans increased in value constantly. Sad to relate, he never openly acknowledged his wife, and she, for her part, never sought to force herself upon him. Finally she drifted out of his sight, dying in Philadelphia many years later — not, however, until she had been able to testify in behalf of her child.

This one daughter, Myra, born soon after Clark had deserted his wife, strongly appealed to whatever sense of duty he possessed. Before his death, he made a will leaving to her the bulk of his property and appointing a guardian for her, thus partially atoning for the wrong he had done her mother.

But, however good Clark’s intentions may have been, the sequel proved that he was unfortunate in his choice of this guardian. The latter, as soon as he had gained possession of the heiress and her fortune, determined to keep that heiress in ignorance of her parentage and appropriate the fortune for himself. Thus Myra grew to womanhood the victim of further wrongs.

But, in time, the young girl met and became engaged to William Whitney, son of General Whitney, the founder of the city of Binghamton. The idea of Myra’s marriage was particularly obnoxious to her guardian — it would interfere with his plans in more ways than one.

His unreasonable opposition was finally overcome — but he improved the occasion by seeking to blight his ward’s whole future. Calling Myra into his study upon the eve of her wedding-day, he informed her that she was the daughter of Daniel Clark, showed her some papers, which he told her was the only proofs of her parentage, and then threw them into the fire before her face.

But Myra’s resolution was speedily taken with her husband to help her, she set out to prove, first, the legal marriage of Clark and Zulieme, and next, to recover the enormous fortune which her unscrupulous guardian had managed to complicate, seemingly beyond her reach.

The story of these lawsuits, beginning in 1826 and ending in 1883, form part of the civil history of America ; but the chain of romantic, improbable, pathetic incidents woven through them sounds far more like fiction than fact.

It was an exceedingly difficult quest upon which with his allies, opposed her every step of the way — that it is no wonder that she spent a lifetime, and perhaps lost nearly as much as she gained in the pursuit.

But nothing daunted her. She was brilliant, beautiful, and fascinating to the last, with a singular power of impressing all who saw and heard her with the justice of her claims.

While still young, Myra was left a widow, and married, for her second husband, General E. P. Gaines, the hero of Fort Erie. General Gaines aided her, as Mr. Whitney had done, in carrying on her legal warfare.

But he, too, exhausted his fortune in the effort. It is gratifying to know that Mrs. Gaines’s battle of fifty-seven years’ duration was at last successful — that she lived to see that her life had not been altogether thrown away.

All her claims had finally come into possession of the city of New Or leans; in May, 1883, that city was declared to be her debtor to the amount of two million dollars, with five per cent, interest till paid, and all costs.

What these last will be no one, as yet, can estimate. Hundreds of thousands of dollars have changed hands during the progress of these law suits, and it is said that over two thousand lawyers have been engaged in it, many of whom have made fortunes out of the case.

After a short illness, Mrs. Gaines died, January 9th, 1885, at her residence in New Orleans. With her, at the time of her death, was her son-in-law, James T. Christmas. She has had five children, none of whom are now living, but she had gathered around her a family of six young grandchildren, who are, we believe, amply provided for.

Amazingly, this article was premature. Even death did not end the court battles.

After New Orleans finally paid her heirs and creditors took ~$860,000 for debts and legal expenses, the family received only a small amount.

The reverse of the Chief Justice John Marshall Commemorative Silver Dollar Coin with its design of the Supreme Court shows against a background of Myra Clark Gaines circa 1855. 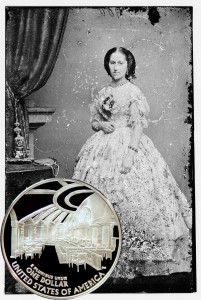