But, in this case, we’re talking about the five cent piece not the five dollar currency.

Based on news reports from the 1880s-1890s, counterfeiters targeted coins that they could easily, relatively easily, pass for the real thing.

Let’s look at examples. First, there’s the Shield nickel minted from 1866 to 1883. This Shield nickel happens to be a “no rays” version from 1872. On the obverse, notice the rather ornate shield containing thirteen stripes from which the coin gets its name. 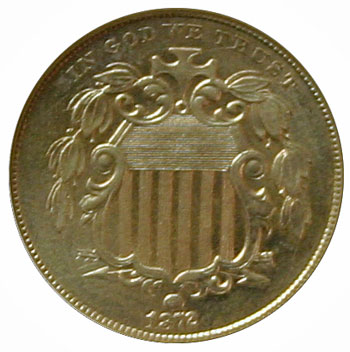 For the reverse, earlier versions of the Shield nickel (1866 & 1867) included rays between the thirteen stars that appeared to radiate from the “5” outward. In 1867 the Mint removed the rays to yield the variety shown below on the 1872 nickel. 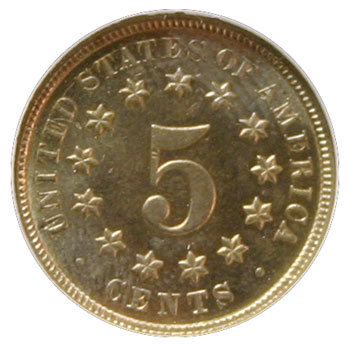 Due to public complaint of people not knowing the new coin was for five cents, Charles Barber had to make another version to include “cents” below the Roman numeral “V.” (It seems some enterprising, nefarious souls coated the new five cent coins in gold and passed them as $5 coins.) This version was early in the life of the new coin and does not have the “cents” on the reverse.

In those days – the 1880s and 1890s, the larger cities, especially in the east, had trolleys for ease of movement around the cities. These street cars with their five cent fares became targets for the counterfeiters.

In some cases the street car driver would accept the fares from the riders, and in other cases the trolleys included conductors/brake men who would take the fare from the commuters.

On occasion, these street car drivers and trolley conductors found some of their patrons gaining passage with counterfeit five cent coins.

One rather ingenous young lad hopped on a street car during the busy time of the day and paid his fare to the driver. Then, being an outgoing and helpful fellow, he took the fares of other patrons and deposited them in the fare box. In cases where the customer did not have the exact five cent fare, this lad would obtain the correct change from the driver to hand to the customer.

Though the driver took advantage of the lad’s helpfulness, he was also very observant as this was his livelihood. He noticed the lad did not hand the change directly back to the customer. Instead, the lad took his own change to give to the customer.

When the driver found an opportunity, he called over a policeman to have a chat with the lad to see what he was doing. Even after riding and making change for a time, it turned out the young man still had 35 counterfeit nickels in his pockets that he had not been able to exchange for real nickels yet.

This little five cent counterfeit operation ended abruptly with an arrest and a default bail of $1000 (a lot of money in 1881). The story ran in the New York Times on April 9, 1881. You can read it here:  Circulating Counterfeit Money.

The next story included another five cent ride with the conductor receiving a counterfeit nickel for a fare. At this point (1890), the conductors were more vigilant to the possibility of counterfeiting. Even so, they were still bamboozled every so often.

Upon receiving a bad nickel coin, this conductor commented to his passengers, “That’s what I call mean. A man who would make a bogus nickel would put salt in ice cream.”

He went on to share with his riders that though they did still receive counterfeit nickels, they were more likely to receive a counterfeit larger denomination coin.

He told of one busy evening at dusk, a large, heavily bearded man boarded the trolley and offered a half dollar coin for the fare. In the low light with many customers vying for his attention, the conductor accepted the coin and provided the $0.45 in change.

Later when he was finished for the day, the conductor counted his money from his customers only to find one of the half dollars was a counterfeit. Two other conductors ended their day at roughly the same time and also found a counterfeit half dollar coin in their money.

They began comparing notes and asking other conductors about their money. They determined the big man with the heavy beard passed at least twelve counterfeit half dollars to different conductors by riding the trolleys that evening. For his twelve fake coins, he received $5.40 in real money as change. Unlike the young lad in the earlier story, the big, bearded man got away with his counterfeit scheme that evening.

In another story from the day, Without the Right Ring, the newspaper provided details of the various counterfeiting schemes in the mid-1880s from Mr. Dickerman from the United States Treasury Counterfeit Detector office. With the descriptions, Mr. Dickerman provided insights to help educate their readers. For the minor coins – the five, three, two and one cent pieces, he explained that all of them had been counterfeited except the two cent.

Just think about the time, effort and expense for the counterfeit nickels. They had to obtain the metals (at least similar to the coinage metals of the day), make the blanks, recreate the design close enough to trick most people’s eye, and make the coins. All of this effort would be accomplished using tools that we would consider almost rudimentary today.

What if they had only applied their skills to an honest trade?