Newspapers around the country reported on the geyser’s new eruptions a few days later.

Washington City, July 21—The Secretary of the Interior today received a telegram from Captain Boutell, superintendent of the Yellowstone National Park, stating that the Great Excelsior geyser has been in a state of eruption since last Saturday [July 19, 1890], the first time in two years. A column of hot water rises from the crater into the air to a distance of 300 feet.

The Practical Guide to Yellowstone National Park, Containing Illustrations, Maps, Distances, Altitudes, and Geyser Time Tables compiled by A. B. Guptill and printed in 1890 provided information about the Excelsior geyer:

Excelsior Geyser. — “Early explorers in this locality discovered, in 1871,” says Dr. Peale, “on the west bank of Firehole River, an immense pit of rather irregular outline, 330 feet in length by 200 feet in width at the widest part.

“The water is of a deep blue tint, and is intensely agitated all the time, dense clouds of steam constantly ascending from it.

“It is only when the breeze wafts this aside that the surface of the water, which is 15 or 20 feet below the level surrounding, can be seen.

“The walls on three sides are perpendicular, cliff-like, and in places overhang, having been worn away on the other.”

Cliff Caldron, with every indication of a powerful geyser with long intervals of eruption, was, however, not known to be a geyser until some ten years later.

Visited by thousands annually, this interesting section became known as “Hell’s Half Acre,” a name it retained till 1881, when discovered by Col. P. W. Norris to be a geyser of great force, and named by him “Excelsior.”

Its eruptions in 1881 began in the fall, after the tourist season had closed, and before the season of 1882 opened had wrought a great change in the appearance of its crater.

Col. Norris witnessed upward of thirty eruptions, varying from 75 to 250 feet in height, at intervals of one to four hours.

No further eruptions of this geyser are recorded until early in the spring of 1888, when reports became current that Excelsior was again in action, and many residents of the surrounding territory were attracted to the Park when the only means of travel was upon snowshoes.

Eruptions of great force continued during the entire season of 1888, and kept up with unabated vigor during the succeeding winter.

The present size of the crater is some 250 feet in width by 400 feet in length, having enlarged quite a good deal during the past two years.

This process of enlargement, if kept up, will, in time, undermine Turquoise Spring, and, eventually, Prismatic Lake also; the latter fully 500 feet distant from the geyser crater.

The intervals of eruption during 1888 were at first about every hour and fifteen minutes, increasing toward the latter part of the season to two hours.

The only possible indication of an approaching display is the increase in the volume of overflow, there being a steady filling of the crater after periods of activity.

Immediately preceding an eruption a violent upheaval occurs, raising the entire volume of water in the crater nearly 50 feet, when instantly one or two, and sometimes three, terrific explosions occur, followed closely by the shooting upward of columns of water, and oftentimes masses of the rocky formation, to a height of 200 to 250 feet.

Tons of rock have in this way been hurled into Firehole River, some pieces fully 500 feet from the crater, while specimens may be seen scattered all about the vicinity.

The wearing away of the formation at the outlet of the “overflow” has plainly exposed to view the hoof-prints of buffalo, undoubtedly made centuries ago.

The inactivity, during 1888, of two of the largest geysers in the Upper Basin is attributed to the wonderful activity of Excelsior, which, at each eruption, ejects as much water as all the geysers in this basin combined.

The afternoon displays are considered the best, owing to the presence of less steam than earlier in the day, and from the main road fully as satisfactory a view is obtained.

Currently on its web site for Yellowstone, the National Park Service describes the Midway Geyser Basin:

“This geyser basin, though small in size compared to its companions along the Firehole River, holds large wonders for the visitor.

“Excelsior Geyser reveals a gaping crater 200 x 300 feet with a constant discharge of more than 4,000 gallons of water per minute into the Firehole River.

“Also in this surprising basin is Yellowstone’s largest hot springs, Grand Prismatic Spring. This feature is 370 feet in diameter and more than 121 feet in depth.”

The Yellowstone Commemorative Silver Dollar Coin shows with an image of the Excelsior geyser and the Firehole river, circa 1890. 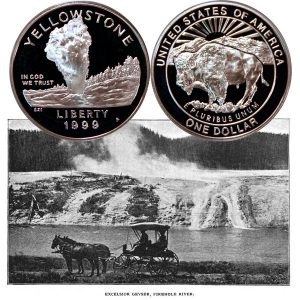