Today, the Webster Hard Times Token remembers a story reported in the newspaper of 200 years ago.

On board of Decatur’s ship was a little boy of about 9 years old. He was not considered one of the regular crew; but he shared the mess of a generous sailor, who had, two years before, taken him from his widowed mother.

The spirit of his father, who had also been a seaman, had long since gone aloft, and left his wife and little ones on the shoals of poverty.

When the Macedonian hove in sight, and all hands were clearing ship for action, the little fellow stepped up to Commodore Decatur.

“And it please you, Captain, (said he,) I wish my name might be put down on the roll.”

“And what for, my lad?” enquired the Commodore.

“So that I can draw a share of the prize money, sir,” answered he.

Pleased with the spirit and confident courage of the little hero, his name was ordered on the list; but the moment was too important to say more.

After the prize was taken, Decatur thought of the little sailor boy, and called him up.

“Well, Bill,” said he, “we have taken here, and your share of the prize if we get her safe in, may be about two hundred dollars; what will you do with it?”

“I’ll send one half to my mother, sir, and the other half shall send me to school.”

“That’s noble,” cried the Commodore, and delighted with the spirit of the lad, took him under his immediate protection, and obtained for him the birth of a midshipman.

Every attention has been paid to his education, and he gives great promise of making an accomplished officer.

Commodore Decatur was Stephen Decatur, the son of a US Naval officer of the Revolutionary War. He followed in his father’s footsteps after his own schooling and became the youngest man to reach the rank of Captain.

He joined the US Navy in 1798 and served under three presidents.

During his service, his many acts of heroism and exceptional performance distinguished his career and made him a national hero during his lifetime.

Unfortunately, his career and life came to an abrupt end when he lost a duel with a rival officer.

As a hero, he has been remembered through his name being used on ships, counties, cities, streets. In addition, his likeness has appeared on currency and stamps.

The Webster Hard Times token with its image of the USS Constitution, one of the ships he commanded, shows against a portrait of Stephen Decatur, American hero. 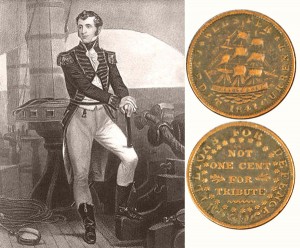