Today, the Long Island Commemorative Silver Half Dollar Coin remembers when the army resources retreated from Long Island on August 30, 1776.

Various letters discussing the situation in August 1776 excerpted from the History of Long Island by Benjamin Franklin Thompson, published in 1839:

To the Hon. Convention of the State of New York.

Gentlemen — I am now at Jamaica, with less than 100 men, having brought all the cattle from the westward and southward of the hills, and have sent them off with the troops of horse, with orders to take all the rest eastward of this place, to the eastward of Hempstead Plains, to put them into fields, and to set a guard over them.

The enemy, I am informed, are entrenching southward, and from the heights near Howard’s. I have now received yours, with several resolutions, which I wish it was in my power to put in execution; but, unless Cols. Smith and Remsen, mentioned in yours, join me with their regiments, or some other assistance immediately, I shall not be able; for the people are all moving east, and I cannot get any assistance from them.

I shall continue here as long as I can, in hopes of a reinforcement; but if none comes soon, I shall retreat, and drive the stock before me into the woods.

Cols. Smith and Remsen, I think, cannot join me. Unless you can send me some other assistance, I fear I shall soon be obliged to quit this place. I hope soon to hear from you.

I am, gentlemen, your most humble serv’t.

To The Hon. Convention of New York, at Harlaem.

Gentlemen — Enclosed I send you a letter from Col. Potter, who left me yester day at 11 o’clock, after bringing about 100 men to me at Jamaica. Major Smith, I expect, has all the rest that were to come from Suffolk County.

There have about 40 of the militia joined me from the regiments in Queen’s County, and about 50 of the troop belonging to King’s and Queen’s counties, which is nearly all I expect.

I have got all the cattle southward of the hills in King’s County, to the eastward of the cross-road between the two counties, and have placed guards and sentinels from the north road to the south side of the island, in order to prevent the cattle’s going back, and to prevent the communication of the Tories with the enemy.

I am within about six miles of the enemy’s camp: their light horse have been within about two miles, and, unless I have more men, our stay here will answer no purpose.

We shall soon want to be supplied with provisions, if we tarry here.

To The Hon. Convention of New-York.

Gentlemen — I wrote two letters to you yesterday, one by express and another by Mr. Harper, and also sent my brigade-major to you, to let you know my situation, and I expected an answer to one of them last night; but my express informed me that he was detained till last night for an answer.

I have now received yours of the 26th, which is only a copy of the last, without a single word of answer to my letter, or the message by my brigade-major. I must again let you know my situation.

I have about 70 men and about 20 of the troop, which is all the force I have or can expect, and I am daily growing less in number. The people are so alarmed in Suffolk, that they will not any more of them march; and as to Cols. Smith and Remsen, they cannot join me, for the communication is cut off between us.

I have sent about 1100 cattle to the great fields on the plains yesterday. About 300 more have gone off this morning to the same place, and I have ordered a guard of an officer and seven privates. They can get no water in those fields.

My men and horses are worn out with fatigue. The cattle are not all gone off towards Hempstead. I ordered them off yesterday; but they were not able to take them along.

I yesterday brought about 300 from Newtown. I think the cattle are in as much danger on the north side as on the south side; and have ordered the inhabitants to remove them, if you cannot send me an immediate reinforcement.

Correspondence between the Convention and General Washington.

To His Excellency Gen. Washington.

Sir — I am commanded by the convention to enclose to your Excellency the copy of a letter they received last evening from General Woodhull.

The convention are of opinion that the enemy may be prevented from getting the stock and grain on Long Island if the regiments under the command of CoL Smith and Col. Remsen be sent to join Gen. Woodhull.

That this junction may effected, and how, Major Lawrence, who is a member of this convention and the bearer hereof, will inform your Excellency.

I have the honor to be, with great respect,

Your Excellency’s most obedient servant, By order,

To The Hon. Abraham Yates.

Sir — I was just now honored with your favor of this date, with General Woodhull’s letter, and should esteem myself happy, were it in my power to afford the assistance required; but the enemy having landed a considerable part of their force here, and at the same time may have reserved some to attack New York, it is the opinion, not only of myself, but of all my general officers I have had an opportunity of consulting with, that the men we have are not more than competent to the defense of those lines, and the several posts which must be defended.

This reason, and this alone, prevents my complying with your request. I shall beg leave to mention, in confidence, that a few days ago, upon the enemy’s first landing here, I wrote to Governor Trumbull, recommending him to throw over a body of 1000 men on the island to annoy the enemy in their rear, if the state of the colony would admit of it.

Whether it will be done I cannot determine. That colony having furnished a large proportion of men, I was, and still am, doubtful whether it could be done.

If it could, I am satisfied it will, from the zeal and readiness they have ever shown to give every possible succor. I am hopeful they will be in a condition to do it; and if they are, those troops, I doubt not, will be ready and willing to give General Woodhull any assistance he may want.

But cannot the militia effect what he wishes to do? They, I believe, must be depended on in the present instance for relief.

I have the honor to be, in great haste,

Sir, your most obedient servant,

Continuation of the correspondence by the Committee of Safety.

To His Excellency Gen. Washington.

Sir — In our way to Fishkill, agreeable to an adjournment of the convention, we are informed that the army on Long Island is removed to the city of New York; and anxiety to know the fact, as well as to be informed whether you think any measures necessary for us to take, induces us to trouble your Excellency at this time for an answer hereto.

We have ordered, last night, all the militia of the counties of Ulster, Dutchess, Orange, and Westchester, to be ready, on a minute’s warning, with five days’ provisions.

We shall wait the return of our messenger at this place,

and are, Sir, your most obed’t and very humble serv’t

To The Hon. Abraham Yates, Esq.

Sir — Your favor of this date is just come to hand. Circumstanced as this army was, in respect to situation, strength, &c. it was the unanimous advice of a council of general officers to give up Long Island, and not, by dividing our force, be unable to resist the enemy in any one point of attack.

This reason, added to some others, particularly the fear of having our communication cut off from the main, of which there seemed no small probability, and the extreme fatigue our troops were laid under in guarding such extensive lines without proper shelter from the weather, induced the above resolution.

It is the most intricate thing in the world, Sir, to know in what manner to conduct one’s self with respect to the militia.

If you do not begin many days before they are wanted to raise them, you cannot have them in time. If you do, they get tired and return, besides being under very little order or government, whilst in the service.

However, if the enemy have a design of serving us at this place, as we apprehend they meant to do on Long Island, it might not be improper to have a body in readiness, to prevent or retard a landing of them east of Harlaem river, if need be.

In haste, and not a little fatigued, I remain,

with great respect and esteem, Sir, your most obedient humble servant,

The Long Island Commemorative Silver Half Dollar Coin shows with an artist’s image of New York as seen from Long Island, circa 1778. 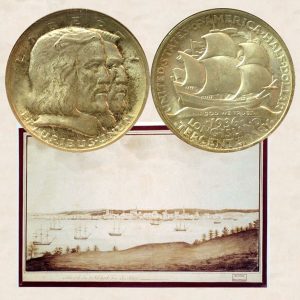