The obverse of the 1987 Constitution and 1993 Bill of Rights Commemorative Silver Dollar Coins remember 227 years ago today.

In their suit coats and britches, probably woolen, the chosen men continued their meeting in Philadelphia to hammer out a governing document for the yet-to-be United States.

On this day, 227 years ago, they discussed and made changes to several Articles and Sections of their work in progress, the Constitution.

In one change, Colonel George Mason and Mr. James Madison, Jr., both from Virginia, moved to add to the oath of the President the phrase “and will to the best of my judgment and power preserve, protect and defend the Constitution of the United States.”

In discussion, Mr. Wilson of Pennsylvania thought the general provision for oaths of office, in a subsequent place, rendered the amendment unnecessary.

However, the change passed in the affirmation with seven “Ayes,” one “No” and three absent.

New Hampshire, Connecticut, Pennsylvania, Maryland, Virginia, South Carolina and Georgia voted for the change while Delaware disagreed. Massachusetts, New Jersey and North Carolina were absent. (New York could not vote since two of their three delegates chose not to participate.)

Before he enter on the Execution of his Office, he shall take the following Oath or Affirmation:—”I do solemnly swear (or affirm) that I will faithfully execute the Office of President of the United States, and will to the best of my Ability, preserve, protect and defend the Constitution of the United States.”

Though very involved throughout the convention, Colonel Mason did not sign the Constitution. He disagreed with several points and left the convention before it ended in September.

Mainly, he fought for individual rights and against the potential of a tyrannical government.

By the time the states began deciding whether to agree to the Constitution, Colonel Mason became one of its biggest opponents.

Even after the required number of states, nine, ratified the Constitution, Mason continued to be vocal about the document’s deficiencies regarding individuals’ rights.

Asked to serve in the first Senate, Mason refused, however he provided advice to all who visited him. Thomas Jefferson noted, “whenever I pass your road I shall do myself the honor of turning into it.”

As a result of Mason and his supporters wanting individual rights, Mr. Madison presented a Bill of Rights during the first Congress with much of the substance coming from documents written by George Mason.

James Madison is known as the “Father of the Bill of Rights” for all the work he did to frame the words and push for their acceptance in Congress.

Perhaps George Mason could be considered the “Grandfather.” 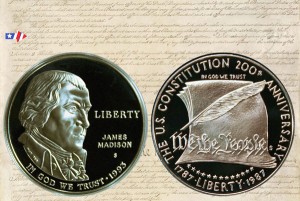