Now, Congress accepts the practice of “stopping the clock” to get business done, but in the early days, one gentleman took exception to the changing of the clock.

Back in 1836, Benjamin Hardin of Kentucky gave a long-winded speech in the House where he objected to his cohorts about time and the span of the days.

First, he reminded his fellow congressmen about how Congress began. Next, he described the time in a day before sharing his displeasure regarding the clock:

“Resolved, That it is the opinion of this convention that, as soon as the conventions of nine States shall have ratified this constitution, the United States in Congress assembled should fix a day on which electors should be appointed by the States which shall have ratified the same, and a day on which the electors should assemble to vote for the President, and the time and place for commencing proceedings under this constitution. That, after such publication, the electors should be appointed, and the Senators and Representatives elected. That the electors should meet on the day fixed for the election of the President, and should transmit their votes, certified, signed, sealed, and directed, as the constitution requires, to the Secretary of the United States in Congress assembled; that the Senators and Representatives should convene at the time and place assigned; that the Senators should appoint a President of the Senate, for the sole purpose of receiving, opening, and counting the votes for President; and that, after he shall be chosen, the Congress, together with the President, should, without delay, proceed to execute this constitution.”

This resolution declared that Congress, when the ratification of nine States took place, should fix on the day when the Government should commence. Congress did designate the day by a resolution, which reads in these words:

By this resolution of Congress, the 4th of March, 1789, was the day fixed on by Congress. On that day, the present Government was to commence under the constitution, and on that day it did commence.

The caption to the acts of the first Congress proves that the Government of the United States commenced on the 4th of March, 1789, which caption reads in these words:

“Acts of the first Congress of the United States, passed at the first session, which was begun and held at the city of New York, in the State of New York, on Wednesday, March 4, 1789, and ended September 29, in the same year.”

The 4th of March, 1789, after being fixed on by Congress, in pursuance of a resolution of the convention, is just as binding as if it were inserted in the constitution itself. It is the execution of a power; and when the execution takes place in strict conformity to the power, it then becomes the act of those giving the power.

What is the time that completes one year? Suppose we begin on new year’s day: the answer is, the last day of the December following, which completes the three hundred and sixty-five days. Every negro that has been hired out on a new year’s day for a year knows the year is out the last day of December following. The week has seven days: suppose we begin with Monday, are not the seven days completed on Sunday? I am elected for two years: if my time commences on the 4th of March, is it not out on the 3d of March two years thereafter? Let us see how the law computes twenty-one years, the age of maturity, for a man or woman. Blackstone’s Commentaries, first Volume, page 463, reads in these words:

“ So that full age in male or female is twenty-one years, which age is completed on the day preceding the anniversary of a person’s birth.”

That the Representative’s term of service commences on the 4th of March every two years, and expires on the 3d of March two years afterwards, is a position so plain that none can gainsay it—no one attempts to dispute it. The whole question comes to this at last: when does the 4th of March commence, and when does the 3d of March, two years afterwards, end? The law makes no fraction of a day; the legal time as universally settled is, that the day begins at midnight, and ends at midnight: in the computation of time, the law knows no night. Suppose a man were under trial for Sabbath breaking, and the proof was he broke the Sabbath on Sunday morning between daybreak and sunrise; would any judge or jury let him off upon ground that it was on Saturday he committed the act? Or suppose it was proven that the person under trial did the deed alleged against him (say, went to ploughing) on Monday morning, ten minutes before sunrise; would any judge dare say that was Sunday, and he was guilty of Sabbath breaking? Our constitution must be construed as any other part of our law would, for it is a part of the law of the land. This mode of computing time has been long regulated by mankind, and it is now too late to dispute it.

The conduct of gentlemen, who contended last session that the computation should be made from sunrise to sunrise, and that Congress could continue its session till sunrise the 4th of March, distrusted their own opinion; and it was only as the last alternative that they were driven to assume that ground.

On the last night of the last session there were a number of bills on the Clerk’s table; each bill had its. friends. About ten o’clock, it was perceived that the bills, or some of them, would be lost for want of time. A clockmaker in this city was procured, and. conveyed behind the clock of this hall; he moved the bands back eighteen minutes. I saw it done, and announced the fact to those who sat near me. Immediately afterwards, when the eyes of fifty gentlemen were on the clock, its hands were moved back one hour more; then, a member from North Carolina proclaimed the fact to the House. I have since been informed that the man who had this done was then a member of Congress, and has since boasted of it; and that he procured it to be done to get a favorite measure he was interested in through the House. Why did he do it? Because he was of opinion that the time would expire at midnight; yet the same man was arrayed with those who afterwards contended that sunrise was the time next morning, and not midnight.

This was just a small portion of the speech entitled, Mr. Hardin of Kentucky on Mr. Adams’s resolutions, concerning the loss of the fortification bill of the last session. 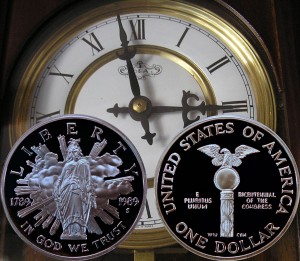