Today, the Bicentennial Half Dollar Coin tells part of the story of the early days of Philadelphia.

Though the Swedes arrived in the area earlier in the 1600s, William Penn organized the town of Philadelphia.

In late August, 1682, William Penn along with 100 settlers sailed from England on the Welcome, a ship of 300 tons with her Captain Robert Greenaway.

In early September, the London Gazette reported, “Deal, Sept. 2. Two days since sailed out of the Downs three ships bound for Pensilvania, on board of which was Mr. Pen, with a great many Quakers who go to settle there.”

Another historical account from England described the general exodus, “It was from the shore of Deal that many of the Pilgrim Fathers embarked for the horrid and dismal regions of America, to become settlers among a wretched, naked and barbarous people. To such an extent had the frenzy become of emigrating thither, that so vast a number, constantly going, around the attention of the Government, who felt constrained to intercept it or else a great part of the nation had soon emptied itself into these American regions. There were no less than from twenty to thirty ships clearing out from the Downs every year, which must have occasioned considerable trade to the people of the town.”

The ship carrying William Penn made good time, but several of the passengers succumbed to small-pox on the two-month journey.

As the ship traveled the open sea, William Penn turned 38 on his birthday on October 14.

Perhaps his birthday was shortly before he wrote of scenting land with the air smelling “as sweet as a garden new blown.”

In late October, the Welcome entered the Delaware River on her way to her destination.

On October 27, 1682, William Penn aboard the Welcome arrived at Philadelphia.

When he came ashore, the people meeting him observed a man “tall in stature and of an athletic make, handsomely, though plainly dressed, courteous in bearing, ready in speech, with a manner signifying energy, courage and confidence of leadership, yet controlled and governed by motives of kindly good will.”

The Bicentennial Half Dollar Coin shows against an early map of Philadelphia including a view of Independence Hall. 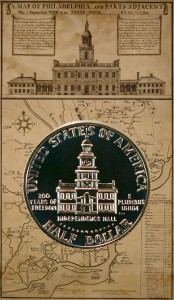