The “details” of the first commercial flight varied among the news reports as seen in the four articles below, but each one noted the historical effort.

From Aeronautics, The American Magazine of Aerial Locomotion, December 1910:

For the first time in aviation history an article of trade has been transported via aeroplane from one city to another.

On November 7, P. O. Parmalee, in his Wright biplane, similar in those made for the general public, carried 10 bolts of silk weighing 70 lbs. from Simms Station, near Dayton, to Columbus, the consignee and backer of the enterprise being the Moorehouse-Martens Co., dry goods merchants of Columbus.

The value of the goods transported was $600.

The Wright Company, acting as the “common carrier,“ applied their established tariff of $74.42 per pound.

The grocer and baker have not as yet taken up the new rapid delivery.

The time to the Driving Park was 66 minutes.

The machine crossed HighStreet at 11.40,the time to that point being 59 minutes for the 58.34 miles.

The balance of the time was employed in maneuvers at the Driving Park.

The center of the track is almost exactly 2.5 miles east of High Street, so the total distance flown was 60.84 miles, as measured by Mr. Williams Welch, of the office of the Chief Signal Officer in Washington.

This speed is the greatest yet made by any American aeroplane.

Similarly, from the Scientific American, December 10, 1910:

The first delivery of express matter by aeroplane that has ever been made was that of 10 bolts (500 yards) of silk, which was carried by Phil O. Parmalee on his Wright biplane from Dayton to Columbus, 0., on November, 7th.

The start was made from the Wright aerodrome at Simms Station, near Dayton, at 10:45 A.M., and the distance of 65 miles to the driving park, some 3 miles beyond Columbus, was covered in 65 minutes.

The aviator was favored with a strong northwest wind, which increased his speed over the ground from 40 miles per hour—the normal speed of the Wright biplane—to about 70 miles per hour at times.

The 200 pounds of silk, which was valued at $731, was quickly delivered to the home store of the Morehouse Company by automobile immediately after its arrival at the driving park, and thus a striking demonstration of the possibilities of the conjunctive use of the aeroplane and the automobile in the delivery of mail and express was accomplished.

The time made was very much less than is required by the ordinary express, as no more direct system of town to town delivery could be devised.

The weight of the aeroplane complete, with silk and aviator, was 1,180 pounds, and during part of the journey Parmalee drove his machine to a height of 2,500 feet.

The local papers of the day had small paragraphs placed near the back of their publications.

From the Youngstown Vindicator on the day after the delivery:

Wright Aviator in a Late Model Covers the Distance, Sixty-two Miles, in Sixty-two Minutes, with 200 Pounds of Silk, Which is Delivered to Firm at Columbus—First Commercial Trip in History.

Columbus, O., Philip O. Parmalee in a No. 10 Wright aeroplane, broke the world’s record for speed in a cross country flight, flying from the Wright aviation field, eight miles northeast of Dayton, to Columbus driving park, carrying with him 200 pounds of freight, covering a distance of sixty-two miles in sixty-two minutes.

The flight goes on record as the first commercial trip ever made by an aeroplane. It was arranged by the Morehouse Martens company and to make it a commercial flight the aviator carried ten bolts of silk, weighing 200 pounds.

Just one hour and two minutes elapsed from the time Parmalee in his aeroplane left the Wright aviation field until he soared over the driving park.

Ten minutes later he landed in the circle inside the grand circuit race track and hundreds of persons who had seen him soar over the city rushed to the scene of landing, adding to the crowd of 1,500 who were there early awaiting the arrival.

A detachment of the national guard in charge of Captain Oyler of Company B, Fourth regiment, Ohio national guard, kept the crowds from getting in danger under the aeroplane.

After Parmalee had eaten lunch he gave an exhibition of maneuvering about the driving park.

From the Toledo Blade, two days after the historic flight:

Columbus. Phillip O. Parmalee in a Wright brothers’ aeroplane, broke the cross country record today in a flight from Dayton to Columbus.

The distance of 65 miles was made in 69 minutes and was attended by no mishap of any kind.

Parmalee complained that his feet and hands were cold, but said the flight was one of the most successful he had ever made.

He started from Dayton at 10.45 and arrived at the driving park in Columbus at 11.54, where a great crowd had assembled to see him make the landing.

This is the first time an aeroplane has been used for commercial purposes. He brought a bolt of silk for the Morehouse Martins Dry Goods Co., and received $500 for his trouble.

The First Flight Commemorative Gold Ten-Dollar Coin shows with an image of Parmalee in his Wright brothers’ aeroplane, 1910. 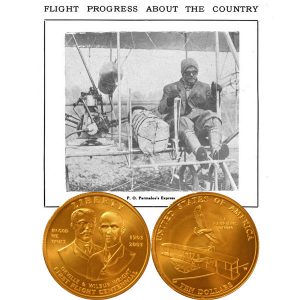