Today, the George Washington five-dollar gold coin tells the story of the activities of the Continental Congress 240 years ago.

On Thursday, October 20, 1774, George Washington as part of the Virginia delegates met in Philadelphia as part of the first Continental Congress, not quite a year after the Boston Tea Party.

The men drafted a document to the King of England describing how they were “affected with the deepest anxiety and most alarming apprehensions” about oppression of his majesty’s American subjects under a “ruinous system of colony administration adopted by the British ministry about the year 1763.”

They went on to describe their most grievous complaints and explain their recourse: “a non -importation, non-consumption, and non-exportation agreement, faithfully adhered to, will prove the most speedy, effectual, and peaceable measure.”

Their document included 14 different stipulations, some focused in Britain and some focused on the people within the colonies.

The first outlined specific goods that the colonists would no longer accept:

“That from and after the first day of December next, we will not import, into British America, from Great-Britain or Ireland, any goods, wares, or merchandise whatsoever, or from any other place, any such goods, wares, or merchandise, as shall have been exported from Great-Britain or Ireland ; nor will we, after that day, import any East-India tea from any part of the world ; nor any molasses, syrups, paneles, coffee, or pimento, from the British plantations or from Dominica ; nor wines from Madeira, or the Western Islands ; nor foreign indigo.”

Their stipulations directly correlated to those imported items with the steepest import duties and taxes that the British used to extort additional revenue from the American colonists.

In particular, number three further specified they would not accept any East India tea or any tea that required a duty to be paid.

The eighth stipulation seems odd as a standalone paragraph, but when read in the context of the Continental Congress wanting to become domestically self-sufficient and reduce imports, their requirement is not quite as strange.

“We will, in our several stations, encourage frugality, economy, and industry, and promote agriculture, arts and the manufactures of this country, especially that of wool; and will discountenance and discourage every species of extravagance and dissipation, especially all horse-racing, and all kinds of gaming, cock-fighting, exhibitions of shews, plays, and other expensive diversions and entertainments; and on the death of any relation or friend, none of us, or any of our families, will go into any further mourning-dress, than a black crape or ribbon on the arm or hat, for gentlemen, and a black ribbon and necklace for ladies, and we will discontinue the giving of gloves and scarves at funerals.”

Within their document they also addressed how the colonists would respond to price gouging for any scarce commodities.

Though not long, their specifications defined what the colonists would do to the British ships carrying the non-acceptable goods and to the colonists who continued to import the merchandise for gains.

In summary, the Continental Congress vowed to remain steadfast until the British addressed their concerns.

“And, we do solemnly bind ourselves and our constituents, under the ties aforesaid, to adhere to this association, until such parts of the several acts of parliament passed since the close of the last war, as impose or continue duties on tea, wine, molasses, syrups, paneles, coffee, sugar, pimento, indigo, foreign paper, glass, and painters’ colours, imported into America, and extend the powers of the admiralty courts beyond their ancient limits, deprive the American subject of trial by jury, authorize the judge’s certificate to indemnify the prosecutor from damages, that he might otherwise be liable to, from a trial by his peers, require oppressive security from a claimant of ships or goods seized, before he shall be allowed to defend his property, are repealed.”

As time would tell, it took a revolution to resolve the oppression of the colonists.

The George Washington five-dollar gold coin rests against a background of quill pens. 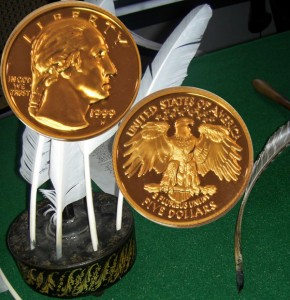