Today, the Grant Commemorative Silver Half Dollar Coin remembers the president’s letter of May 29, 1875 discussing a potential third term.

A short time subsequent to the Presidential election of 1872 the press — a portion of it — hostile to the republican party and particularly so to the administration, started the cry of Caesarism and “the Third Term.” calling lustily for me to define my position on the latter subject.

I believed it to be beneath the dignity of the office, which I have been twice called upon to fill, to answer such a question before the subject should be presented by competent authority to make a nomination or by a body of such dignity and authority as not to make a reply a fair subject of ridicule.

In fact, I have been surprised that so many sensible persons in the republican party should permit their enemy to force upon them and their party an issue, which cannot add strength to the party, no matter how met.

But a body of the dignity and party authority of a convention to make nominations for the state officers of the second state in the Union having considered this question, I deem it not improper that I should now speak.

In the first place, I never sought the office for a second, nor even for a first nomination. To the first I was called from a life position — one created by Congress expressly for me for supposed services rendered to the republic.

The position vacated I liked. It would have been most agreeable to me to have retained it until such time as Congress might have consented to my retirement with the rank and a portion of the emoluments which I so much needed, to a home where the balance of my days might be spent in peace and the enjoyment of domestic quiet, relieved from the cares which have oppressed me so constantly now for fourteen years.

But I was made to believe that the public good called me to make the sacrifice.

Without seeking the office for the “Second Term” the nomination was tendered to me by a unanimous vote of the delegates of all the states and territories, selected by the republicans of each to represent their whole number, for the purpose of making their nomination.

I cannot say that I was not pleased at this, and at the overwhelming endorsement which their action received at the election following.

But it must be remembered that all the sacrifices — except that of comfort — had been made in accepting the “First Term;” then, too, such a fire of personal abuse and slander had been kept up for four years, notwithstanding the conscientious performance of my duties to the best of my understanding — though I admit, in the light of subsequent events, many times subject to fair criticism — that an endorsement from the people, who alone govern republics, was a gratification that it is only human to have appreciated and enjoyed.

Now, for the “Third Term,” I do not want it any more than I did the first. I would not write or utter a word to change the will of the people in expressing and having their choice.

The question of the number of terms allowed to any one Executive can only come up fairly in the shape of a proposition to amend the constitution — a shape in which all political parties can participate — fixing the length of time or the number of terms for which any one person shall be eligible for the office of President.

Until such an amendment is adopted the people cannot be restricted in their choice by resolution further than they are now restricted, as to age, nativity,  &c.

It may happen in the future history of the country that to change an Executive because he has been eight years in office will prove unfortunate, if not disastrous.

The idea that any many could elect himself President, or even re-nominate himself, is preposterous.

It is a reflection upon the intelligence and patriotism of the people to suppose such a thing possible.

Any man can destroy his chances for the office, but no one can force an election or even nomination.

To recapitulate, I am not, nor have I ever been, a candidate for a re-nomination. I would not accept a nomination if it were tendered, unless it should come under such circumstances as to make it an imperative due, circumstances not likely to rise.

I congratulate the convention over which you presided for the harmony which prevailed, and for the excellent ticket put in the field, and which I hope may be triumphantly elected.

With great respect, your obedient serviant,

The Grant Commemorative Silver Half Dollar Coin shows with an image of the president, circa 1873. 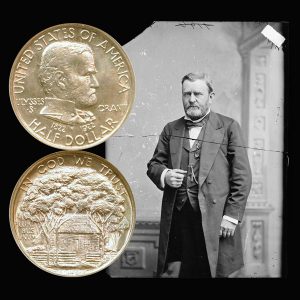