The Sarasota Herald-Tribune newspaper provided a summary of the president’s visit to Everglades City and his subsequent speech:

Everglades City — President Truman helped dedicate a 454,000-acre tract of the Florida Everglades as the Everglades National Park Saturday with a challenge to the American people to resist “raids” on their natural resources by interests who would exploit them for “private gain.”

This tiny but famed fishing town deep in the Everglades furnished the backdrop for the president’s speech on conservation and for colorful activities which included federal and state officials, Seminole Indians, tourists from many states, as well as Floridians.

Truman declared that proper use of land and water resources was as much a public responsibility as were “world order, world peace and world recovery.”

He mentioned no names when he called for constant vigilance “to prevent raids by those who would selfishly exploit our common heritage for their private gain.”

“Such raids on our natural resources,” he declared, “are not examples of enterprise and initiative. They are attempts to take from all the people for the benefit of the few.”

Before the speechmaking began, a group of 110 Seminole Indians sent a delegation of 20 to the president to present him with a multihued tribal shirt, a handbag for Mrs. Truman, and a Seminole flag.

William McKinley Osceola, 65, and Corey Osceola, descendents of the great Seminole war chief, Osceola, presented the shirt and flag but made it clear beforehand that honorary tribal brotherhood was not being extended.

The Seminoles, proud and aloof, lost a war to the United States more than a century ago and accept no white man as honorary tribesmen.

The shirt was made of 5,000 separate pieces of colored cotton. Seminole women spent a month fashioning it. The handbag, presented by medicine man Ingram Billy, is made of buckskin, palmetto fiber and cypress.

An Indian maid, Wah-Nese Red Rock, clad in a cream colored costume and with a single turkey feather in her hair, sang the national anthem.

Thousands crowded this tiny town of 600 population for the dedication ceremony in which Governor Millar F. Caldwell gave title to the land to Interior Secretary Krug, who accepted and declared it to be the nation’s 28th national park.

Truman himself described the setting in his talk:

“Here in Everglades City we can savor the atmosphere of this beautiful park area, southeast of us lies the coast of Everglades Park, cut by islands and estuaries of the Gulf of Mexico. Here are deep rivers, giant groves of colorful mangrove trees, prairie marshes and innumerable lakes and streams.

“In this park we shall preserve tarpon, trout and pompano, bear, dear and crocodiles—and rare birds of great beauty. We shall protect hundreds of kinds of wildlife which might otherwise soon be extinct.”

The president said the “wise use of our natural resources” is the foundation of the nation’s effectiveness in its efforts to maintain the spirit of its citizens, provide a good living for its people in industry, business and farming, and to bring “intelligent recognition by its citizens” of its responsibility for world order, world peace and world recovery.

“The problems of peace, like those of war, require courage and sustained effort,” he said. “If we wish this nation to remain prosperous, if we wish it still to be the home of the free, we can have it so.

“But, if we fail to heed the lessons of other nations which have permitted their natural resources to be wasted and destroyed, then we shall reap a sorry harvest.”

He condemned waste of minerals by careless mining, of forests by careless lumbering and of water resources “through failure to build hydro-electric plants,” and the wastage of soil through erosion.

Truman told the throng “I have a Little White House in Key West.”

He departed immediately after his speech for the flight back to the naval air base at Boca Chica, whence he would fly to the navy’s submarine base at Key West.

The Everglades National Park Quarter Coin shows with an image of the natural Everglades. 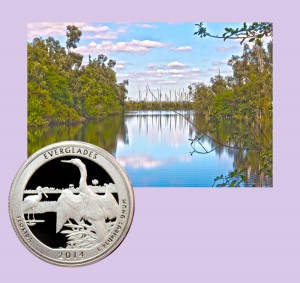