The Arizona State Quarter Coin tells part of the tale of exoneration 133 years ago.

Once a silver boomtown, Tombstone, Arizona also became notorious for the Gunfight at the OK Corral in October 1881.

At that time in Tombstone, the term “cowboy” meant men with low morals and ethics that frequently stole from others.

Wyatt, Virgil and Morgan Earp along with Doc Holliday tried to stop the cowboys.

In particular on October 26, they met a pair of brothers, Ike and Billy Clanton and Frank and Tom McLaury, at the OK Corral.

After a 30-second gunfight, Frank and Tom McLaury and Billy Clanton died. Doc Holliday and the Earp brothers Virgil and Morgan sustained injuries in the hip, leg and shoulder respectively.

Though they were not immediately arrested, soon afterward the Earps and Doc Holliday were charged with murder.

Over the next several weeks, Judge Spicer heard conflicting testimony about the events of that day and the activities of the participants prior to and during the gunfight.

On December 1, 1881, Judge Spicer wrote his final judgment excerpted below:

Defendants, Wyatt Earp and John H. Holliday, two of the defendants named in the above action, were arrested upon a warrant issued by me on the 29th day of October on a charge of murder. The complaint filed upon which the warrant was issued, accuses said defendants of the murder of Wm. Clanton, Frank McLaury and Thos. McLaury on the 26th day of last month at Tombstone, in this county.

The case has now been on hearing for the past thirty days, during which time a volume of testimony has been taken, and eminent legal talent employed by both sides.

The great importance of the case, as well as the general interest taken in it by the entire community, demand that I should be full and explicit in my findings and conclusions, and should give ample reasons for what I do.

From the mass of evidence before me – much of which is on collateral matters – I have found it necessary, for the purposes of this decision, to consider only those facts which are conceded by both sides or are established by a large preponderance of testimony.

The legal character of this homicide must, therefore, be determined by what occurred at the time, and not by the precedent facts.

To constitute the crime of murder there must be proven, not only the killing, but the felonious intent. In this case the corpus delicti, or fact of killing, is in fact admitted, as will be clearly proven. The felonious intent is as much a part to be proven as the corpus delicti, and in looking over this mass of testimony for evidence upon this point I find that it is anything but clear.

Witnesses of credibility testify that each of the deceased, or at least two of them, yielded to a demand to surrender. Other witnesses of equal credibility testify that deceased Wm. Clanton and Frank McLaury met the demand for surrender by drawing their pistols, and that the discharge of fire-arms was almost instantaneous. There is a dispute as to whether Thomas McLaury was armed at all, except with a Winchester rifle that was on the horse beside him. I will not consider this question, because it is not of controlling importance. Certain it is that the Clantons and McLaurys had among them at least two six-shooters in their hands and two Winchester rifles on their horses; therefore, if Thomas McLaury was one of a party who were thus armed, and were making felonious resistance to an arrest, and in the melee that followed was shot, the fact of his being unarmed, if it be a fact, could not of itself criminate the defendants, if they were not otherwise criminal. It is beyond doubt that William Clanton and Frank McLaury were armed, and made such effective use of their guns as to seriously wound Morgan Earp and Virgil Earp.

In determining the important question of whether the deceased offered to surrender before resisting, I must give as much weight to the testimony of persons unacquainted with the deceased or the defendants, as to the testimony of persons who were companions and acquaintances, if not partisans of the deceased, and I am of the opinion that those who observed the conflict from a short distance and from points of observation that gave them a good view of the scene, to say the least, were quite as likely to be accurate in their observation as those mingled up in or fleeing from the melee. Witnesses for the prosecution state unequivocally that Wm. Clanton fell or was shot at the first fire, and Claiborne says was shot when the pistol was only about a foot from his belly. Yet it is clear that there were no powder burns or marks on his clothes, and Judge Lucas says he saw him fire or in the act of firing several times before he was shot, and he thinks two shots afterward.

Addie Borland, who saw distinctly the approach of the Earps and the beginning of the affray from a point across the street where she could correctly observe all their movements, says she cannot tell which fired first; that the firing commenced at once from both sides upon the approach of the Earps, and that no hands were held up; that she would have seen them if there had been. Sills asserts that the firing was almost simultaneous; he cannot tell which side fired first.

Considering all the testimony together, I am of the opinion that the weight of evidence sustains and corroborates the testimony of Wyatt and Virgil Earp, that their demand for a surrender was met by William Clanton and Frank McLaury drawing or making motions to draw, their pistols. Upon this hypothesis my duty is clear. The defendants were officers charged with the duty of arresting and disarming brave and determined men who were experts in the use of firearms, as quick as thought and certain as death, and who had previously declared their intentions not to be arrested or disarmed. Under the statutes, as well as the common law, they had a right to repel force by force.

In coming to this conclusion, I give great weight to several particular circumstances connected with the affray. It is claimed by the prosecution that the deceased were shot while holding up their hands in obedience to the demand of the chief of police, and on the other hand, the defense claims that William Clanton and Frank McLaury at once drew their pistols and began firing simultaneously with the defendants. William Clanton was wounded on the wrist of his right hand on the first fire, and thereafter used his pistol with his left. This wound could not have been received with his hands thrown up, and the wound received by Thomas McLaury was such as could not have been received with his hands on his coat lapels. These circumstances being indubitable facts, throw great doubt upon the correctness of the statement of witnesses to the contrary.

In view of the past history of the country, and the generally believed existence at this time of desperate, reckless men in our midst, banded together for mutual support, and living by felonious and predatory pursuits, regarding neither life or property in their career, and at this time for men to parade the streets armed with repeating rifles and six-shooters, and demand that the chief of police of the city and his assistants should be disarmed, is a proposition both monstrous and startling. This was said by one of the deceased only a few minutes before the arrival of the Earps.

Another fact which rises up pre-eminent in the consideration of this sad affair, is the leading fact that the deceased from the very first inception of the encounter were standing their ground and fighting back, giving and taking death with unflinching bravery. It does not appear to have been a wanton slaughter of unresisting and unarmed innocents, who were yielding, graceful submission to the officers of the law, or surrendering to, or fleeing from their assailants, but armed and defiant men, accepting the wager of battle and succumbing only in death.

I cannot believe this theory, and cannot resist the firm conviction that the Earps acted wisely, discreetly and prudently to secure their own self-preservation-they saw at once the dire necessity of giving the first shot to save themselves from certain death. They acted; their shots were effective, and this alone saved all the Earp party from being slain.

In view of the facts and circumstances of the case; considering the threats made, the character and position of the parties, and the tragic results accomplished, in manner and form as they were, with all surrounding influences bearing upon the res gestae of the affair, I cannot resist the conclusion that the defendants were fully justified in committing these homicides; that it was a necessary act, done in the discharge of an official duty.

I conclude the performance of the duty imposed upon me by saying, in the language of the statute, “There being no sufficient cause to believe the within named” Wyatt S. Earp, and John H. Holliday, “guilty of the offense mention within,” I order them to be released.

Some people agreed with Judge Spicer’s ruling; others did not.

A grand jury also reviewed the evidence and the testimonies. They agreed with the judge’s ruling.

The Arizona State Quarter Coin shows against a view of Boot Hill and the resting place of Billy Clanton, Frank and Tom McLaury. 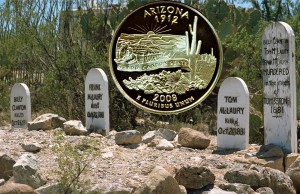