Today, the Long Island Commemorative Silver Half Dollar Coin remembers when the first train traveled the new tunnels between Harrison, NJ and the Sunnyside railroad yards in Long Island City on November 18, 1909.

From State to State under Cities and Rivers.

President McCrea and Party Make the Journey from Harrison, NJ, to Long Island City in Almost a Straight Line by Way of the New Tunnel System.

The first train carrying passengers through the new tunnels of the Pennsylvania Railroad from Harrison, NJ, to the Sunnyside railroad yards in Long Island City was run yesterday.

Aboard the train were James McCrea, president of the Pennsylvania Railroad; other officials and engineers interested in the tunnel work.

The party left Philadelphia at 9 o’clock in the morning. At Harrison they were transferred to a train made up of the Pullman observation car Pennsylvania and a big steel dining car.

A locomotive was attached to the rear of the train and with a searchlight on the forward and the observation car led the way from State to another under two rivers and the island of Manhattan.

None but the railroad officials, the engineers and the crew was on the train.

The train left Harrison at 10:50 o’clock, and travelling through the Hudson River tunnels at a moderate speed in order to give those aboard an opportunity to inspect the work, arrived at the big Pennsylvania Railroad station at Thirty-third street and Seventh avenue at 11:30, the time consumed being forty minutes.

There an hour was spent in inspecting the station, and the train started on from Long Island at 12:40, arriving in the Sunnyside yard in Long Island City at 12:54, making the time from the station in Manhattan fourteen minutes.

The traffic through the tunnels is to be by electricity.

The time consumed in yesterday’s trip is not to be considered as indicating anything in the matter of future speed.

With the searchlight on the front of the observation car the officers and engineers had a good opportunity to inspect the work.

Those in a position to criticize work of that kind remarked on the extreme dryness of the interior of the tunnels and the straight lines in which the tunnels have been built from New Jersey clear into Long Island City was a matter of favorable comment by all.

The fact that the tunnels run in almost a true line from New Jersey into Long Island will figure greatly in the matter of high speed when trains are put in operation.

A row of electric lights were strung overhead the entire length of the tunnel through which the train ran from New Jersey into Long Island City.

Nothing in the way of an official reception was arranged by the official of the Long Island Railroad to welcome the first tunnel train from New Jersey.

The observation car poked its front out of tube A, followed by the dining car and locomotive, and at good speed climbed the grade leading to the yard and then went several blocks on through the yard to a convenient switching point, where the train was sidetracked and dinner was served in the dining car.

Notwithstanding that an immense volume of smoke and gas came curling out of the mouth of tube A long after the train had reached a siding in the Sunnyside yard, no inconvenience was experienced by those aboard the train, because the locomotive pushed the train and was equipped with a coal gas consuming apparatus on the smokestack.

After dinner in the dining car in the Sunnyside yard the journey was resumed and the new work between Long Island City and Jamaica was inspected.

The party got back to Long Island City at about 3:30 o’clock, when they boarded a waiting tug and were taken to Jersey City by water.

According to present plans it is officially stated that the company hopes to have the tunnels between the Manhattan terminal station and the Sunnyside yards in Long Island City in operation by March 1 next, when trains from Montauk Point and other distant points on Long Island will be run through to Manhattan without change, while the tunnels from New Jersey to Manhattan are to be put in operation by June 1 of next year.

The Long Island Commemorative Silver Half Dollar Coin shows with a map of Long Island City showing the Pennsylvania Railroad tunnels, circa 1911. 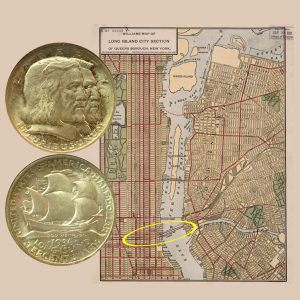