Why should the silver trime tell a postal story?

Well, in March 1851, the second session of the Thirty-First Congress approved legislation reducing the price of stamps from five cents to three cents.

As a result, the legislators introduced a new three-cent coin (the trime) that weighed less than a gram.

Less than ten years after the introduction of the trime, legislators addressed another postal issue. This time, the postal service needed rules about “dead letters,” that is undeliverable letters.

This new legislation added the concept of a return address, though in much simpler terms for a simpler time.

The magazines of the day published the legislation with this introduction:

The following are among the recent acts of Congress which the whole community will approve of. The number of dead letters will diminish under the new law; and letter writers generally, will perceive the utility of placing their printed names on each envelop. The reduced rate for the receipt and delivery of letters in the city, to one cent, is certainly a good improvement:

Chap. XIII. An Act in Relation to the Return of undelivered Letters in the Post-Office.

Be it enacted by the Senate and House of Representatives of the United States of America in Congress assembled, That when any person shall indorse on any letter his or her name and place of residence, as writer thereof, the same after remaining uncalled for at the office to which it is directed thirty days, or the time the writer may direct, shall be returned by mail to said writer; and no such letters shall be advertised, nor shall the same be treated as dead letters, until so returned to the post-office of the writer and there remain[ing] uncalled for one quarter.

Another legislative act in March 1863 governed several components of the postal system.

One section gave more definitions for addressing the “dead letters:”

Sec. 7. And be it further enacted, That the Postmaster-General is hereby authorized to regulate the periods during which undelivered letters shall remain in any post-office, and the times such letters shall be returned to the dead-letter office, and to make regulations for their return to the writers from the dead-letter office, when he is satisfied they cannot be delivered to the parties addressed. He is authorized also to order the publication of the list of non-delivered letters at any post-office, in his discretion, by writing, posted in a public place or places, or in any daily or weekly newspaper regularly published within the post-office delivery having the largest circulation within such delivery; and where no daily paper is published within the post-office delivery, such list may be published in any daily newspaper of an adjoining delivery having the largest circulation within the delivery of the post-office publishing [the] list ; but in no case shall compensation for such publication be allowed at a rate exceeding one cent for each letter so advertised; and no such publication shall be required except where the Postmaster-General shall decide that the public interest requires it : Provided, That letters addressed to parties foreign born may be published in a journal of the language most used by the parties addressed, if such be published in the same, or an adjoining delivery.

The silver trime coin (the postal coin)shows against a view of a United States Postal Service delivery vehicle circa 1864. 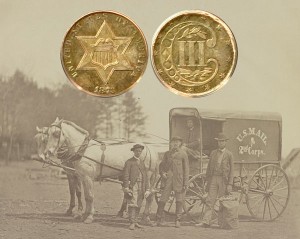