On the 164th anniversary of her statehood, the 2005 California Quarter talks today.

Through the years, many scholars have speculated on the origin of the name “California.”

In one popular idea, the early Spanish explorers named what they thought was an island from a popular book during that era. The early 16th century novel, The Adventures of Esplandian, by Spanish author Garci Rodríguez de Montalvo included the first written use of the word “California.”

In his novel, he described the mythical island:

“Know that on the right hand from the Indies exists an island called California very close to a side of the Earthly Paradise; and it was populated by black women, without any man existing there, because they lived in the way of the Amazons. They had beautiful and robust bodies, and were brave and very strong. Their island was the strongest of the World, with its cliffs and rocky shores. Their weapons were golden and so were the harnesses of the wild beasts that they were accustomed to tame and ride, because there was no other metal in the island than gold.”

Still another idea, though thought to be too far-fetched, claimed the name came from the 11th century Songs of Roland.

“My nephew’s dead, who won for me such realms! Against me then the Saxon will rebel, Hungar, Bulgar, and many hostile men, Romain, Puillain, all those are in Palerne, And in Affrike, and those in Califerne;”

The poem described Charlemagne’s loss to the Muslim army in August 778.

One scholar proposed the name meant “hot oven” from the Catalan words “calc” for lime (lime kiln) and forn for oven.

A seemingly logical idea claimed the indigenous phrase “kali forno” meaning “high mountains” influenced the name. However, the Spanish applied the name to maps before the early explorers learned from the Native Americans.

At least as early as 1533, the Spanish explorers named the area California.

In 1562, the Spanish printed the first map of the area that used the name California.

Was it a land of Amazonian women, Caliphs, hot ovens, high mountains or none of the above?

The 2005 California quarter represented the wilderness beauty found by John Muir not the mythical land of Montalvo. 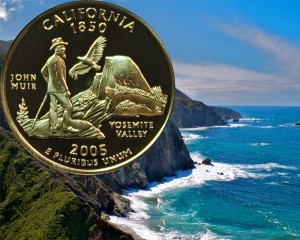