Be it known that I, Edmund D. Barbour, of the city of Boston, county of Suffolk and State of Massachusetts, have invented a new and useful Improvement in Calculating-Machines; and I do declare that the following is a full, clear, and exact description of the same, reference being had to the accompanying drawing forming part of this specification.

This invention relates to a calculating-machine which is constructed upon the same broad principle as one for which Letters Patent of the United States, No. 130,404, dated the 13th day of August, 1872, were granted to me, but differing from that machine materially in construction and operation; and the invention consists principally in a certain modification of the toothed cylinders or plates described in that machine, by which modification not Only are the toothed plates themselves reduced in size, but the entire machine is much changed and simplified in its construction, and requires, in some respects, a different manipulation for its operation.

I have, moreover, added some operative features not shown in my former machine, and have dispensed with some which are used therein.

My present invention, then, consists more particularly, first, in the use of a series of plates, cylinders, or their equivalents, (and whenever in the following specification the word “plates” is used, I desire to be understood as referring also to cylinders or other equivalent devices,) having upon their faces only a part of the rows of teeth described and shown in my former patent—that is to say, only as many rows of teeth, less one, as there are units in the first number of the second denomination of the system of notation, with reference to which the machine is constructed; or, in other words, as many rows, less one, as there are numbers in the primary denomination of such system, the several rows  representing, by the number of their teeth, the several primary numbers referred to.

Thus, in a machine constructed on the decimal system, each plate would have upon its face rows of teeth corresponding to the first nine rows of the cylinders or plates shown in the drawing attached to my former patent, these nine rows containing teeth from one to nine in number, and these teeth performing the same function as those described in the former patent—that is, the desired row being selected and brought into the path of a pinion connected with a dial, as hereinafter described, the action of said row of teeth upon said pinion when moving in its path causes the dial to register the number of teeth in the row.

In thus dispensing with those of the rows of teeth shown in my former invention which represent the products of the primary numbers multiplied by each other and by themselves, I have a smaller and more compact machine; but, inasmuch as the entire product of a desired multiplication cannot be set up on the toothed plates, said product cannot be transferred to the registering mechanism by a single movement of the slide which carries it over the selected row of teeth, but this movement must be repeated as many times as there are units in the figure used as a multiplier.

This same mechanism is used in performing operations in division, and may also be used in addition and subtraction.

The reciprocating movements of the slide also call for a provision by means of which the pinions which are acted upon by the cogged plate shall act upon the registers in one direction only.

This provision constitutes the third feature of my invention; and the fourth consists in a modification of the carrying movement, by which it carries in one direction only; and the fifth consists in a certain arrangement of devices which I have provided for printing results of any of the operations of the machine.

It may be added also that, as the result of these changes in the construction of my machine, I am enabled to perform the operation of division without the aid of the supplementary dials described in my former machine, the quotient being shown, like results of all other operations, upon the common register of the machine, all of which is clearly set forth in the following description.

Having thus fully described my invention, what I claim, and desire to receive by Letters Patent, is—

1. The calculating-machine, having a series of plates or their equivalents, each plate being provided with a single series of rows of cog teeth, the rows corresponding in the number of their teeth to the several primary numbers of the system in which the operations of the machine are to be performed, substantially as described.

2. In combination with the registering-slide, the lever V separately, and also in connection with the link K^7, handle K, and connecting gearing, substantially as described.

3. In combination with the toothed plates described in the first claim, the pinions N n and disk M^7, carrying a pawl, for the purposes described.

4. In connection with the toothed plates described in the first claim, the lever R, carrying a single pawl.

5. In combination with the registering-slide, the plate F, spring D, hinge f, type-wheels M^3 and M^4, and roller M^6, or their equivalents, for printing or stamping the results obtained.

The Three-cent Silver Trime Coin shows with one of Mr. Barbour’s diagrams of his improvements to his calculating machine, circa 1872. 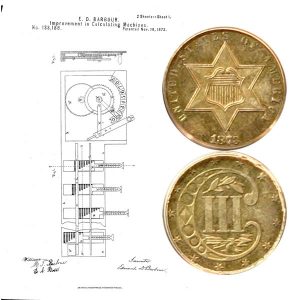