Today, the Three-Cent Trime Silver Coin remembers the Federal tax law and its description from 157 years ago.

It’s simpler than today’s Federal tax law, obviously, however some things remain the same such as some people cannot afford paying their taxes, while others look for ways around the laws.

From the Memphis Daily Appeal newspaper of November 8, 1862:

The Tax Law — What It Requires.

The following summary of the Federal tax law is given in Thompson’s Reporter:

Bankers (not corporated banks) pay a license of $100.

Banks that do any brokerage business as defined above, must take out a broker’s license, $50.

Land warrant dealers must pay a license of $25.

Bond and Mortgage. — Stamps are required for each instrument; one for the bond and one for the mortgage.

The income tax is to be paid on the income of the year commencing January 1, 1862, so that on the evening of the 31st of December everybody should have a very clear record of their income gains or profits for the year.

And as many sources of income, such as dividends and railroad bonds and stock, insurance stock, savings bank interest, etc., (they have already paid the income tax,) are not again taxed, it therefore becomes necessary to have a clear record of the sources of income, that there may be no dispute with the assessor.

A man in business must make an the net profits of his business for the year, and pay the tax on the amount, less $600.

A man may, outside of his business, spend all and even more than his profits in business; nevertheless he must pay tax on all net business profits except the $600.

And so with a salary; all over $600 must be taxed, though personal and family expenses consume it all.

Checks, drafts and orders for money, whether at sight or on time, for sums of $20 or under, are not required to be stamped.

Notes of hand, due bills, etc., if for sums of $20 or under, are not required to be stamped.

Certificates of deposit, for any amount require stamps; two cents for $100 and under; five cents for all over $100.

All checks and sight-drafts for sums of over $20, require only two cents for any amount.

Time drafts and notes require stamps in proportion to the amount; five cents and upward.

Foreign drafts, if single or solo, whether at sight or on time, are on the same scale as inland time drafts and notes of hand; but if drawn in sets, the first, second and third must each be stamped according to the scale of foreign bills in sets; three cents and upward.

The payer is required to stamp bills made abroad at the time of accepting, if on time; and at the same time of paying it at sight.

The party attaching or first using the stamp is required to cancel it, by putting his initials and date upon it.

The penalty for not doing so is fifty dollars; but in case the maker of the instrument omits to cancel the stamps, the party receiving it, or the payer may cancel it.

This, however, will not relieve the maker from the penalty.

After naming a few “certificates,” such as shares of stock, deposits, etc., the law says: “certificates of any other description than those specified, ten cents.”

A great many papers in common use will be necessarily changed in form, from a certificate to an assertion of fact.

A thousand and one dodges to avoid the stamp tax will be adopted; but as a general thing, good business men will pay the tax on their money transactions, rather than trust to a dodge that may or may not stand in law.

The Three-Cent Trime Silver Coin shows with an artist’s image of four tax assessors searching a home, circa 1862. 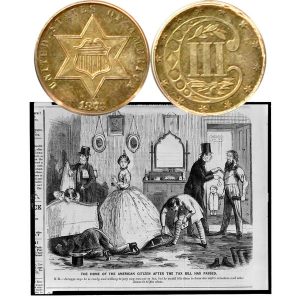