Today, the Trime Silver 3-cent Coin remembers the surveying efforts of Captain Reynolds on the islands in the Pacific Ocean 148 years ago.

The Handbook of the United States Political History compiled by Malcolm Townsend and printed in 1905 described the specific islands:

Sand Island, one and a quarter miles west of Eastern Island, nearly one and three-fourths miles long, about three-fourths of a mile wide, and forty-three feet high at its highest point, a sand dune. Average elevation, three to ten feet above sea level.

Eastern Island, one and one-fourth miles in length, half a mile in width, from six to twelve feet high.

They were the first acquisition of foreign territory away from the main land, occupied August 28, 1867, by Captain William Reynolds, commanding the U.S.S. ” Lackawanna,” under orders of the Navy Department.

The Senate in January, 1869, favored the islands as a naval station. Congress, on March 1, 1869, appropriated $50,000 for deepening the harbor entrance, named ” Welles Harbor” in honor of Gideon Welles, Secretary of the Navy.

After expending the appropriation, decided $400,000 would probably be needed, the project abandoned, the steamer “Saginaw” leaving the islands October 28, 1869.

She was wrecked on Ocean Island reef the next morning.

Earlier with more detail in the North Pacific Pilot, The Seaman’s Guide to the Islands of the North Pacific, published in 1870, William Henry Rosser included information about the islands and their geography:

Midway or Brooks islands, first made known by Captain Brooks of the bark Gambia, were surveyed in 1867 by Captain Wm. Reynolds, U.S. Navy, Commanding U.S. steamer Lackawanna. The following description of them has been published by the U.S. Hydrographic department : —

The reef encircling Brooks island is pear-shaped, with its stem part to the east ward; it is 18 miles in circumference, as measured by the patent log in the two circuits around it, and is without a break, except on its western side.

At the northwest point is a little patch of breakers, a few detached rocks, and then commences a compact coral wall of about 5 feet elevation, and, as far as our observation went, from 6 to 20 feet in width, which continues for 4.5 miles to the southward and eastward, when it loses its uniformity of surface, and presents a line of detached rocks, very little more than awash, for 2.5 miles to the southward; there, off the centre of Middle Brooks island, the rocks dip under water, but reappear 2 miles to the westward, from whence they again show as a continuous wall for about 4.5 miles to the northward and westward, ending there, and forming the south side of the entrance to Welles harbor.

This entrance is about 0.75 of a mile wide, and from its northern edge to the N.W. rocks there is a bed of coral from 1 to 16 fathoms, showing above water in one place, with occasional breakers. (N.B. — The Chart shows the entrance to be only 0.33 of a mile wide.)

The northern, eastern, and southern portions of the reef are steep-to, to the rocks. We saw the bottom in two places only where the soundings are shown on the chart.

On the west side, sheltered anchorage, during the Trade-winds, can be had in from 10 to 13 fathoms, but on a very foul bottom. The best outside anchorage is in Seward roads, in 10 to 13 fathoms water.

At the eastern extremity of the reef, or in the stem of the pear, is Middle Brooks island, also pear-shaped, 1.25 miles in length and half a mile wide, of a nearly uniform elevation, varying from 6 to 15 feet, covered with a growth of small shrubs, coarse grass, and some vines.

The soil is all coral, sand, and shells, except a small portion on the south side, where there are a few acres of mould two feet in depth. No black earth is to be found on this island. The beach is of a dazzling whiteness.

By digging 4 to 7 feet water is reached, which becomes potable after standing. Specimens of the soil, vegetation, and some of the water are forwarded with this report.

At 1.25 miles west of Middle Brooks island is lower Brooks island, (a small spit intervening); this island is a sand heap of irregular shape, 1.5 miles long, 0.75 of a mile broad, and 57 feet high at the flagstaff, its greatest elevation.

Vegetation is just commencing on this island, in the shape of detached clumps of shrubs around portions of its edge, and an occasional growth of grass, the greatest abundance being on its south-western extremity. No black earth is to be found on it; on the contrary, the glare from the white sand distresses the eye.

Captain Burdett informed me that he had seen 250 yards of it wash away, and begin to reform, during the few weeks he had been ashore. The sand spit up by the northwest rocks, which was quite conspicuous when we anchored near it on the 16th, had almost disappeared by the 27th, when I landed on it ; but, from the quantity of sand thereabouts, I presume a permanent sand island is forming.

On the lower island the agent of the Pacific Mail Company has established himself because it borders on the harbor.

The Trime Silver 3-cent Coin shows against an artist’s sketch of the USS Lackawanna in her earlier days as a naval ship that captured a confederate blockade runner in Mobile Bay in 1863. 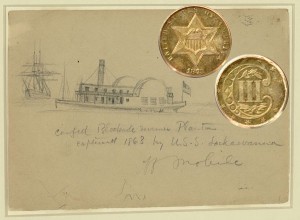