Today, P.T. Barnum of The Greatest Show on Earth and portrayed on the Bridgeport CT Silver Half Dollar Commemorative Coin helps us remember another showman just 23 years of age in 1938.

At 8 pm, An announcer introduced the show with “The Columbia Broadcasting System and its affiliated stations present Orson Welles and the Mercury Theater on the air in ‘War of the Worlds’ by H.G. Wells.”

Many people tuned into the radio on Sunday evenings, but before turning to CBS they listened to Edgar Bergen and Charlie McCarthy on NBC.

When people changed the radio dial to listen to Orson Welles at 8:12 pm, the story of the Martian invasion had begun.

The newspapers the following day gave accounts of the panic.

“Thousands of terror-stricken radio listeners throughout the country fled from their homes last night when they tuned in on a series of synthetic news broadcasts which depicted the beginning of an interplanetary war.

“The simulated news bulletins, which accompanied a CBS dramatization of H. G. Well’s fantasy, ‘The War of the Worlds”, became so realistic that they sent a wave of mass hysteria across the continent. The broadcast was intended only as fiction.

“Explanatory announcements during the program, between 8 and 9 pm, were overlooked by thousands who were led to believe that a poison gas expedition had arrived from Mars and was spreading death and destruction over the New York metropolitan area.”

“The hysteria following the one hour radio dramatic program swamped police and newspapers of New York City and of New Jersey towns and cities where the Martian adventurers were said to have landed, killing thousands of persons after they left their space rocket.

“But it was not limited to the east. In Indianapolis, and unidentified woman ran down the main aisle of St. Paul’s Episcopal church crying: ‘the world is coming to an end.’ The congregation was hastily dismissed.

“In Salt Lake City, residents packed their belongings and were only dissuaded from leaving their homes by proof it was all just entertainment.

“But, in the east, in the country being subjected to the ‘invasion’, hysteria ran riot. Several persons came forward to swear they saw the rocket land and ‘strange creatures’ climb out of it. In Newark, NJ hundreds fled from two city blocks carrying what possessions they could snatch up in their flight. Police cars screamed through the streets of a score of towns, responding to frenzied alarms.”

Even though CBS had promoted the program as fiction and had several announcements during the broadcast, people still believed the reality of the delivery by Orson Welles.

“The play was realistic enough that if heard independently of the announcements, it was identical with many ordinary news programs. It began with a weather report. An announcer said the program would continue with dance music from a hotel. Then came a few minutes of swing music. This was interrupted by a flash reporting an observatory professor had noted a series of gas explosions on the planet Mars.

“Then came a series of bulletins and first hand reporting from the scene. One of the first bulletins said a meteor had landed near Princeton, killing 1,500 persons. Soon another bulletin announced it hadn’t been a meteor at all but a metal cylinder containing ‘strange creatures’ armed with death rays who were warring on earth’s inhabitants. Then an actor, representing the secretary of the interior, came on, spoke of the terrible disaster. Then other officials urged residents to flee the cities.

” New York police reported they handled thousands of calls even while the program was on the air. Newark, Jersey City, Trenton, Philadelphia and other cities within close range of the focal point of the ‘invasion’ were equally swamped.

“In New York City, approximately 200 persons fled their apartments in one block of Riverside Drive and ran as fast as they could toward Broadway where police overtook them, soothed them, and sent them home.

Now, P.T. Barnum passed from this world before “The War of the Worlds” was published in 1898 and certainly before the 1938 radio transmission.

Based on Barnum’s marketing of his oddities for entertainment, he would certainly have appreciated the radio success of making people believe in the attack on earth.

The Bridgeport CT Commemorative Silver Half Dollar Coin with Barnum’s portrait shows against a monument recognizing where the Martians “landed” on October 30, 1938. 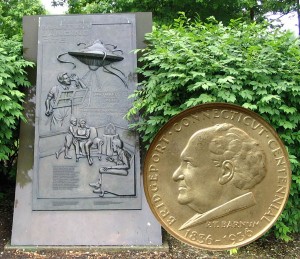