Today, the Utah State Quarter Coin remembers the joining of the East and the West with a railroad 147 years ago.

From The Pacific Tourist, Williams’ Illustrated Trans-continental Guide of Travel, from the Atlantic to the Pacific Ocean by Henry T. Williams, published in 1877:

American history, in its triumphs of skill, labor and genius, knows no event of greater, thrilling interest, than the scene which attended the driving of the last spike, which united the East and West with the bands of iron.

The completion of a project so grand in conception, so successful in execution, and likely to prove so fruitful and rich in promise, was worthy of world-wide celebrity.

Upon the 10th of May, 1869, the rival roads approached each other, and two lengths of rails were left for the day’s work.

At 8 A.M., spectators began to arrive; at quarter to 9 A. M., the whistle of the Central Pacific Railroad is heard, and the first train arrives, bringing a large number of passengers.

Then two additional trains arrive on the Union Pacific Railroad, from the East.

At a quarter of 11 A.M., the Chinese workmen commenced leveling the bed of the road, with picks and shovels, preparatory to placing the ties.

At a quarter past eleven the Governor’s train (Governor Stanford) arrived.

The engine was gaily decorated with little flags and ribbons—the red white and blue. The last tie is put in place—eight feet long, eight inches wide, and six inches thick.

It was made of California laurel, finely polished, and ornamented with a silver escutcheon, bearing the following inscription :

Then follow the names of the directors and officers of the Central Pacific Company, and of the presenter of the tie.

The exact point of contact of the road was 1,085.8 miles west from Omaha, which allowed 690 miles to the Central Pacific Railroad, for Sacramento, for their portion of the work.

Just before noon the announcement was sent to Washington, that the driving of the last spike of the railroad which connected the Atlantic and Pacific, would be communicated to all the telegraph offices in the country the instant the work was done, and instantly a large crowd gathered around the offices of the Western Union Telegraph Company to receive the welcome news.

The manager of the company placed a magnetic ball in a conspicuous position, where all present could witness the performance, and connected the same with the main lines, notifying the various offices of the country that he was ready.

In San Francisco, the wires were connected with the fire-alarm in the tower, where the heavy ring of the bell might spread the news immediately over the city, as quick as the event was completed.

Waiting for some time in impatience, at last, came this message from Promontory Point, at: 2.27 P. M. :

“Almost ready. Hats off, prayer is being offered.”

A silence for the prayer ensued; at 2.40 P.M., the bell tapped again, and the officer at Promontory said:

“We have got done praying, the spike is about to be presented.”

Chicago replied: “We understand, all are ready in the East.”

From Promontory Point. “All ready now; the spike will soon be driven. The signal will be three dots for the commencement of the blows.”

For a moment the instrument was silent, and then the hammer of the magnet tapped the bell, one, two, three, the signal. Another pause of a few seconds, and the lightning came flashing eastward, 2,400 miles to Washington; and the blows of the hammer on the spike were repeated instantly in telegraphic accents upon the bell of the Capitol.

At 2.47 P.M., Promontory Point gave the signal, “Done;” and the great American Continent was successfully spanned.

Immediately thereafter, flashed over the line, the following official announcement to the Associated Press:

Promontory Summit, Utah, May 10.—THE LAST RAIL IS LAID! THE LAST SPIKE IS DRIVEN! THE PACIFIC RAILROAD IS COM PLETED! The point of junction is 1,086 miles west of the Missouri River, and 690 miles east of Sacramento City.

Such were the telegraphic incidents that attended the completion of the greatest work of the age,—but during these few expectant moments, the scene itself at Promontory Point, was very impressive.

After the rival engines had moved up toward each other, a call was made for the people to stand back, in order that all might have a chance to see.

Prayer was offered by Rev. Dr. Todd of Massachusetts.

Brief remarks were then made by General Dodge and Governor Stanford. Three cheers were given for the Government of the United States, for the Railroad, for the Presidents, for the Star Spangled Banner, for the Laborers, and for those respectively, who furnished the means.

Four spikes were then furnished,—two gold and two silver, by Montana, Idaho, California, and Nevada.

They were each about seven inches long, and a little larger than the iron spike.

Dr. Harkness, of Sacramento, in presenting to Governor Stanford a spike of pure gold, delivered a short and appropriate speech.

The Hon. F. A. Fritle, of Nevada, presented Dr. Durant with a spike of silver, saying: “To the iron of the East, and the gold of the West, Nevada adds her link of silver to span the Continent and weld the oceans.”

Governor Stanford, presenting another spike, said: “Ribbed in iron, clad in silver, and crowned with gold, Arizona presents her offering to the enterprise that has banded the Continent and welded the oceans.”

Dr. Durant stood on the north side of the tie, and Governor Stanford on the south side. At a given signal, these gentlemen struck the spikes, and at the same instant the electric spark was sent through the wires, east and west.

The two locomotives moved up until they touched each other, and a bottle of wine was poured, as a libation on the last rail.

A number of ladies graced the ceremonies with their presence, and at 1 P.M., under an almost cloudless sky, and in the presence of about one thousand one hundred people, the greatest railroad on earth was completed.

A sumptuous repast was given to all the guests and railroad officers, and toward evening the trains each moved away and darkness fell upon the scene of joy and triumph.

Immediately after the ceremonies, the laurel tie was removed for preservation, and in its place an ordinary one substituted.

Scarcely had it been put in its place, before a grand advance was made upon it by the curiosity seekers and relic hunters and divided into numberless mementoes, and as fast as each tie was demolished and a new one substituted, this, too, shared the same fate, and probably within the first six months, there were used as many new ties.

It is said that even one of the rails did not escape the grand battery of knife and hack, and the first one had soon to be removed to give place to another.

The Utah State Quarter Coin shows with an image of the ceremony for the “wedding of the rails,” circa 1869. 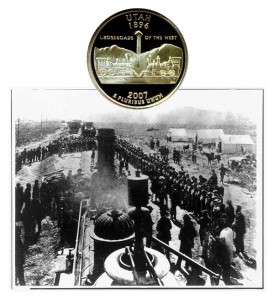