Harper’s Book of Facts noted, “First known copyright granted under the U.S. law is made to rev. William Patten of Newport for a book entitled ‘Christianity the True Theology’ 9 May 1795.”

The front of the book by Reverend Patten included a much longer “copyright” notice than is used today:

District of Rhode-Island, to -wit:

Be it remembered, That on the ninth day of May, in the nineteenth year of independence of the United States of America, Rev. William Patten, of the said district, hath deposited in this Office the title of a Book, the Right whereof he claims as Author, in the words following, to wit: ” Christianity the true Theology, and only perfect moral System; in Answer to the ‘Age of Reason;’ with an Appendix, in Answer to the ‘Examiners Examined:’ by William Patten, A. M. Minister of the second Congregational Church in Newport,” in conformity to the Act of the Congress of the United States, entitled “An Act for the encouragement of learning, by securing the copies of maps, charts and books to the authors am proprietors of such copies, during the times therein mentioned. ”

EDMUND T. ELLERY, Clerk of the District Court of Rhode-Island.

The author began his book with a message “To the PUBLIC:”

If the faith of a person render his arguments suspicious, the objection will apply, with equal force, to different denominations of character, and Christianity and deism can be impartially discussed, only by those who believe in neither.

If Christianity be true, a person may profess it, not from prejudice; but conviction, and be a minister of it from a sense of duty.

To say that the person who does profess and preach it, must be influenced by prejudice, or sinister motives, is taking for granted that Christianity is false — the very subject of dispute.

The opinions exhibited in the “Age of Reason,” did not originate with the author of that piece: the greater part of them have been mentioned by preceding writers, and received particular answers from believers in divine Revelation.

They might not have been learned by him from any of those writers, for they naturally occur to a person on rejecting Revelation: they might, therefore occur to him— and he mentions, that from thoughts bolting into his mind, “he has acquired almost all the knowledge he has.”

As they are exhibited in a new form, and connected with new objections, they require again to be considered.

Several pamphlets have already been published, either with a plain reference to the “Age of Reason” or as express answers to it.

From another being added to the collection, no argument can be drawn in favor of the merit of that performance.

Great evils sometimes require great and general attention. If this be flattering to the author of the “Age of Reason,” he has a right to conclude that his work is of importance.

It is much to be regretted, that one who has written so well on several political point, should not have thought with more justice on religion.

But on this subject how could he think with justice, seeing, as he informs us, he abandoned Christianity when a child, from the absurdity and cruelty of the doctrine of redemption by the death of Christ, as represented in a sermon read in the family — not considering, if he were a child be might not understand the doctrine.

He has grown up with prejudices against the Christian Religion: such prejudices as have induced him to neglect ecclesiastical writers, and the study even of the Bible.

In committing his performance to the patronage of the people of this country, he little suspected the enlighted views with which many would look with pity on his ignorance, and with abhorrence on his wrong and impious representations.

But some are incautious, and their esteem for the author as befriending the civil rights of mankind, especially of this country, may betray them into an approbation of his opinions generally, and thus give to gratitude and friendship, an advantage over truth and virtue.

To counteract this influence, and distinguish the most interesting truths from the grossest abuse, is an object worthy of a much better writer than now appears before the public, and cannot be unworthy the attention of any reader.

Impartially considered it will plainly appear, that the author of the “Age of Reason” is erroneous and inconsistent — that his assertions have little other support than the persuasion of an ignorant and perverse mind, opposed to facts well attested, consistent and divine — that in almost every respect he is full of prejudice, and under forms of philosophic ease and pleasantry, still shows a temper peculiarly inimical to the Christian scheme, and is in this sense a mere tarantula.

While with humility we take the gospel lyre, may the harmony and influence of its sacred doctrines be felt, and recover some, who even sleep under his envenomed bite, from madness and destruction.

The Library of Congress Commemorative Silver Dollar Coin shows with an image of the first copyrighted book, circa 1795. 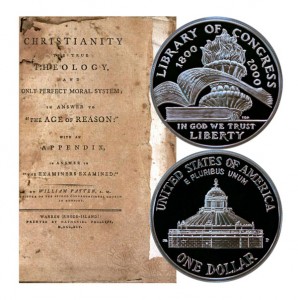