Five years ago, the US Mint released a 20th anniversary three-coin set of the American Eagle Silver coins. 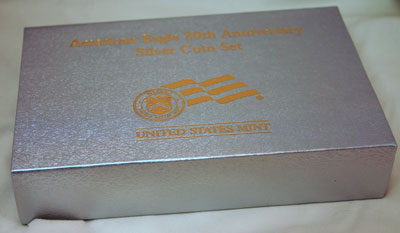 The outer sleeve slid aside to reveal another similar silver colored box. That secondary box opened to reveal a shiny gray collectible box. 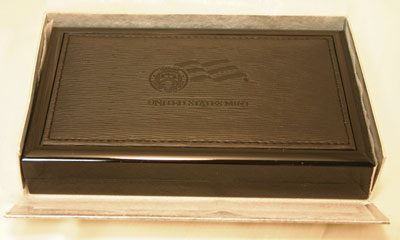 Opening the collectible box revealed the three American Eagle Silver coins and their certificate of authenticity. 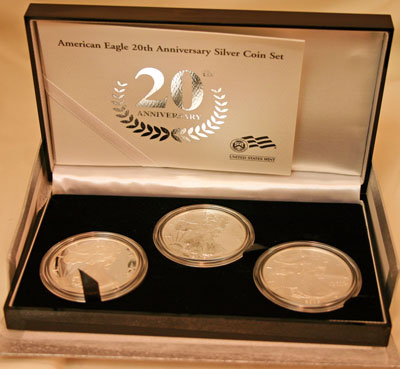 In the certificate of authenticity, the US Mint stated,

To commemorate the 20th anniversary of the American Eagle Silver Coins first produced in 1986, the United States Mint is offering this three-coin set of the American Eagle Silver Coin. The proof version features a cameo image floating on a mirror-like background, the uncirculated version has a satin finish, and the first-time offered reverse proof version features a frosted background, and a brilliant mirror-like finish on the raised elements of hte coin, including the design and various inscriptions. The proof and the uncirculated coins carry the “W” mint mark, indicating their production at the United States Mint at West Point. The reverse proof coin carries the “P” mint mark, indicating its production at the United States Mint at Philadelphia.

Taking another look at the three coins, the proof is on the left, the reverse proof in the center and the uncirculated coin is on the right. 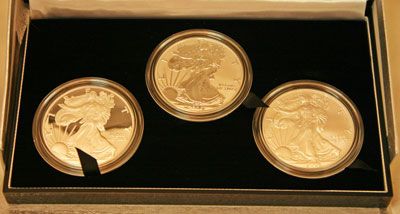 Turning the coins over, the eagles on the proof, reverse proof and uncirculated silver coins can be seen.

Now, fast forward five years, and the US Mint is offering a five coin set to commemorate the 25th anniversary of the American Silver Eagle coins.

You can find more about this set on the US Mint’s 2011 American Eagle 25th Anniversary Silver Coin Set product page.

You can also use the US Mint’s product schedule page to set an alert for more information about the coins. Currently, the US Mint has not affixed a price. The US Mint’s schedule shows the 2011 American Eagle 25th Anniversary Silver five-coin set will be available at noon on October 27.

With an ounce of silver in each, the five-coin set will contain five ounces of silver, which is one of the reasons the price is yet to be determined.

Recognized by many as the “most beautiful coin” produced by the US Mint, a 25th anniversary gives us another reason to celebrate the coin.