Today, the World’s Columbian Commemorative Silver Half Dollar Coin remembers when the entrance floor gave way under 70+ women. They fell but only a few serious injuries on the busiest day, May 20, 1893, since the opening ceremonies.

Many Ladies Injured by the Collapse of a Floor.

The Gates to Remain Closed Sunday.

By the Associated Press. Chicago, May 20: – A distressing accident marked the closing day of the week’s series of the women’s congresses in the art institute building.

There was an attractive program in Washington hall, and a great crowd of women gathered at the entrance, struggling to get in, when a section of the flooring 20 by 30 feet gave way, precipitating 75 women to the ground below, a distance of 12 feet, in a struggling mass.

The air was at once filled with cries of pain and terror. Almost a panic spread to the large audience ahead gathered in Washington hall.

Assistance was procured as quickly as possible, and the frightened and disabled women extricated.

When all were gotten out it was found that eight were seriously, though none fatally, hurt. Many others were more or less shaken up, but not Injured enough to require assistance in leaving the building.

So far as learned no prominent members of the organization represented were hurt.

The injuries were mostly to women who came as spectators, chiefly from this city, and consisted of dislocation of joints and sprains, more painful than dangerous.

Among the ladies injured is Mrs. M. H. Johnson of San Francisco who had her left leg bruised and suffered internally injured.

The subject to be considered in Washington hall which brought out such a large gathering was dress reform, and an address to be delivered by Alice Timmins Toomey of California on Ethics of Dress, and other prominent women of this and foreign countries.

Notwithstanding the accident, the program throughout all the sections of the congress was carried out as arranged, the discussions ranging from dress to sociology.

When finally the last section of the great congress adjourned, sine die, enthusiastic expressions were heard on all sides of the success of the phenomenal gathering.

Tonight an address signed by many delegates was presented to May Wright Sewall and Rachel Foster Avery, reciting the appreciation of the great work done by the two women in arranging and carrying out the congress.

Chicago, May 20.— The attendance at the world’s fair today was unusually large.

When the gatemen reported at 6 o’clock the superintendent of admissions predicted that the paid admissions would exceed those of any previous day, opening day excepted.

It was noticeable that among the attendance were crowds of school children, who took advantage of the 25 cent rate for children decided upon by the management.

The sun shone brightly; the temperature was quite high; so that the shade was grateful to pedestrians.

A grand fete was given tonight. It was unusually fine, as the great electric system is now in full and perfect running order.

Most brilliant and striking effects in the illumination of the buildings and grounds were produced.

The gates of the fair will be closed again tomorrow, at least the management says so.

The judiciary committee, which has in charge the preparation of a report on the action of the local directory ordering the return of the money appropriated by congress and opening the fair on Sunday, will bring in two reports Monday.

It is believed the majority report will oppose Sunday opening and that the minority will favor it. There will be a hot fight over the matter when it comes up for discussion.

The national world’s fair commission went into executive session this afternoon and had before them all the heads of departments, to consult as to anything which might need the immediate attention of the commission and to talk over plans for hastening to completion such parts of the fair as are not yet done.

The World’s Columbian commemorative Silver Half Dollar Coin shows with an image of the Art Institute, circa 1893. 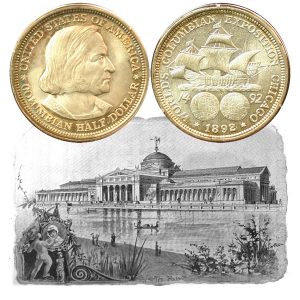