In early September 1814, the New Bedford Mercury newspaper printed an extract from a letter about Washington:

“Before this reaches you, you will be informed of the city of Washington being burnt, that is the Capitol, President’s House, Navy Yard, etc. and of our troops giving way. We are very much alarmed. The Banks are removing their specie out of the city, and no business doing.”

In the Battles of America by Sea and Land, published in 1878, Robert Tomes and John Laird Wilson included this description:

As the enemy approached Washington, late in the day of the action at Bladensburg, the army remained within a short distance of the city; and General Ross, accompanied by Admiral Cockburn, and guarded by two hundred soldiers, entered in advance with a flag of truce, prepared to offer terms.

Some reckless person, in the neighborhood of a house known as Mr. Gallatin’s, fired upon the British commander, and killed his horse.

The soldiery were immediately ordered to destroy the building, and to put to the sword all who were found within. The command was obeyed at once, and the house reduced to ashes.

The rest of the troops now marched in, and without further delay proceeded to burn and destroy.

The capitol, the treasury-building, the war-office, Washington’s house, and a bridge, were soon in flames. The capitol was first battered with cannon, and then set on fire. Its strong walls resisted the flames, but the interior was burned, with many valuable state-papers and the library—an act of vandalism which even the British writers have not ventured to defend.

From Capitol hill, where the invaders encamped, a detachment was sent forward along Pennsylvania avenue to destroy the president’s house.

A British officer, who is believed to have drawn freely upon his imagination, describes with humorous exaggeration the feast prepared, as he declares, by the president, for the entertainment of the American officers, in anticipation of victory, but which was eaten by their enemies in realization of it:—

“When the detachment sent out to destroy Mr. Madison’s house entered his dining-parlor, they found a dinner-table spread, and covers laid for forty guests.

“Several kinds of wine, in handsome cut glass decanters, were cooling on the side board; plate-holders stood by the fireplace, filled with dishes and plates; knives, forks, and spoons, were arranged for immediate use: in short, everything was ready for the entertainment of a ceremonious party.

“Such were the arrangements in the dining-room, while in the kitchen were others answerable to them in every respect.

“Spits, loaded with joints, turned before the fire; pots, saucepans, and other culinary utensils, stood upon the grate; and all the other requisites for an elegant and substantial repast were exactly in a state which indicated that they had been lately and precipitately abandoned.

“These preparations were beheld by a party of hungry soldiers, with no indifferent eye.

“An elegant dinner, even though considerably over-dressed, was a luxury to which few of them, at least for some time back, had been accustomed; and which, after the dangers and fatigues of the day, appeared peculiarly inviting.

“They sat down to it, therefore, not indeed in the most orderly manner, but with countenances which would not have disgraced a party of aldermen at a civic feast; and, having satisfied their appetites with fewer complaints than would have probably escaped their rival gourmands, and partaken pretty freely of the wines, they finished by setting fire to the house which had so liberally entertained them.”

The British general, in the meantime, entered the neighboring lodging-house of Mrs. Suter, and, quietly announcing his name, invited himself to the landlady’s hospitalities with a “Come, madam, to sup with you.”

The boisterous Cockburn soon after followed, riding his mule through the front door into the hall, and dismounting at the dining-room, where he joined General Ross and his military officers at a frugal meal prepared by the unwilling American dame, blowing out the candles as he took his seat, and declaring that he preferred the light of the burning palace.

The whole night was one of confusion and dismay. The streets, illumined by the conflagration of the public buildings, were crowded with soldiers and senators; men, women, and children; horses, carriages, and carts, loaded with household furniture—all hastening to escape a city which it was believed was doomed to total destruction by the rude British soldiery.

The sensitive Ross, disquieted by scruples in regard to the Vandal violence to which he had reluctantly consented, and troubled by fears for the security of his army, isolated in the midst of a hostile country, retired to his encampment on Capitol hill.

The coarse and brutal admiral passed the night in congenial debauchery at a brothel, and terminated a day of riot with lust.

The White House Commemorative Silver Dollar Coin shows against an image of the burned building in 1814. 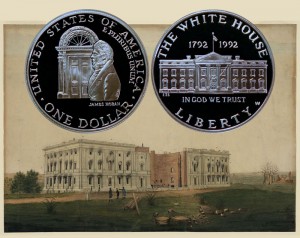