Today, the North Carolina State Quarter Coin remembers the battle fought at Ramsour’s Mill on June 20, 1780 between the Royalists and the Rebels.

Included in the History of North Carolina, From the Earliest Discoveries to the Present Time by John Wheeler Moore, published in 1880:

General Caswell in the east and General Rutherford in the west, were doing all that could be effected in collecting and mustering the eight thousand militia ordered by the Assembly. Ten thousand men had at once rushed to the field in the Tory rising and threatened invasion of 1776, but a very different state of affairs now existed.

North Carolina had greatly exerted her strength during the previous years in the large number of men sent to South Carolina. Her material resources had been crippled to furnish them.

Hundreds of the men sent to that unhealthy region had returned with ruined constitutions and broken spirits to die among their neighbors, who were being enrolled for an expedition to that same unhappy clime.

With an exhausted treasury and this great moral and material discouragement, there was still far less trouble in obtaining men than in arming and subsisting them after enrollment. The whole correspondence of the period shows a surprising scarcity of everything needed for the subsistence of armies, both in North and South Carolina.

Lord Cornwallis had been halted at Camden by this very trouble, and was then waiting for supplies to be brought up from Charleston before he could make a further advance on Charlotte.

Such was the condition of affairs in the earlier days of June, 1780, when General Rutherford, then encamped ten miles northeast of Charlotte, learned that Lieutenant-Colonel John Moore of Hamilton’s Tory Regiment, had embodied at Ramsour’s Mill, a considerable force of Loyalists from the surrounding country.

This place is within sight of the modern village of Lincolnton. It was of prime importance that such a movement should be at once crushed, but the wary hero of the Cherokee expedition recognized the importance of watching the British at Camden.

To attack Moore at Ramsour’s would have taken him forty miles from his line of defense. He therefore, learning that Lord Rawdon, who commanded the British advance at the Waxhaws, had retired to Hanging Rock, himself pushed forward ten miles to Mallard Creek.

On the evening of June 14th, General Rutherford issued orders to Colonel Francis Locke of Rowan, Major David Wilson of Mecklenburg, and Captains Falls and Brandon, to raise their respective commands and attack the Tory camp.

Colonel Locke received his orders and by the 19th, Major Joseph McDowell, Major D. Wilson, and the Captains already mentioned, had joined him with enough men to make up a total of four hundred. They encamped that night on Mountain Creek, sixteen miles from Ramsour’s.

These gallant and immortal patriots that night held a council of war, in which they determined, with full knowledge of the fact that their enemies were more than threefold stronger in numbers, to attack them at dawn of the next day.

Having come to this resolution, they resumed their march, and reached a spot one mile from the mill at day-break. The only orders for the attack were that McDowell, Brandon and Falls, with their mounted men, should charge and the infantry were to follow.

The Tories were encamped on a hill three hundred yards east of Ramsour’s Mill. This ridge lies along the southern edge of the stream forming the mill-pond.

Colonel Locke and his men approached from the north and when they reached the pickets, they were assured that no attack was being expected from that quarter.

The Tories at the outset fired and fled.

The Whig horsemen charged in pursuit, and wheeling to the right, out of the road, they fired upon the Tories.

These, seeing their assailants were so few, fired in turn upon the cavalry and repelled their attack. The advancing infantry of the Whigs opened as the light-horse went back, but pressed forward and engaged the enemy along the course of the road.

The Tories soon got well into action and recovered from the first panic of the attack, but they were forced back up the hill in spite of the superiority of numbers, until they gained ground beyond the ridge, where they were sheltered from much of the effectiveness of the Whig fire, by reason of the interposing crest of the hill.

The assailants here fell back to avoid this advantage to the foes, who pursued half down the slope. At this instant, Captain Hardin led a fresh party of Whigs into the field, who, under cover of a fence, opened a galling fire upon the right flank of the Royalists.

This lucky movement decided the day.

The Tories still fought obstinately, but were driven up the hill again. But certain portions of’ the crest were held by their assailants and though the contest was narrowed down, in a great many instances, to combats with clubbed rifles, the obstinate heroes of Colonel Locke persisted in holding their ground.

In this way the left wing of the Royalists having been thoroughly beaten at close quarters, and the centre being also heavily pressed, there was a general retreat toward the mill-pond, under a cross-fire from Hardin and the Whig centre. In this way they were driven from the field and across the mill stream.

A flag of truce was sent in by the Tories from the position they had assumed across the mill, asking a suspension of hostilities, to bury the dead.

Colonel Locke, through Major James Rutherford, made answer that he gave them ten minutes in which to surrender and that such arrangements would be then made; but upon the return of the flag only fifty Tories could be found, and they incontinently fled.

These men were neighbors, and many of them had been friends.

The only distinguishing badges were green pine twigs on the Tory’s hats and slips of white paper in those of the Whigs.

Seventy men lay dead upon the field. Of these, five were Whig Captains, and four Tory officers of the same grade. Two hundred men were wounded and fifty of the Loyalists were taken prisoners.

They were all North Carolinians, and shed their blood on opposite sides of a contest, which was to be prolonged by the very fact that such differences of opinion existed in America.

Historians of the United States who give pages to Boston Tea-parties and General Putnam’s flight down the stone steps, have strangely ignored this most brilliant and important victory.

It was as daring as the attack on Stony Point and was only less effective than King’s Mountain, from the physical impossibility of four hundred men surrounding thirteen hundred.

The battle of Ramsour’s Mill occurred on the 20th of June.

Lord Rawdon had been posted on Waxhaw Creek, thirty miles south of Charlotte. His Lordship having retired to Hanging Rock on the way to Camden, soon continued his march to the latter place.

General Rutherford learned of this movement on the 18th, and at once started a messenger to Colonel Locke to apprise him of his determination to move with the eight hundred men there assembled, against the Tory camp.

This message miscarried, and the main body of the Whigs reached the scene of conflict after the battle had been fought and the whole Royalist force scattered to the winds.

Captains Falls, Dobson, Smith, Bowman and Armstrong were slain, on the part of the assailants, while Captains Houston and McKissick were wounded. The numbers disabled were about equally divided.

The North Carolina State Quarter Coin shows with a map of the Carolinas, circa 1780. 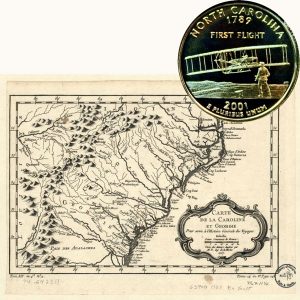