Today, the Washington/Carver Commemorative Silver Half Dollar Coin remembers another man’s tale of hard work and perseverance during difficult times.

As part of his efforts to work hard and advance, he moved from North Carolina to Selma, Alabama on December 3, 1869.

From Men of Mark, Eminent, Progressive and Rising by William J. Simmons and Henry McNeal Turner, published in 1887:

This popular and influential pastor deserves mention for the trouble he has had to overcome and make his life successful. Hard, persevering labor and strong faith in the Almighty has wrought miracles for him, and through him many things.

He was born in North Carolina, Granville county, January 20, 1847. His parents, William and Matilda Pettiford, were free, and consequently he followed the condition of his parents, and was free.

While a boy, he had little opportunity more than getting a few lessons on Saturdays and Sundays; at ten years of age he could read very well. His parents sold their little farm and removed to Person county, North Carolina, where he had the benefit of private instruction, by which a fair knowledge of the common branches was obtained.

Being the oldest child, a part of the burdens of the family were placed on his shoulders; but all the time he continued his studies and would get help here and there from individuals. The rigorous duties of the farm were indeed a heavy task, but, nothing daunted, only served as the means to rise in the hands of this struggling young man.

Those days seem now as many of the best; they toughened his muscles, gave him confidence and patience. With all this he has become an ambitious and hard working minister.

Converted July 4, 1868, and baptized August 3, 1868. by Ezekiel Horton, in Salisbury, North Carolina, that life was begun which made of the rude farmer boy an apostle of Christ and an upright, honest man.

Soon the place of clerk to the Pleasant Grove church of which he was a member was vacant, and he was elected to the vacancy by unanimous vote. July 4, 1869; the young man was married to Miss Mary Jane Farley, daughter of Joseph Farley.

Scarcity of business forced him to change his place of residence from North Carolina to Selma, Alabama, December, 3, 1869, where his knowledge of farming and books secured him work near Uniontown, not only as a farm hand but as a teacher.

Affliction came to him in the loss of the partner of his bosom on March 8, 1870, only about eight months of married life having been enjoyed. This determined his course in getting further education; with a slender purse but strong arms and a full heart, he entered the State Normal school at Marion, Alabama, and remained seven years, teaching in vacations to secure the necessary means to pay expenses the following year.

Once illness came on and the term opening, found no money on hand with which to commence; but nothing daunted, a job of work was sought; a garden was found in which he worked hard two and a half hours before and after school at ten cents an hour. This enabled him to get through the year with only nine dollars debt.

This seems a clear demonstration of the fact that if parents will teach their children some kind of work while young, it will help them to rise in the world. It is also evident that his knowledge of farming brought him from the barn-yard to the pulpit; from the “country school” to a membership of the Board of Trustees of a university.

His family consists of wife and three children. His wife is a lady of education, full of energy and push, and in all his labors contributes very largely by way of encouragement and material help.

The reverend gentleman has always so comported himself as to gain the recommendation of the State officials and of all with whom he associates.

Of him Brother. H. Woodsmall says, in a letter of recommendation to the American Baptist Home Mission Society:

I take special pleasure in commending Rev. W. R. Pettiford, pastor of the Colored Baptist church, Birmingham, as a minister worthy of the Christian regard and confidence of all whom it may concern. I have known him during the past eight years; he was assistant teacher and a pupil in the Alabama Baptist Normal Theological school at Selma about three years, during the time I had charge of that institution. He was for quite awhile financial agent of the school and collected a large amount of money. He not only made a successful agent but faithfully accounted for all monies collected. He was equally faithful as a missionary, and I have always found him a man of admirable spirit, as well as honest and trustworthy. His influence can but be good in any community where he may labor. I regard it as a specially fortunate thing for the Baptist cause that he is pastor of one of the leading churches in Birmingham at this time.

No man in the United States has better means of knowing the general worth of Southern ministers than the brother who writes the above letter. He has lectured to more colored ministers in the South in any one year than perhaps any other Southern missionary has in any five years, and his testimony is acceptable in every district in the South where he has labored.

The Washington/Carver Commemorative Silver Half Dollar Coin shows with an artist’s image of W. R. Pettiford. 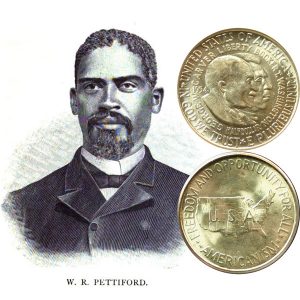