Today, the Rhode Island State Quarter Coin remembers when the British burned many boats at Warren along with homes and businesses on May 25, 1778.

Two different viewpoints provided insights into the events of that day.

First, the British news of 1778 gave details from the perspective of his Majesty’s commanders.

From The London Magazine, Or, Gentleman’s Monthly Intelligencer of July 1778:

Extract of a Letter from Lord Viscount Howe, Commander in Chief of his Majesty’s Ships in North America, to Mr. Stephens, dated on board the Eagle, in the Delaware, the 19th of June, 1778, received the 22d inst.

I am informed by Capt. Griffith, that a detachment of the garrison of Rhode Island, under the command of Lieut. Col. Campbell, of the 2nd regiment, was embarked the 25th of last month, in the flat boats conducted by Capt. Clayton; and, by a well-concerted operation, destroyed 125 boats, collected by the rebels in Hickamanet river, together with a galley under repair, meant to be employed, in conjunction with the boats, for a purposed invasion of Rhode Island.

A large quantity of pitch, tar, plank, and other materials for ship-building, was burnt with them.

Another division of boats from the ships of war, supported by the Pigot galley, (lately armed) and commanded by Lieut. Stanhope, of the Nonsuch, under the direction of Capt. Reeve, were at the same time ordered against, and succeeded to surprise and take a galley of force, which the rebels had placed in Warren Creek.

On the 30th of the same month a second detachment of the troops were sent in the boats of the squadron, conducted by Lieut. Christian, commander of the King’s Fisher, to destroy the saw mills on a creek near Taunton river, then in use for preparing materials to build boats and other suitable craft for the purpose as before-mentioned. This service was performed with equal good effect.

The behavior of Capt. Reeve, and of Lieutenants Kempthorne, Stanhope, and Christian, is greatly commended by Capt. Griffith. I am at the same time to observe, that the good disposition made for these undertakings, as well as the vigorous execution, appears to have contributed much to their success.

Next, an American living at that time in nearby Barrington gave another insight into that day.

From A History of Barrington, Rhode Island by Thomas Williams Bicknell published in 1898:

At the time of the landing of a force of 500 British and Hessian troops, on Sunday, May 25, 1778, on the northern boundary of the town of Bristol, to invade and pillage Warren, Moses Tyler was conspicuous in his efforts to prevent them from crossing the river to invade Barrington.

The British had already blown up the powder magazine, burned the Baptist meeting-house, and the adjoining parsonage, and several other buildings in Warren.

During this work of destruction and pillage, a few of the Hessian soldiers made their way to the north part of the town, but soon returned to join the main body.

Two Hessian soldiers, more adventurous than the rest, secured a small boat and prepared to cross the river to the Barrington side to continue their work of destruction.

Mr. Tyler, with musket ready, and with ammunition prepared by the hands of his wife and daughter, hastened to the bank of the river just below his house, ready to dispute the passage of the two red-coats across.

As they pushed off into the stream he hailed them, and warned them of their peril, and of the fate that awaited them.

They replied to his warning with derisive oaths, and, nothing daunted, continued their course.

Waiting until they got within range, Mr. Tyler took aim and fired, instantly killing one of the soldiers.

The other, realizing that the same fate awaited him, hastily turned the boat about, and pulled for the Warren shore.

Mr. Tyler, jumping into his own boat, pursued but could not overtake the fleeing Hessian, who, in his haste to escape, was only too glad to abandon his dead comrade to his pursuer.

When he reached the abandoned boat, Mr. Tyler took possession of the dead Hessian’s musket and accoutrements, and with the assistance of a neighbor, gave him a decent burial and returned to his home.

During his lifetime, Mr. Tyler kept in his possession this musket as an interesting relic of his experience during the American Revolution.

In his old age and shortly before his death, he gave it, together with the story of its capture, to the keeping of his then young grandson, Haile Bowen of Warren, who cherished it with affectionate regard during his long life.

In his old age he likewise gave it into the care of his young grandson, Sylvanus Haile Bowen, in whose affectionate care it will remain, to be, in time, again transmitted to the same jealous care of his descendants, an eloquent reminder of the long and unequal struggle of the American Colonies for their independence, and of the noble character of their honored and honorable ancestor.

The Rhode Island State Quarter Coin shows with an image of the city of Warren, circa 1886. 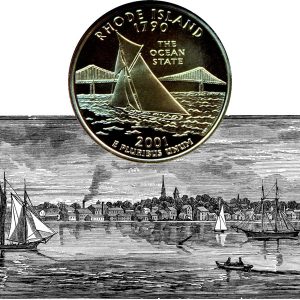