Today, the Shield Nickel Coin takes us back to 1880 and the opinions of the day on collecting old and rare coins.

Those who have a weakness for collecting old and rare coins are generally men of wealth who indulge in it as a pleasant pastime.

They can afford to pay handsome prices for rarities and become amateur numismatists.

The principal coin center of the United States is Philadelphia, mainly because the mint is situated there.

In Eastern cities, such as New York and Boston, coin-collecting is more indulged in than in the South or West.

There are about one hundred journals devoted to the coin and stamp interest published in the United States.

The prices of rare coins fluctuates considerably from time to time.

Probably the rarest coin is the silver dollar of 1804.

There are said, on good authority, to be only six of them in the whole world.

About two years ago Mr. Gambs ran across a half-dime of the year 1802, which was an unusually fine specimen.

He sold it for $50 to Wm. P. Brown, of New York, who shortly afterwards refused $200 for it, thinking that it would bring more at auction.

The second rarest American coin is the half-dollar of 1852.

They were only coined at the Philadelphia Mint.

Cents and half-dollars are the principal coins looked after by coin collectors, more of these denominations being sold than any other.

The half-cents, which were coined from 1793 to 1857, for some dates within that period bring handsome prices.

General  W. T. Sherman is said to be a great collector of coins, and the late King Victor Emanuel and A. T. Stewart, the great dry-goods merchant, were both active stamp collectors.

In New York, Philadelphia and Boston auction sales of collections are frequently held.

First of all, what were the prices for these rare coins in today’s dollars? And, how do the values compare to the 2017 Red Book numbers?

Time and rarity sure beat inflation in this case.

Though he did not mention the 1880 values, the other rare coins he listed vary in their collectible value today.

It’s interesting to compare values from 1880 to now and to see how coins can grow in value.

Though, his statement that numismatics is a rich man’s pastime should be changed to its a prudent man’s pastime.

The Shield Nickel Coin shows with an image of a coining press, circa 1861. 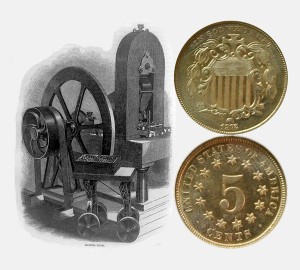