Today, the George Washington Commemorative Silver Half Dollar Coin remembers when the General proclaimed May 7, 1778 a day of Thanksgiving among the troops at Valley Forge.

From the Writings of George Washington, Volume V, collected and edited by Jared Sparks, published in 1834:

“It having pleased the Almighty Ruler of the Universe to defend the cause of the United American States, and finally to raise us up a powerful friend among the princes of the earth, to establish our liberty and independency upon a lasting foundation; it becomes us to set apart a day for gratefully acknowledging the divine goodness, and celebrating the important event, which we owe to his divine interposition.

“The several brigades are to be assembled for this purpose at nine o’clock to-morrow morning, when their chaplains will communicate the intelligence contained in the Postscript of the Pennsylvania Gazette of the 2d instant, and offer up thanksgiving, and deliver a discourse suitable to the occasion.

“At half after ten o’clock a cannon will be fired, which is to be a signal for the men to be under arms; the brigade-inspectors will then inspect their dress and arms and form the battalions according to the instructions given them, and announce to the commanding officers of the brigade that the battalions are formed.

“The commanders of brigades will then appoint the field-officers to the battalions, after which each battalion will be ordered to load and ground their arms.

“At half past eleven a second cannon will be fired as a signal for the march, upon which the several brigades will begin their march by wheeling to the right by platoons, and proceed by the nearest way to the left of their ground by the new position; this will be pointed out by the brigade-inspectors.

“A third signal will then be given, on which there will be a discharge of thirteen cannon; after which a running fire of the infantry will begin on the right of Wood ford’s, and continue throughout the front line; it will then be taken upon the left of the second line and continue to the right upon a signal given, the whole army will huzza, Long live the King of France; the artillery then begins again and fires thirteen rounds; this will be succeeded by a second general discharge of the musketry in a running fire, and huzza, Long live the friendly European Powers. The last discharge of thirteen pieces of artillery will be given, followed by a general running fire, and huzza, The American States.”

The following is an extract from a letter, written by an officer who was present.

“Last Wednesday was set apart as a day of general rejoicing, when we had a feu de joie conducted with the greatest order and regularity.

“The army made a most brilliant appearance; after which his Excellency dined in public, with all the officers of his army, attended with a band of music.

“I never was present where there was such unfeigned and perfect joy, as was discovered in every countenance.

“The entertainment was concluded with a number of patriotic toasts, attended with huzzas.

“When the General took his leave, there was a universal clap, with loud huzzas, which continued till he had proceeded a quarter of a mile, during which time there were a thousand hats tossed in the air.

“His Excellency turned round with his retinue, and huzzaed several times.” — Valley Forge, May 9th.

The George Washington Commemorative Silver Half Dollar Coin shows with an image, circa 1878, of his headquarters at Valley Forge. 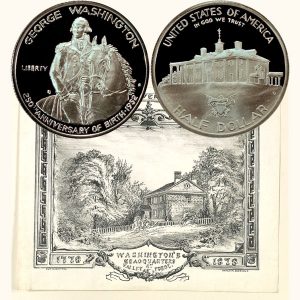