Today, the Utah State Quarter Coin remembers when President Cleveland signed the proclamation recognizing the territory as a new state on January 4, 1896.

The people of the Utah territory tried many times to become a state with their first efforts in 1849.

After many attempts and changes in circumstances, the people joined the Union as the 45th state 122 years ago.

From the Report of the Utah Commission to the Secretary of the Interior for 1896, an excerpt from Governor Wells inaugural speech after the recognition of statehood:

It is related of Tamerlane, the celebrated warrior, that on one occasion, having been utterly routed and defeated by his enemies, he sought refuge in an old and crumbling ruin and yielded himself up to the most poignant despondency.

While there he espied an ant struggling to carry a kernel of corn up a crevice in the wall.

Sixty-nine times the ant struggled to reach the top and each time fell backward upon the floor, but upon the seventieth time it succeeded in crossing the difficult part of the ascent and bore away the load in triumph.

The warrior was so moved by the lesson in patience and perseverance taught by the little ant that he caught new courage from that moment, and, rallying his warriors, he made a final onslaught upon his foes with an energy born of renewed hope and came off victorious.

So it was with Utah’s statehood, although the analogy is not complete, because Utah’s filial and successful effort for statehood was no more energetic than several which preceded it, the success of it being due to the changed conditions rather than to increased endeavor.

To make the record complete, it only remains to be said that Congress passed the enabling act for Utah’s admission, which was approved by President Cleveland, .July 16, 1894. The constitutional convention was held in March, April, and May, 1895, when the constitution of the State was framed.

The people ratified it on November 5, 1895, and the day before yesterday, January 4,1896, the President proclaimed Utah a State on an equal footing with the original States of the American Union.

The constitution which forms the fundamental law of our State contains these provisions:

“There shall be no union of church and state, nor shall any church dominate the State or interfere with its functions. Perfect toleration of religious sentiment la guaranteed.

“No inhabitants of this State shall ever be molested in person or property on account of his or her mode of religious worship; but polygamous or plural marriages are forever prohibited.

“The act of the governor and legislative assembly of the Territory of Utah, entitled ‘An act to punish polygamy and other kindred offenses, approved February 4, A. D. 1892,’ in so far as the same defines and imposes penalties for polygamy, is hereby declared to be in force in the State of Utah.”

From this brief resum6 of the main incidents of history connected with Utah’s struggle for statehood, it will be patent how earnest have been the efforts of a majority of the people to avail themselves of the full rights of American citizenship on the one hand, and how careful and jealous the Government to withhold the coveted boon until the political conditions of the Territory might fully warrant its bestowal, on the other hand.

It is therefore a subject of the supremest satisfaction to have the privilege at this time of congratulating all the people of Utah of every party, creed, opinion, and belief, upon the happy termination of all their former contentions and the burial underneath the soil of friendliness and future hope and progress of all the strife and bitterness and unrest of the past four decades.

That these pleasant relations will continue, I have not the slightest doubt. There has been too much of sacrifice, too many lessons learned, too many hardships endured, too much time wasted that might have been improved in forging ahead, ever to permit the insidious voice of prejudice and distrust to further disturb our equanimity.

What better evidence of the entire sincerity of all the people in their political convictions could be given than that Chief .Justice Zane, who in the past, acting under a conscientious regard for duty, has sentenced hundreds of Mormons to the penitentiary, now sits upon this platform as the honored choice of the electors of Utah for the highest judicial office of the State; and that a Mormon, born and reared, should be delivering from the same platform this address as the governor of Utah?

Is it not an object lesson, showing better than words could express, that old conditions in Utah are gone, never to return; that old wounds are healed, and that no vestige of old animosities remain?

Let us learn to resent, then, the absurd attacks that are made from time to time upon our sincerity by ignorant and prejudiced persons outside of Utah, and let us learn to know and respect each other more and thus cement and intensify the fraternal sentiments now so widespread in our community to the end, that by a mighty unity of purpose and Christian resolution, we may be able to insure that domestic tranquility, promote that general welfare, and secure those blessings of liberty to ourselves and our posterity guaranteed by the Constitution of the United States.

Undertaking as we do to-day the management and control of our own affairs, it is well also that we should examine our financial and industrial condition, to ascertain if we are equal to the grave responsibilities which confront us.

Computing the gold and silver at their mint valuation and other metals at their value at the seaboard would increase the value of the mineral product to $14,519,959.

We have in Utah 1,315 miles of railroad and !H) miles of street railroad.

Our population in 1895 was 247,334, which is greater than the population of the State of Delaware or Nevada or Montana or Idaho or Wyoming or North Dakota.

Surely, with such credentials as these, the admission gates ought to be and are flung wide open, and Utah passes the portals of the Union while the New Year bells for 1896 are yet ringing, with all the pomp and splendor befitting her power, her prestige, and her past achievements.

Our future will be what we make it.

If with all her resources, her location in the very heart of the continent, her fruitful soil, her wealth of water, her glorified air, her thermal springs, her wonderful lake, her phenomenal fields of natural gas, her new lands to cultivate, her new mines to open, her new railroads and factories to build, her new reservoirs and canals to construct — if with all these, added to the impetus which statehood gives, Utah does not become one of the foremost States of the Union, it will be the fault of her own people.

“God helps them that help themselves.” In His bounteous wisdom He has given us a paradise of mountain and plain. It remains for us to fashion it so that it will be pleasing in His sight.

That which has been done for the development of Utah has been well done. Her resources have been developed evenly, each one relying and leaning upon the others, so that she has the greatest diversity of industry, and offers the greatest variety of occupation of any State in the Union.

It has been truly said of her, that if intercourse were totally cut off from the outside, there are very few of the necessaries, or the luxuries of life that could not be produced within her borders.

The Utah State Quarter Coin shows with a portrait of Governor Wells, first to hold the position for the state. 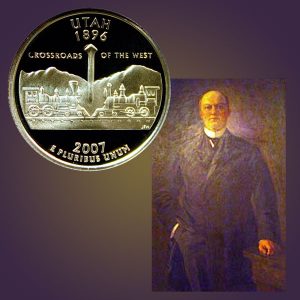