Today, the US Capitol Commemorative Silver Dollar Coin remembers when the State of Virginia agreed to cede land up to “ten miles square” for the federal capital on December 3, 1789.

Fifty-seven years later, Congress gave Virginia all of her land back.

From the Official Congressional Directory, published in 1979:

The Capitol is situated on a plateau 88 feet above the level of the Potomac River and covers an area of 175,170 square feet, or approximately 4 acres.

Its length, from north to south, is 751 feet 4 inches; its greatest width, including approaches, is 350 feet.

The geographic position of the head of the Statue of Freedom surmounting the dome is described by the U.S. Coast and Geodetic Survey as latitude 38°53’22.909” north and longitude 77°00’33.706″ west from Greenwich.

Its height above the base line on the east front to the top of the Statue of Freedom is 287 feet 5.5 inches. The dome is built of iron, and the aggregate weight of material used in its construction is 8,909,200 pounds.

The Statue of Freedom, 19 feet 6 inches in height, is entirely of bronze and weighs 14,985 pounds. The pedestal is of iron, painted to conform to the color of the statue.

The statue was modeled by Thomas Crawford, American sculptor, in Rome, Italy, and the plaster model was shipped to this country.

In addition, the sculptor, Thomas Crawford, was paid $3,000 for the plaster model, making the entire cost of the statue $23,796.82. The last section of the statue, the head and shoulders, was raised into position on December 2, 1863.

Selection of a Site for the National Capital

When this Nation emerged victorious from its struggle for liberty, it had no site for its Federal Government.

The subject of a permanent Capital for the General Government of the United States was first approached in Congress on the 30th day of April 1783.

The Constitution of the United States, provided in Article I, Section 8. the following:

“To exercise exclusive legislation in all cases whatsoever over such district (not exceeding ten miles square) as may, by cession of particular States, and the acceptance of Congress, become the seat of the Government of the United States, . . . .”

The State of Maryland, by Act approved December 23, 1788, did cede to Congress “any district in this State, not exceeding ten miles square, . . . “

The State of Virginia, by Act approved December 3, 1789, also ceded “not exceeding ten miles square, or any lesser quantity . . . .”

These cessions of territory were accepted by Act of Congress approved July 16, 1790. “That a district or territory not exceeding ten miles square to be located as hereafter directed on the river Potomac, at some space between the mouths of the Eastern branch and Conogocheague, be, and the same is hereby, accepted for the permanent seat of the Government of the United States: . . . .”

President Washington, by Proclamation dated January 24, 1791, designated the experimental boundary lines of the District, as beginning at a point on Hunting Creek (in Virginia where it enters the Potomac River) and ordered the Commissioners appointed by him on January 22, 1791, “to survey, and by proper metes and bounds to define and limit the part within the same which is hereinbefore directed for immediate location and acceptance; . . .”

The lines designated in the proclamation of January 24, 1791, were approved by Congress but as the original act of July 16, 1790, required the location of the District “above the mouth of the Eastern Branch or Anacostia river,” the act was amended March 3, 1791, as follows: “and that it shall be lawful for the President to make any part of the said territory, below the said limit, and above the mouth of Huntington (sic) Creek, a part of the said district,” and also provided “That nothing herein contained shall authorize the erection of the public buildings otherwise than on the Maryland side of the river Potomac, as required by the aforesaid act.”

After an agreement with the landowners of the area within the city proper on March 30, 1791, President Washington by Proclamation on the same day, fixed the boundary as “Beginning at Jones’s Point, being the upper Cape of Hunting Creek, in Virginia, and at an angle in the outset of forty-five degrees west of the north and running in a direct line ten miles, for the first line; then beginning again at the same Jones’s Point, and running another direct line, at a right angle with the first, across the Potomac ten miles, for the second line; thence from the termination of the said first and second lines, running two other lines of ten miles each, the one crossing the Eastern Branch aforesaid and the other the Potomac, and meeting each other in a point.”

On April 15, 1791, the cornerstone of the lines of the Federal territory was laid at Jones’s Point “with great solemnity” in the presence of the Commissioners and a large number of persons.

Major Pierre Charles L’Enfant was entrusted to prepare plans for laying out the city into streets, avenues, squares, lots, etc., and the plan was carried out under the direction of Andrew Ellicott.

On March 2, 1797, President Washington, by proclamation, directed the trustees, Thomas Beall of George, and John M. Gantt, to “convey all the streets in the city of Washington as they are laid out and delineated in the plan of the said city . . . to the use of the United States forever, . . .”

The proclamation also described the public appropriations (later called reservations) as areas for public domain of which number two, including the Mall, East of 15th Street, was to be Capitol Square.

The area selected for “the Congress House” was on Jenkins’ Hill, a part of Cerne Abbey Manor, owned by Daniel Carroll of Duddington, who was one of the original proprietors and a signer of the agreement of March 30, 1791, wherein it recites, “For the streets, the proprietors shall receive no compensation, but for the squares or lands in any form which shall be taken for public buildings or any kind of public improvements or uses, the proprietors whose land shall be so taken shall receive at the rate of £25 per acre, to be paid by the public.” (Note: a pound of currency at that time was equal to $2.66+ or $66.66 per acre.)

By Act of Congress approved July 9, 1846 (9 Stat. 35), the entire area previously ceded by the State of Virginia on December 3, 1789, was returned to that State as not being required or necessary for the use of the District.

Plans for the Capitol Building

After a site for the Capitol was selected, the Commissioners placed advertisements offering a prize of $500 or a medal of the same value, for the “most approved plan” for a Capitol Building.

Sixteen plans were submitted—some writers claim 17—but of these plans none was wholly satisfactory.

In October 1792, Dr. William Thornton, a versatile physician of Tortola, West Indies, requested by letter an opportunity to present a plan as within the terms of the original advertisement.

The request was granted and his plan accepted by the Commissioners on April 5, 1793.

President Washington approved the plan on July 25, 1793, and on September 18, 1793, the cornerstone was laid with Masonic ceremonies in the southeast corner of the north section of the building.

Thornton’s plan provided for a central section nearly square in area, surmounted by a low dome, this central section to be flanked on the north and south by rectangular buildings, with a length of 126 feet and a width of 120 feet.

The northern wing was completed in 1800. In this small building the legislative and judicial branches of the government, as well as the courts of the District of Columbia, were accommodated.

The US Capitol Commemorative Silver Dollar Coin shows with an artist’s image of the federal city, circa 1800. 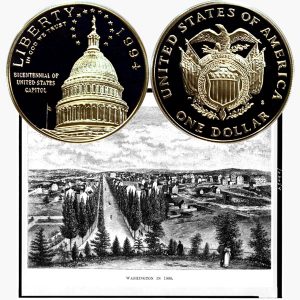