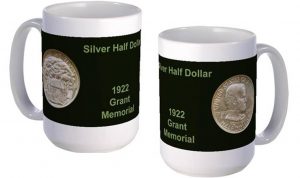 Today, the Grant Commemorative Silver Half Dollar Coin remembers when the Union League Club unveiled the equestrian statue of the man on April 25, 1896.

Though his birth date was April 27th, they presented the statue to the city on a Saturday with all due reverence and ceremony.

From the Christian Work, Illustrated Family Newspaper, of April 29, 1897:

The most recent Grant monument, excepting the Riverside Mausoleum, and probably the best equestrian statue of the great commander that has ever been made, is that by William Ordway Partridge, which adorns the city of Brooklyn, N. Y., an excellent illustration of which we present upon this page, and which was prepared expressly for the Christian Work.

This monument was presented to the city of Brooklyn by the Union League Club, and was unveiled with civic and military ceremonies one year ago.

The statue as described in the Brooklyn Daily Eagle Almanac of 1897:

The statue represents General Grant on the battlefield, and is pronounced by prominent members of his staff and others who have often seen the General in active service, as strikingly lifelike.

The pedestal on which the statue stands is a granite block, sixteen feet high and weighing over one hundred tons; the base, also of granite, weighs twenty-two tons.

The statue itself is of bronze, and is fifteen feet eight Inches in height.

Inscribed on the front of the pedestal is the single word “Grant,” while on the opposite end is the following: “Presented to the City by the Union League Club of Brooklyn, April 27. 1896.”

The date, April 27, is the anniversary of the General’s birth.

The idea of erecting this monument originated with some of the war veteran members of the Union League Club; committees were appointed, funds obtained and Sculptor William Ordway Partridge was requested to prepare the model.

The statue is a lasting tribute to his genius and a valued ornament to the city; no other municipality in the Union has so fine a statue of the illustrious soldier or one which appeals in its realism so directly to the hearts of the people.

The parade, which was reviewed by Governor Morton, was led by Grand Marshal Geo A. Price and Lieut. Harry E. Smith, U. S. A., adjutant general and chief of staff, escorted by twenty-five members of the Riding and Driving Club on horseback, under the leadership of Colonel John N. Partridge.

The First division of the military was composed of United States regular troops and marines with the Fort Hamilton and Governor’s Island bands, and commanded by Lieutenant Colonel M. P. Miller, U. S. A.

Grand Army of the Republic posts composed the Third division; they were commanded by Brevet Major-General Isaac S. Catlin (retired), grand marshal G. A. R., accompanied by his staff, and thirty-two posts.

The Fourth and last division, commanded by School Principal William L. Felter, of School No. 15. consisted of the American Guard, composed of boys from Public Schools Nos. 11, 16, 44, 78, 83, 90 and 109, and the Cadet Corps of the Hebrew Orphan Asylum, Captain Isidor Fauerbach.

The American flags which covered the statue were removed by Ulysses S. Grant, 3d, the son of Colonel Frederick D. Grant, and grandson of the General.

The ceremonies were opened with prayer by the Rev. Dr. A. J. F. Behrends, chaplain of the Thirteenth Regiment.

General Horace Porter delivered the oration, sketching in a masterly manner the career and services of the great soldier.

The Grant Commemorative Silver Half Dollar Coin shows with an image of the statue erected in Brooklyn. 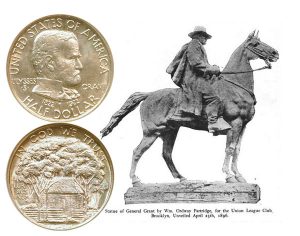