Prior to that, the Minneapolis Journal newspaper of August 26, 1906, described the natural wonder:

Strange Peak is a Wyoming Wonder

Deadwood, S. D., Aug. 25.— In Devils Tower, Wyoming has one of the strangest mountains on the continent. As a mountain it is not large, being only 600 feet high and one mile around the base.

Its strangeness lies in its peculiar shape and formation, shown in the accompanying picture. For most of its height it is almost perpendicular, making the ascent next to impossible.

Arthur Jobe, a mining engineer, however, recently scaled the tower. On arriving at the top he found that it was a flat surface without soil save disintegrated rock, but bearing cactus, moss and fern. It was large enough in area for a baseball game to be played upon it.

The descent of the tower was the most perilous of the adventure. It was necessary to crawl down backward part of the way, letting himself down inch by inch by bracing his elbows and limbs against the, friendly columns.

Whereas, It is provided by section two of the Act of Congress, approved June 8, 1906, entitled, “An Act for the preservation of American Antiquities,” “That the President of the United States is hereby authorized, in his discretion, to declare by public proclamation historic land marks, historic and prehistoric structures, and other objects of historic or scientific interest that are situated upon the lands owned or controlled by the Government of the United States to be National Monuments, and may reserve as a part thereof parcels of land, the limits of which in all cases shall be confined to the smallest area compatible with the proper care and management of the object to be protected;”

And, whereas, the lofty and isolated rock in the State of Wyoming, known as the “Devils Tower,” situated upon the public lands owned and controlled by the United States is such an extraordinary example of the effect of erosion in the higher mountains as to be a natural wonder and an object of historic and great scientific interest and it appears that the public good would be promoted by reserving this tower as a National monument with as much land as may be necessary for the proper protection thereof:

Now, therefore, I, Theodore Roosevelt, President of the United States of America, by virtue of the power in me vested by section two of the aforesaid Act of Congress, do hereby set aside as the Devils Tower National Monument, the lofty and isolated rock situated in Crook County. Wyoming, more particularly located and described as follows, to wit:

Warning is hereby expressly given to all unauthorized persons not to appropriate, injure or destroy any feature of the natural tower hereby declared to be a National monument or to locate or settle upon any of the lands reserved and made a part of said monument by this proclamation.

In Witness Whereof, I have hereunto set my hand and caused the seal of the United States to be affixed.

Done at the City of Washington, this 24th day of September, in the year of our Lord one thousand nine hundred and six and of the Independence of the United States the one hundred and thirty-first.

The Wyoming State Quarter Coin shows with an image of the National Monument area and the newspaper’s view of the natural formation, circa 1906. 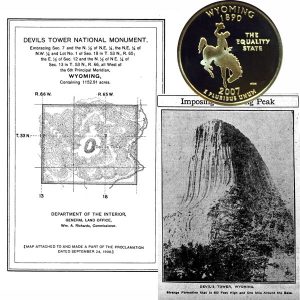