Today, the Grant Commemorative Silver Half Dollar Coin remembers when the telegraph operators across the country chose to strike on July 19, 1883.

Their alert to begin the strike noted that Grant had dropped dead on the streets of New York. (No one killed Grant; he passed two years later.)

From the Sacramento Daily Record-Union newspaper of July 20, 1883:

The Most Notable Strike Known to History — Some Significant Facts.

At high noon yesterday between 12,000 and 15,000 telegraphers in the United States left their “keys,” and the great current of news ceased to flow along the wires.

The commercial communications, which noted the pulsations of the markets of the continent, were checked, and there came to a dead pause one of the mightiest forces in the scheme of modern civilization.

The people of the nation were suddenly confronted with the fact that much of their comfort, a great share of their business, and the chief means of informing themselves of the world’s transactions, were dependent upon a band of overworked, underpaid and generally uncomplaining men and women, who at last had refused longer to have the manhood, womanhood and life ground out of them by a business association which has systematically starved its employees for a decade or more, set narrowest limits to their ambition and practically stayed their progress in the race of life in order to pile up exorbitant dividends for rich stockholders.

What are the facts? The Western Union Telegraph Company has, during the past five years, steadily reduced the wages of its employees and increased their tasks, until the aggregate of earnings it has wrung from them amounts to fully 25 percent, and they have few hours to call their own.

Prior to 1878 the employees were receiving such wages that first-class operators could make from $100 to $120 per month, in a calling demanding a very high degree of skill, most laborious and health-destroying habits, and deprivation of most of the privileges enjoyed by wage winners.

In that year the “sliding scale” of direct reductions was promulgated, which cut down wages from 5 to 25 percent, and did not lessen tasks.

Thereafter, whenever a vacancy occurred in a first-class position, it was filled by a worker who was compelled to take it at a materially lower wage than his predecessor, and thus another “cut” was gradually brought about.

Since then the girdle of oppression has been drawn tighter each year. Vacations are utterly unknown to the policy of this company; promotion has become practically impossible; increase of salary is forbidden; long hours of work are exacted, and youths who have remained in offices, after learning the business, have found it impossible to secure regular operator’s wages, except by leaving, going to some remote point, and finally working back to a position originally their due.

The one day of rest in seven in unknown to night operators, and day men are required to contribute one Sunday in five to the profits of the company.

With a business a hundred fold greater and more profitable than in 1873, the company actually pays its men less for more labor in 1883.

Men receive at telegraphy, for first-class skilled services, from $75 to $90 for night-work, and from $75 to the lowest figure possible below that for day work.

The operators have asked now for a rest day, for briefer hours of confinement, and for a restoration of wages for the future, still 10 percent below the figure they once received; in other words, 15 percent present advance.

The company refuses, and the electric wires are stilled.

That the heart of the people is with these men there can be no doubt; on this coast there is no question on that point.

There will be some inconvenience to the public, but the company, not the operators, is responsible for it.

It is the basis for no just argument against the equities of these operatives. By this system of low wages, long hours, no vacation and excessive tasks, the telegraph company has been steadily impairing the efficiency of the telegraphic service.

The public has been served, but far less satisfactorily than if the operators had been treated as men and women having human hopes, ambitions and desires.

Such few dispatches as may be received and published for a few days, it must be remembered, come over wires and through mediums controlled at this juncture by the telegraph company, and they should therefore be read with discreet suspicion, since the transmission of dispatches favorable to the operators can be easily delayed, or refused, with a semblance of reason.

The few operators who remain in bonds are silenced, and are not likely to disobey orders and transmit the whole truth to us regarding public sentiment at the East.

In this connection, the public will not forget that the self-announced friend of labor, the mendacious San Francisco Chronicle, an insidious foe to laboring classes, has pronounced against the telegraph workers, and stigmatized their manly, orderly and peaceful retiracy from a species of slavery, as unwarranted and without sufficient cause.

This is the journal that was first to reduce the wage of printers on the Pacific coast, and that has once been driven, from a second shameful reduction to a somewhat higher rate.

Its sincerity on any subject is to be measured by its greed, and its opportunities for gain, regardless of methods. In this instance it proves true to the personality behind it, and sneers contemptuously at the demand for fair wages, fair hours, fair rest and decent treatment of skilled workers by a company it evidently finds it to its profit to serve, by denouncing the telegraphers who have chosen rather to seek for other employment than slave their lives out for a company whose true interest it is to pay them weII and roundly for faithful service.

Milwaukee, July 19th. — About sixty operators struck here, leaving Manager Weller and his four chiefs at the wires. All quiet.

Cincinnati, July 19th.— The telegraphers’ strike at the main office of the Western Union Company occurred at 11:30. At that hour the local Chief of the Brotherhood gave the gavel three raps on the desk. The signal was obeyed by all the members of the Brotherhood rising and going immediately out. There was no confusion, no excitement. Only about half a dozen of the working force remained at the desks.

Chicago, July 19th. — At 12 o’clock, Washington time, the main body of the army of operators in the Western Union office in this city went out on their strike. The scene in the operating room was a memorable one. There had been a feeling of nervous excitement for twenty-four hours, and it had been wrought up to a high pitch by the almost absolute certainty that work would cease at 12 o’clock to-day.

Promptly to the stroke of the clock the keys were closed, and messages were left uncompleted. It is estimated to exceed one hundred operators who went out, fifteen or twenty being female operators. There was nothing boisterous, and there was a familiar shaking of hands with the chief operators, who remained loyal to the company.

Outside the building, and in front of the Chamber of Commerce, which stands opposite the Western Union building, a great crowd had gathered to witness the departure of the operators from the building, and there was some cheering as the head of the column of strikers made its appearance.

The operators at once marched from the scene to the headquarters of the Union to deliberate. When the operating room had been cleared, it was found forty operators were still at their desks, exclusive of twenty-one chief operators and officials.

The full effect of the strike cannot be stated at this writing, as there is a natural confusion anticipated by the officials, growing out of the large exodus, but it is expected the office will be in a fair working condition by nightfall.

The Wheatstone system of the company is in full operation, by which all New York business can be taken care of.

Colonel Clowry has received advices to the effect that Omaha, St. Louis and Cincinnati offices are in fair shape, and will be able to work along with their reduced force.

Shortly after the strikers had left the building, operators from the outside began to make their appearance in the operating room, and were given places. The “11:50” officials now confidentially assert that with the force now there at their command, and with certain prospects of new men, public business can be handled without serious friction.

Superintendent Humstons, who was present, said the number to leave was about what had been expected from the reports made to the company. In the operating room were stationed several policemen, and these, together with the officials who were present, assisted the strikers to move out as rapidly as possible, and to leave the building.

The operators who remained at their keys did very little work at first, and were interested spectators.

Long lines of operators were seen filing down the stairs. In their faces were depicted various emotion. The majority were hilarious, but there were not wanting those whose features bore traces of uncertainty and fears for the future.

Many wore thoughtful, and evidently appreciated that the strike might mean long weeks of idleness with a scarcity of salary. The general feeling was one of confidence, however, and a determination to win was the watchword.

As soon as the advance guard of strikers reached the basement hundreds of curious people, who were there and in the street and about the building, sent up a shout, thus spreading the news.

In a few minutes more the bulletin boards posted the facts, and the long-contemplated and much talked of strike had begun, and was fully known at all the news centers.

The general sentiment of the operators and officials was that the news of the country would be taken care of. Operators have only the kindest feelings towards the press.

Washington, July 19th. — At 1 p. m. ten men of the Western Union Telegraph Company’s day force in the Washington office stopped work. Nine are yet in the office, but the manager is not sure they will remain.

It is rumored here that the report that General Grant dropped dead in the streets in New York was the signal agreed upon to communicate to the operators to strike, it being well understood that the operators might be relied upon to spread that story promptly.

An active officer of the Brotherhood is authority for the statement that no strike is to be apprehended from operators working wires leased to brokers, newspapers or private individuals, where such operators are employed and paid by the lessees, unless an attempt is made by the Western Union Company to utilize these operators in handling matter connected with the business of rival firms.

Boston, July 19th.— All the operators here but two have struck. The women operators have also gone out.

The Grant Commemorative Silver Half Dollar Coin shows with an image of the Western Union Telegraph building in New York, circa 1888. 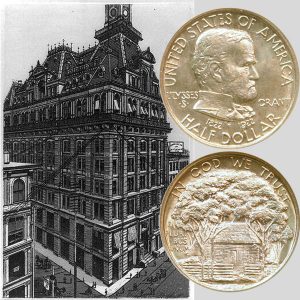