Today, the Florida State Quarter Coin remembers the centennial on July 10, 1921, celebrating the Spanish flag coming down in St. Augustine ending their rule in the Floridas.

The Spanish flag over the old San Marco fortress at St. Augustine, Florida, went down to stay down on July 10, 1821, and the American flag went up to stay up.

It meant a good deal, that ceremony of a century ago; today.

It meant for Spain the peaceful surrender of a region over which, with brief interruptions, she had ruled for more than 300 years.

For the United States it meant the elimination of a dangerous political contact and the acquisition of nearly 60,000 square miles of territory.

It was a transaction eminently satisfactory to both parties concerned. Unless sentimentally, Spain really did not need Florida. We did. We needed it geographically, we needed it strategically and we needed It for the great natural resources of the territory transferred.

The conversations leading up to this Important event began in the early part of President Monroe’s first term. John Quincy Adams was the Secretary of State. It was between him and the Spanish Minister, Don Luis De Onis, that the negotiations were carried on.

All was not plain sailing by a good deal. There had been collisions between Spaniards and Americans all along the Florida border for years before. There were various differences of long standing to be adjusted.

But President Monroe and Secretary Adams were adroit as well as firm diplomatic tacticians. In years as well as in mental habit both were in close and sympathetic touch with the dignified courtesies of the stately old Colonial days.

The rock of Spanish pride and sensitiveness, on which more than one project had split, was avoided. Difficulties were smoothed over.

On Washington’s birthday, February 22, 1819, the Spanish and Americans agreed. It took nearly two years and a half to unwind all the red tape of ratification.

As values go today not at all a bad Investment to hold even for as long a time as a hundred years.

It was on the site of St. Augustine that in 1513 the Spanish adventurer Ponce de Leon first set foot on Florida soil. At St. Augustine the first Spanish fortification was built. That was in 1585.

But Sir Francis Drake was soon abroad with deadly hatred of Spain and Spaniards in his heart. He swooped down on the little St. Augustine fort and captured it within twenty years after it was built.

His descent, however, was only the descent of the devastating cyclone. He left the Spaniard to repair damages and went his way.

The fort was rebuilt. And then, half a century after Drake’s whirlwind onslaught, the present fortress was begun.

Indian slaves did all the work; it took them an even hundred years to finish it. The fortress as it stands today was not completed until 1756.

For its day and generation it was a formidable stronghold. It represented the then last word in Vauban skill in fortification.

It is built of coquina rock, and coquina rock is a conglomerate of small sea shells quarried from the adjacent Anastasia Island and sun dried to great hardness. The size of the fort was commensurate with its strength. It had quarters for 1,000 men.

It was within these grim walls as they now stand that Spain bade farewell to the Florida that so long had been hers. From the spot where she first set her foot she took her departure forever.

The Spanish flag fluttered slowly down from the fortress staff. The Stars and Stripes leaped swiftly up it. Fort San Marco became Fort Marion and all was over.

Thus was the curtain rung down on Spanish rule In Florida, or rather in the Floridas, as they were then called, for there were two of them. East Florida and West Florida, which embraced originally a large part of what is now Alabama and Mississippi; the one bounded on the east, south and west by the Atlantic Ocean and the Gulf of Mexico and on the north by the thirty-first parallel of latitude, the other bounded on the north and south by the same parallel and the Gulf of Mexico, on the east by the Apalachicola and on the west by the Perdido River.

Contemporaneously with the hundredth anniversary of the Spanish retirement negotiations are afoot for the cession to Alabama of the westernmost part of the present State of Florida.

Alabama wants to gain a broader Gulf coast line and seeks to buy the necessary territory from Florida.

With the lands from the Apalachicola westward to her present Perdido River boundary she would have a Gulf front of over 200 miles instead of one of a scant hundred. From Florida she would take ten counties with approximately 7,000 square miles of land area.

The Florida State Quarter Coin shows with an image of Fort Marion, previously Fort San Marco, in St. Augustine, circa 1920. 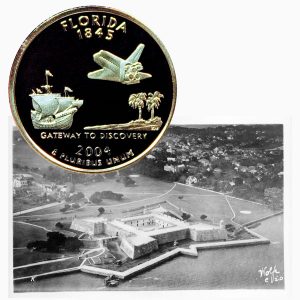