Today, the South Carolina State Quarter Coin remembers when the British began their bombardment of Charleston on May 9, 1780.

The Siege of Charleston began in late March, but it was May when the town became the main focus of the British firepower.

From the Battles of the United States, By Sea and Land, Volume I, by Henry Barton Dawson, published in 1858:

The arrival of Lord Cornwallis, with twenty-five hundred men, from New York, on the eighteenth of April, and the entrance of the fleet into the harbor, had enabled the enemy to strengthen the troops which had been engaged in cutting off the communication between the town and the country; prevented the completion of the works which General Lincoln had commenced on Lampriere’s Point; and, at Lenew’s Ferry, on the fifth of May, completed the destruction of the corps of American light troops and cavalry, which had been surprised at Monk’s Corner a short time before.

These advantages were strengthened, on the 24th, by the capture of the works on Mount Pleassant, near Haddrell’s Point; on the seventh of May, by the surrender of Fort Moultrie; and, on the same day, by the completion of the third parallel, with the guns in battery, and the traverses and communications complete.

The “canal,” or ditch, which protected the American lines, had, also, been sapped and drained; and the enemy’s Yagers had been thrown so far forward that they picked the Americans off while they were within the lines.

On the eighth of May the enemy summoned the town a second time, and terms were proposed by General Lincoln.

Alterations, which principally related to the shipping, to the militia being considered prisoners on parole, and to the march which should be beat when the Americans left the town to pile their arms, were proposed by the Admiral and Sir Henry Clinton, and rejected by General Lincoln, and, on the ninth of May, the fire was again opened by the garrison, and answered by the enemy.

At this time the enemy’s third parallel was completed in all its parts, coming within a hundred yards of the American lines; and from this, and from the other works, on every side, and from the vessels in the harbor, nearly two hundred heavy cannon, besides mortars, threw shot, shells, and carcases into the devoted town, from nine o’clock on the morning of the ninth, until the eleventh of May; and, during the same time, it was as steadily returned by the little garrison.

The fire-department of the town, with great perseverance, combated the flames wherever the carcases or bombs set fire to the buildings; sand-bags were prepared and used to repair the breaches or afford shelter for the riflemen on the lines; and the shrubbery which ornamented the gardens of the people was freely offered and used as fascines in the defense of the town.

The garrison and the inhabitants—with such slender defenses, so poorly supplied with stores and provisions, and so feebly supported by the militia of South Carolina—performed wonders, and after the surrender, their gallantry elicited the admiration of the enemy who had overpowered them.

At length their provisions failed, and rice, coffee, and sugar, were the only food of the garrison.

The intelligence of this fact soon reached the enemy’s camp, through the instrumentality of those wretches who had continued to hover around the American forces from the beginning of the war,—nominal friends, receiving their confidence and honors, and prostituting them to the enemy for the vilest purposes.

A shell, filled with rice and sugar, and thrown into the town, soon attracted the attention of the garrison, because it did not explode, and told, in terms of ridicule, that its distress was known to the enemy; when, in a spirit of proud defiance, the same shell, filled with hog’s lard and sulphur (itch ointment), was thrown into the Scotch regiments, in the parallels, inviting them, in contemptuous terms, to employ that remedy to cure their traditional national infirmity.

At length, worn down with fatigue, and with no immediate prospect of relief, on the eleventh of May, General Lincoln renewed the negotiations for a surrender; and, on the twelfth, the articles were signed, Sir Henry Clinton and Admiral Arbuthnot, although they had previously stated they would not renew the offer, “besides their dislike to the cruel extremity of a storm, not being disposed to press to unconditional submission an enemy whom they wished to conciliate by clemency.”

The loss of the Americans, during the siege, was only eighty-nine killed, and one hundred and thirty-eight wounded, among the Continental troops; three killed and eight wounded among the Charleston artillery, who manned the principal work on the lines; and about twenty of the inhabitants were killed in their houses: that of the royal troops amounted to seventy-six killed, and one hundred and eighty-nine wounded.

About eleven in the morning of the twelfth of May, between fifteen and sixteen hundred Continental troops— the entire force, except some five hundred in the hospital—marched out of the town, to a Turkish march, and, near the principal work on the line, between it and the ditch, they grounded their arms; and, soon afterwards, the militia and the male adults among the inhabitants, many of whom had never done duty in the lines, also marched out to the same place, for the same purpose.

In the loss of Charleston, notwithstanding his gallant defense, General Lincoln was censured by those who had not moved to its support; and the cause of freedom in the South received a terrible blow.

South Carolina became, in fact, a British province, and the enemy was now, more than ever, confirmed in his determination to continue the war until the whole Union should have acknowledged its allegiance to the King.

The South Carolina State Quarter Coin shows with an artist’s portrayal of the Siege of Charleston in 1780. 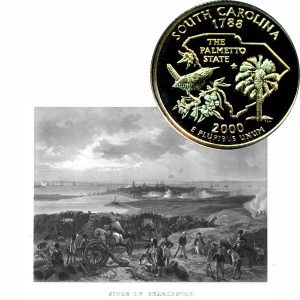