Today, the New Mexico State Quarter Coin remembers the start of the exposition on July 2, 1883 that celebrated the 333rd anniversary of the first European settlers on this continent.

Before We Were Born.

Santa Fe, N. M.. July 2. The much talked of and much heralded, the most unique and what promises to be the grandest celebration and exposition in many respects of modern times opened today in this ancient city of Santa Fe.

The liberality of the “Atchison road,” as it is called in Boston, or of the Santa Fe as it is known in Kansas, and its connecting lines in furnishing low rates of fare has insured the success of the tertio-millennial anniversary beyond per adventure.

The attendance from the western states and territories promises to be very large, while the recruits from excursion parties passing en route to California over the Great Southern and Panama line, and from tourists to Colorado and the many pleasure resorts in that territory and New Mexico will swell the numbers, who from curiosity and other causes will desire to witness the novel and peculiar features of this strangely unique and wonderful anniversary.

Just such a one can be nowhere witnessed except in this ancient city, with the oldest church in the United States and in the town first settled on this continent.

Nowhere else are the remains of the oldest and best of the ancient civilizations of American mingled and blended with the reminiscences of that grandeur and gorgeous and gaudy equipage that the Spanish cavaliers brought to these mountains and plains and planted here with the cross, and established to remain for near three centuries until Anglo Saxon civilization supplanted it and builded, and are building, more perfect and a more cultured society.

First came a artillery salute at 9 o’clock this morning, awakening hill and mountain and valley with its echoes , but its reverberations greeted no new voices in the primeval forests, for the sound of powder and gun had been heard here for three and a third centuries.

Upon arriving of the grand procession at the grounds the ceremonies of opening the industrial exposition commenced, Hon. W. W . Griffin presiding.

The address of Governor Sheldon and others was listened to with great satisfaction and loudly applauded.

The Indian races, games and dances in the arena were witnessed by thousands of eager and delighted spectators.

Another Account. Topeka. July 2. A special to the Commonwealth from Santa Fe, N M., says:

A month’s festivities, on the 333d anniversary of the first European colonization of the city of Santa Fe and the American continent opened here today under the most flattering auspices.

The grand procession was perhaps the most unique and interesting of anything of the kind ever attempted. The descendants of the first distinguished Spaniards that ever visited American soil, the native Mexicans, the descendants of the Aztecs, bands of Apaches in war-like attire, the rare, modest and oriental Zuni Indians, the flashing military, the martial music and the firing of cannon, all combined to make the scene one of the liveliest interest both to citizens and strangers.

Ten thousand people witnessed the procession and followed to the exhibition grounds, where able addresses were delivered by Hon. Lionel A. Shields, governor of the territory, Hon. Tranquilino Luna, territorial delegate to congress, and Col. W. W. Griffin, president of the tertio-millennial association.

They dealt with the ancient and modern history of New Mexico, spoke of the rapid advancement now making among the native people, and referred to our vast mineral and pastoral wealth, requiring only labor to reveal its riches.

Then the military bands played “Hail Columbia,” and the governor declared the mining and industrial exposition formally opened.

All the exhibits are placed in the main hall, and consists of precious ores from every mineral producing district in the territory, coal and coke, cereals, fruits, native jewelry, wools and woolen fabrics, works of art on wood and raw-hide, done in vegetable colors and hundreds of years old, the antiques of three centuries, etc.

The afternoon was spent in Indian games, racing, etc. Everybody pronounced the opening a magnificent success.

Commissioners are present from nearly all the states and territories.

Tonight the city is in holiday attire, and flags and bunting are flying from every house top, while two bands discourse music from the public plaza, in the presence of several thousand people.

The city is full of strangers, and every tram brings extra coaches full of visitors. Many distinguished guests from abroad are here, and will remain throughout the tertio-millennial anniversary.

The people are well pleased, and everything argues success throughout. Special interest centers on teh 18th, 19th, and 20th of July, on each of which days there will be a grand parage in costume by the organization known as the Knights of Coronado.

These parades each represent a century of progress in the history of the oldest city in the United States. The event is the most interesting and romantic in American history, and is coupled with the exposition, which sets forth in a  satisfactory manner the resources of the territory.

The New Mexico State Quarter Coin shows with an image of Santa Fe, circa 1885. 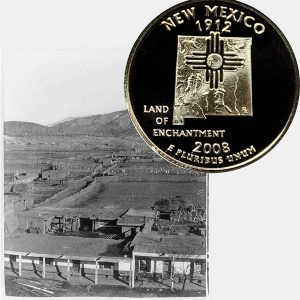